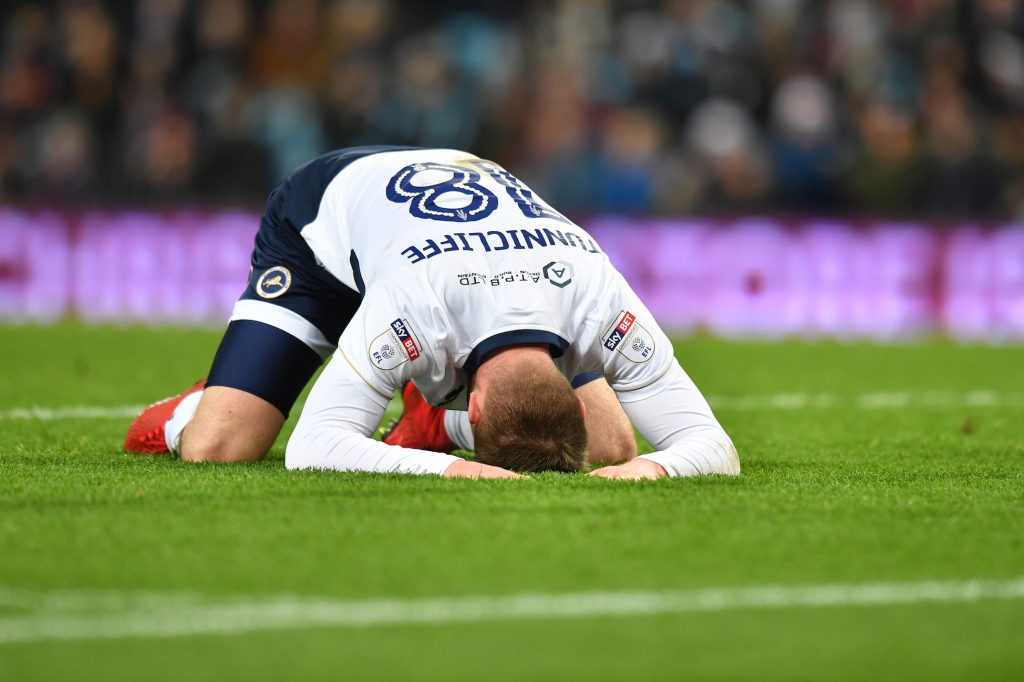 BY JAY TAYLOR AT VILLA PARK

Millwall have 18 wins in 2017 – their best total in a calendar year since 2008 – but Neil Harris had every right to question what that figure could be if they had converted more impressive displays on the road into three-point hauls.

Saturday was one of those afternoons. A first Championship away victory since promotion still eludes the Lions and they should have headed back to South London with that wait finally over.

Six points from a possible 33 does not tell the true story of how good Millwall have been in the backyards of opposition.

When told about their 11-year high, Harris said: “Think how many it could’ve been and should’ve been with the amount of points we have left on the pitch.”

The Lions have proved that they can more than compete at this level despite the financial advantage nearly every side enjoys over them in this division.

Harris made two changes at Villa Park – both enforced. Aiden O’Brien replaced Shane Ferguson, who is out for up to six weeks with a knee injury, and was the star man. David Martin made his Millwall debut in place of Jordan Archer, sidelined due to a viral infection.

As in many an away game this season, the Lions started off with a more cautious, defensive approach which saw them build from the back, sitting deep and hope to cause issues on the counter-attack.

Villa saw more of the ball but Millwall used their organisation and work ethic as effective weapons to negate the advances of Steve Bruce’s side, who have only lost once at home in the league this season.

Both sides exchanged jabs without any real power until just after the half-hour mark when the Lions had the first real opening of the afternoon.

Millwall broke from an Aston Villa corner. With George Saville leading the charge, it was a four-on-two situation but between Jed Wallace and Ryan Tunnicliffe, neither were able to turn the ball goalwards.

Six minutes later, a second break almost bore fruit. Wallace and Tunnicliffe combined before O’Brien drove forward only for his final ball to let him down and the attack fizzled out.

It was an uncharacteristic error on the day by O’Brien, who put on a virtuoso display. The attacker is too often a scapegoat of home fans when things aren’t going according to plan.  Saturday’s display should be a benchmark for the 24-year-old to hit on a consistent basis.

He was a constant threat and always an outlet for the Lions. Defensively, too, he set the tone with a solid tackle on former Scottish international Alan Hutton early on.

Millwall started the second half how they ended the first – on the front foot. They had a host of early chances which were mere sighters as they continued to stand firm defensively.

So much so, that winger Robert Snodgrass was withdrawn and replaced with Jack Grealish on the hour mark as O’Brien and James Meredith kept the on-loan West Ham man on the periphery all afternoon – much to the appreciation of the travelling 2,100 packed into a corner of the Doug Ellis stand.

Steve Bruce’s changes to try and shake Villa back into life didn’t really have the desired effect as the home fans became restless – and the Lions grew in confidence. Grealish had Villa’s only shot on target when his low effort from outside the area curled towards Martin, who was able to parry the ball wide.

The game was becoming stretched.

He was found in space down the left, cut in and from a tight angle hit shot kissed the top of the bar.

The Lions were a matter of inches away from pulling off a famous victory.

The point flattered Villa. Millwall raise their game against the big boys in the division, compared to being brought down to the level the teams at the bottom operate at.

That is a frustrating dynamic, but with the Lions working so hard  – with and without the ball – you know that things are heading in the right direction.

Even with a tough run of fixtures to come, it won’t be long before the Lions do get that winning feeling away from The Den.