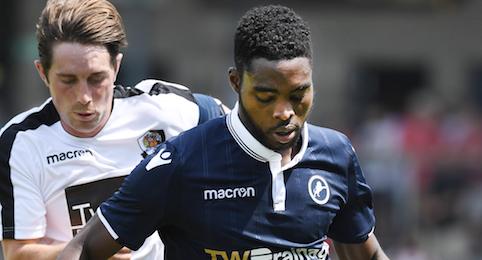 Fred Onyedinma is closing in on 150 first-team games for Millwall – not bad at the age of 21.

The Lions attacker seems to have been on the Den scene for ages. He was handed his senior debut against Southend in the FA Cup in January 2014 when he was only 17.

Millwall boss Neil Harris reckons that young players in the Championship are beginning to mirror their Premier League counterparts in maturing a little later.

Onyedinma, who also played 27 times during a loan at Wycombe Wanderers, was not a guaranteed starter in 2017-18 but still ended up with 42 appearances in all competitions.

“You can have all the experience in the world, but if you’re not that good then it’s irrelevant. You have to take your chance when you get it.

“I didn’t know I was close to 150 games, I knew I was over 100. You have to be grateful – because certain people my age are still playing for the U23s – but again you can’t just be satisfied. You should always want to push on.

“It was difficult because everyone was doing so well and after Christmas we went on that run. It was quite difficult for him [Harris] to change things.

Onyedinma’s versatility is a bonus. Not only can he play down either wing but he also played in a more central role – his pace a nuisance for tiring backlines.

Asked if he has a preferred role, he replied: “I have no idea, I’ll be honest with you. No idea.

“I’ve literally played everywhere. I’m adaptable to play anywhere along the front line. I haven’t found my specific position yet – I’m waiting to do that.”

The vast majority of Onyedinma’s senior action has come under Harris’ watch.

The Millwall boss said: “We have got Fred, Ben [Thompson] and Sid [Nelson] – all from the same youth team. Mahlon Romeo is at the same age as well but came in slightly later.

“It’s easy to forget how young they are. Because we blooded them so early and gave them games, it’s almost like: “Well, where are they? They should be in the team’.

“But if you look at the make-up of Championship teams and the players who perform under the age of 21, 22, 23 and even 24 – you very seldom see them having a run of games. That’s because of how tough the division is.

“Thommo is a much better player than a year ago, being around our squad every day and training with top pros. Fred has played 42 times for me this season – only 13 starts and 29 subs but a lot of those subs he has made an impact, either to win us a game or change it.

“When you are dipped in and out it can be difficult to get that steadiness to your game.

“Fred is young and still very raw, but there is a hunger to learn. He wants to play and score goals. Against Villa [on the final day of last season] he showed exactly what he is all about.

“Yes, he is frustrating at times. I certainly accept that, the players do and the fans have to – they are becoming more patient. He is going to give the ball away at times but he can also get them off their feet, get us up the pitch and score. He wins us free-kicks, throw-ins and corners. He’s certainly got the potential to be a top Millwall player – as a striker and a wide player.”

Millwall’s players have just returned from what is becoming a traditional training camp in Portugal.

“Going to Portugal makes us get closer and that pushes on to the season. What’s the big factor in football? Team spirit. You can’t do anything individually – so having a good team is going to be good for the season.”