Gary Rowett has revealed he was torn about loaning out Hayden Muller – but believes it will benefit  Millwall in the longer term.

The 19-year-old central defender has joined St Johnstone for the 2021-22 season.

Muller is set to play European football for the Saints, who won the League Cup and Scottish Cup in the previous campaign under former Lions assistant manager Callum Davidson.

Danny McNamara made the same move to the Perth club and was recalled in January, going on to dislodge Mahlon Romeo from the right-back spot in SE16.

James Brown and Isaac Olaofe also joined St Johnstone last season, although the latter cut short his stay after a lack of game time – going on to spearhead Sutton’s attack as they won promotion to League Two.

“We had a really difficult decision because I believe Hayden is very, very close to being around that starting 11 selection process,” said Millwall boss Rowett. “But Hayden and Tyler [Burey] have done that for a season and a half and what you can’t do, with a young player, is stop the development.

“Our gamble is that we lose out a little bit but then gain long term.

“He needs to go and play men’s football. You are always looking for somewhere you can trust and we’ve built a very good link up with Callum and St Johnstone, partly because I know how Cal works – very similar to how we work. He plays a very similar system. I speak to him most weeks anyway.

“I remember having the conversation with Cal, when we first started working together, and he said: ‘If I had a young player, I’d send them to the SPL’. I thought he was just being pro-Scottish, because that is what he is, but he was right.

“He explained that one minute you can be playing a smaller club away with not many fans, in a difficult game, and the next it could be in front of 50,000 at Ibrox. He’s also got European games as well – there is a real mix of challenges for Hayden.

“His first challenge is to go and get in their team. We feel he has got great potential.

“He’s got to go and get bashed about a bit, to see where that potential is. But I’m excited to see how he does. I’ve got mixed emotions seeing him go, but we can’t afford for him to only play two or three games again. We need him to play more than that.” 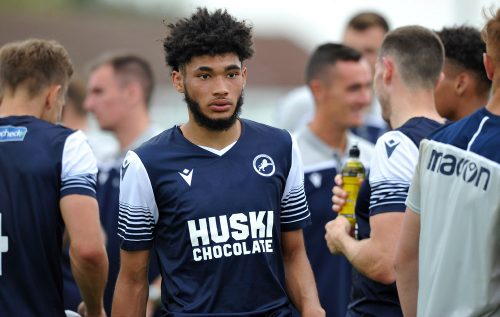 Winger Burey has made 16 appearances for Millwall since arriving from AFC Wimbledon in July 2019.

Olaofe and centre-back Alex Mitchell, who impressed on loan at Bromley in the final weeks, both have EFL interest.

“Tyler has made a lot of sub appearances for the first team and he is another one who we need to make starts, otherwise he is not going to be able to fulfil his potential,” said Rowett.

“If he comes back and performs really well pre-season then I’ve got a decision to make. Ultimately if we can find a very good loan for him, then we’re in the same position.

“I think it’s been a long time since Millwall have been in the position of having two or three in the first-team – and three or four out on loan in the league – that could play for our team within the next 12 to 18 months.

“That’s obviously the plan we’ve had with Fitzy [Scott Fitzgerald], Robbo [Paul Robinson] and Nuge [Kevin Nugent] – we want to make good decisions to allow those players to develop.”