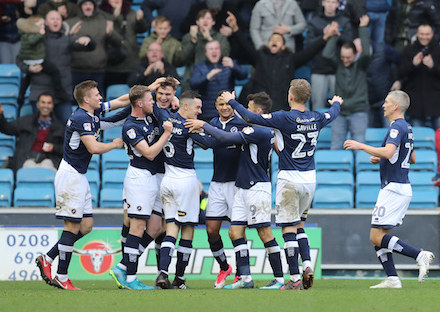 Neil Harris reckoned Jake Cooper should have bagged himself a hat-trick as his Millwall team drew 2-2 with Wolves at The Den, writes Jake Sanders.

Cooper netted a late equaliser for Millwall after goals from Diogo Jota and Romain Saiss had turned the game in Wolves’ favour, but Cooper ensured a share of the spoils with 20 minutes to go.

Despite the former Reading centre-back’s goal, Harris felt he could have bagged more.

“It’s fine being that big, but he attacks the ball properly and Jake will probably be the first to admit he should be sitting in the dressing room with the match-ball today.”

Cooper’s late header was his second goal of the season after netting Millwall’s third against Sheffield United at the beginning of the month.

Harris continued: “He has got two goals this year, but Jake Cooper should be scoring eight to 10 goals a season. Aiden Flint set the benchmark at Bristol City for centre-halves scoring goals and Coops should be right on his coat-tail.”

Lee Gregory had given the Lions an early lead, but Jota struck on the stroke of half-time and then Saiss’ long-range strike put the league leaders in front.

“We had to be brave, we had to use it wisely. We had to get the mix between being direct and get the passing moves going. The fact we scored two very different goals, but two very good goals in their own right. But, it’s the three or four chances we created.

“Jake Cooper should have scored two more with his head, Aiden O’Brien should have scored a tap-in at the back-post, Lee Gregory had a chance one-on-one, which probably evens out the boy Costa’s effort, because he was through one-on-one. I thought we had the best chances, but limited their chances from shots from outside the box.”