Neil Harris says he knew his Millwall side were bang up for Saturday’s FA Cup fifth round tie as soon as they arrived at AFC Wimbledon’s ground.

“Pearcey’s leadership and winning mentality was there for everyone to see at the weekend. He really marshalled the back-line impressively.

“I just thought our desire to want to win the game was huge. I could see the boys were up for it the moment we turned up at the ground. The body language and temperament was perfect. 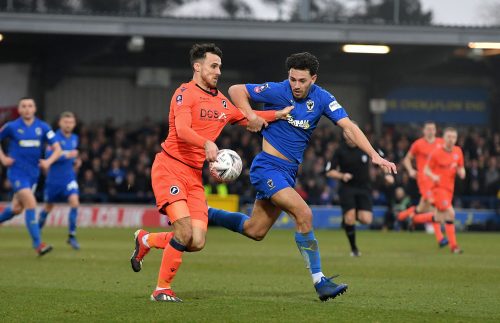 “We could’ve got a second goal to make it a little more comfortable but at the other end I never felt in danger that we were going to concede unless it was one that ricocheted into the net or it’s a 30-yarder which flew into the top corner. We were never under any pressure and very much in control of the game.”

Tom Elliott made his return from a dislocated shoulder as he came on in the second half against his former club. He had sat out last Tuesday’s 0-0 draw with Sheffield Wednesday due to a bacterial infection.

Harris said: “I thought that about 30 minutes would be great for him. If it had gone to extra time I’m not sure if he would have got through the whole of that. But there is the opportunity then to make a fourth sub, so there was no real danger there.

“It gave us the opportunity to give Hutch a rest as well. He has been in top form recently, he’s really been back to his best, but I felt it was important to give him that rest before going into another busy period.

“He comes back into the thinking for Derby. It’s great for us to have a fit Tom Elliott, Ben Thompson, Ben Marshall and Fred [Onyedinma] back available. It certainly gives us options.”