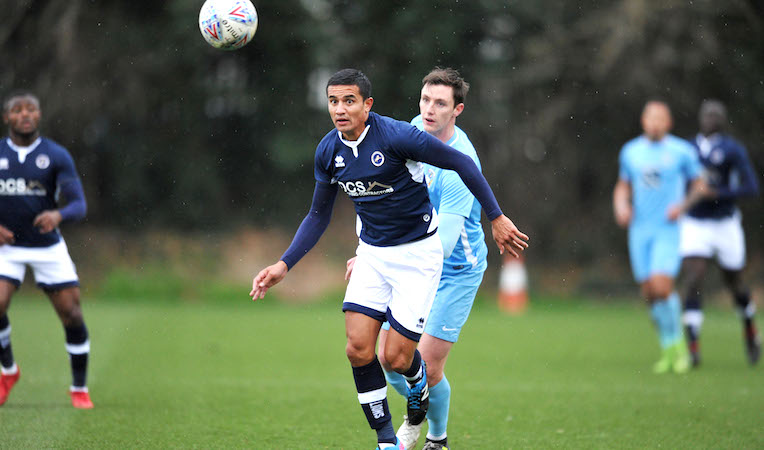 Millwall Sport
13 February 2018 Richard Cawley 0 Comments
By Richard Cawley
richard@slpmedia.co.uk
Neil Harris has admitted it was a slight risk bringing on Tim Cahill in Friday’s 1-1 draw with Cardiff City – with the Millwall fans’ favourite still honing his fitness levels.
The 38-year-old Australian international was a 90th-minute substitute. It was his first appearance for the Lions at The Den since he played on May 9, 2004 against Bradford City, as that summer he was sold to Everton.
Cahill rejoined Millwall last month and the ultimate aim is for him to make the Socceroos’ squad for June’s World Cup finals in Russia.
Harris says the Championship side will have to pick and choose their moments to use the veteran.
“He is an impact sub, certainly for where he is at the moment fitness-wise.
“He was in the squad at the weekend but that doesn’t mean he will be in every squad or that he’ll be coming on the pitch every week.
“He is with us, the group, to get fitter. It was a bit of a gamble to put him in the squad at the weekend but I felt we all wanted that little boost  for a big game, live on Sky – that it might just need a 10 or 15-minute cameo from Timmy to get us over the line or get us a goal.
“He has still got a long way to go with his fitness. You won’t see him start a game for a while.”
Cahill left Melbourne City in early December after playing just 94 minutes in six A-League fixtures.
Asked if the Sydney-born striker could land inclusion in the Australia squad just be gaining sharpness during his Den stay, Harris replied: “Match minutes will help his cause, that is obvious.
“But the fact he is training at a Championship club, with good players and a team who play at a really high tempo will be of benefit.
“When we train, we train properly. We’ll work closely with the Socceroos to get them all the information they need so that they know where he is at.
“Hopefully we can support his opportunities to get to the World Cup.”
Lee Gregory scored his seventh goal of the campaign at the weekend. He has bagged three in his last six outings.
Harris said: “I’m sure he’ll have set himself a target to try and get to 10 goals and then crack on, that’s what a goalscorer does. But there is no target from me.
“Of course I want him to score goals but his work ethic and team play – the way he enables us to get up the pitch – is much more important for me.”