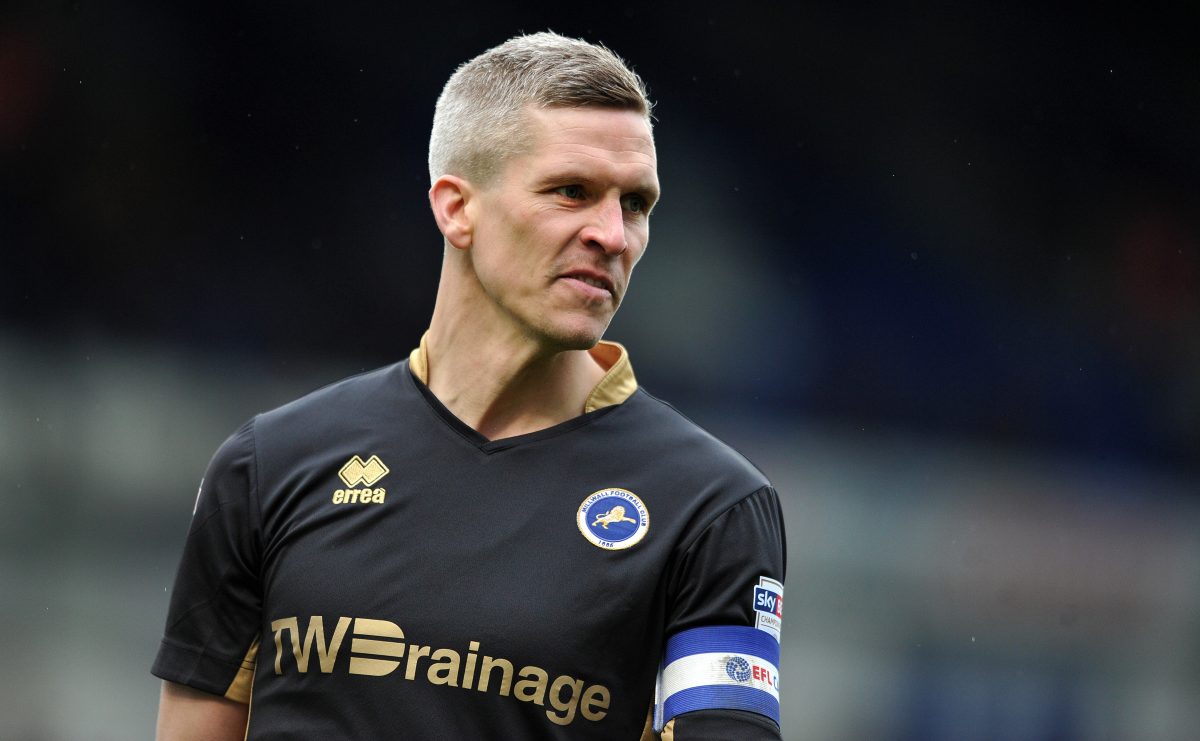 Steve Morison is still convinced that Millwall will reach the Championship play-offs – and would fancy another crack at Fulham over two legs.

The Lions saw their 17-match unbeaten league run ended by Slavisa Jokanovic’s side on Friday night.

But there is every chance that the two London clubs could rematch in the play-offs if Millwall secure the sixth and final play-off spot.

Morison has already spoken recently about the Lions only feeling pressure “when” they get back to Wembley. And that choice of word – rather than “if” – was no accident.

“We believe if we get into the play-offs then we’ll be there,” said the 34-year-old, whose goal won the League One play-off final just over 12 months ago.

“I don’t think if we play Fulham over two legs they will be overly happy about that. Anything can happen. They could’ve been 3-0 down after 20 minutes, quite easily. That is not me talking out of my backside – it’s a fact.

“Anyone who watched the game can see we could have had at least two goals, then it is a different kettle of fish because we don’t have to come out, we can sit in our shape. They couldn’t break us down in the first half and who is to say they could do it again in the second half?

“If we get in there we’ll be a match for anybody. It would be a very wise bet on us to get to Wembley again.

“It was a massive kick in the teeth on Friday night – we’d all forgotten what losing felt like. But it is mental to think that Millwall had forgotten what it was like to lose in nearly the entire year. It’s crazy.”

Manager Neil Harris supplied some context to the Lions’ progress last weekend – pointing out that they lost 3-0 at home to Oxford a year ago. It left them needing to win at Bristol Rovers on the final day to secure a top-six finish.

Meanwhile the likes of Sunderland, fresh out of the Premier League, have suffered back-to-back relegations.

“They are a shambles of a football club – everything about it is a shambles,” said Morison. “That’s what happens when you’re not all signing from the same hymn sheet, like we do. They have been just staying in the Premier League the last few years, then gone down and maybe thought they would be comfortable at this level. They have shown they are miles off it.

“We have slowly gathered steam. We have been doing this well all season but just didn’t get it right in the final third, but we were normally getting it right at the back. Once it all gelled together we have shown we are a force against anybody.

“We have had some fun times this season, really enjoyed ourselves. That happens when you’re winning and drawing – not losing.

“It [the play-offs] is not over. There are still six points to play for and if we win both then I think we’ll be playing football until the middle of May, at least.”

Morison has had the most expensive moves out of the Millwall frontline but they barely compare to Britt Assombalonga’s £15million switch from Nottingham Forest in the summer to tomorrow’s opponents Middlesbrough.

It draws a smile when you ask what a Steve Morison entering his prime would cost in the current game?

“I was worth £2.7m or £3m when I went to Norwich – the money has gone crazy now. I don’t think you can compare players from 10 years ago to now or even five years ago to now.

“Every transfer window the prices are going up and up. If you look at how much money they have spent and they are scrapping around for fifth or sixth, the same as we are. If you look at that it shows how well we have done, and we have done it with a bunch of players who were not wanted by other teams in this league as well.

“I’ve said it before, if you have a good group giving it everything then we can go a long way.”

Boro have changed manager since their 2-1 defeat at The Den in mid-December with former Crystal Palace chief Tony Pulis replacing Garry Monk.

At that stage the Lions were 17th, 11 points behind sixth-placed Sheffield United.

“I don’t think they are overly that much different to the team we played down here in terms of personnel,” said Morison. “We were very, very good against them at our place. Everyone was in total shock and disbelief that we turned someone else over.

“We’ll just go out and do what we do. Tony Pulis has gone in there and made them very organised – set-pieces are key for them. [Adama] Traore is on fire since the turn of the year. I think he has a couple more assists than me, making him top in Europe since January.

“It is two teams who both work on set-pieces and are physical – it should be a good match.”

Derby’s 3-1 win on Tuesday night against Cardiff City moved them back into the play-off places and nudged the Lions into seventh spot.

“Our matches were must-win regardless,” said Morison. “The only thing that changes is that it is out of our hands and we have to win the last two matches to give ourselves a chance to get in the play-offs.

“If Derby do their job and win the last three games then fair play, they should be in the play-offs. If we lose one it could be all over.

“But I’m confident. I still think it is going to the last game of the season. Everyone feels pressure at this time of the season – you can’t not. Especially those teams that have to make it into the play-offs.

“There is massive pressure and pressure does strange things to people.

“We had a couple of days off over the weekend, to spend time with the family, and came in on Monday to start preparing for Middlesbrough.

“You can’t dwell on it [the Fulham defeat]. We lost a game of football – no-one died. We’re going to go again in a massive game on Saturday.”