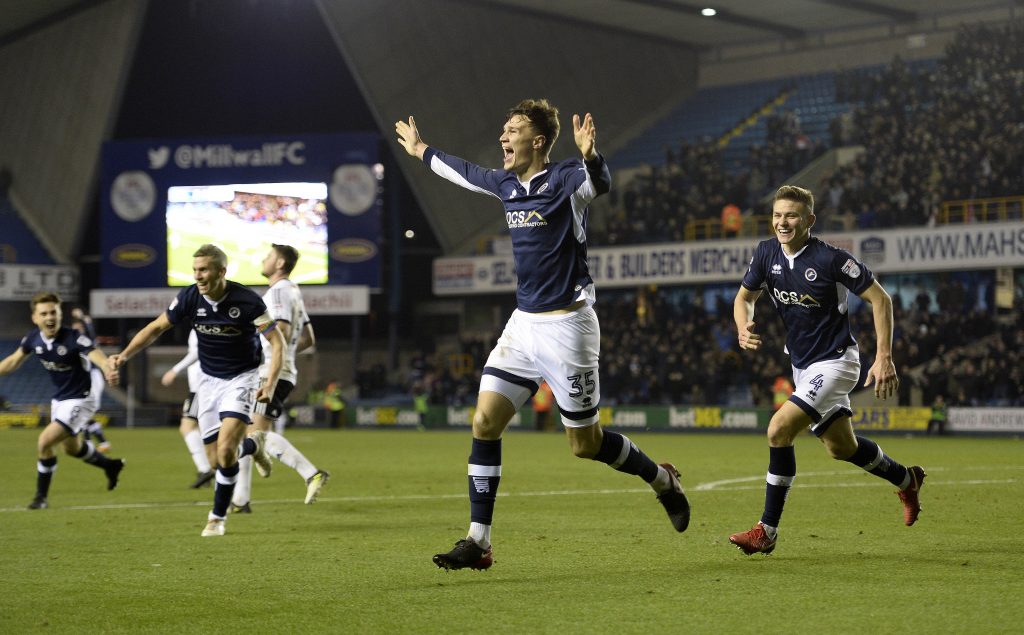 Jake Cooper is off the mark for Millwall this season – but insists he doesn’t feel any extra pressure to be a set-piece finisher.

When it comes to picking out a target in the opposition’s penalty box, they don’t come any bigger than the former Reading centre-back.

At 6-foot 4-inches tall, he isn’t exactly a hidden threat.

And Cooper showed his power in the air in Saturday’s 3-1 win over Sheffield United as he climbed above marker Leon Clarke to head Jed Wallace’s free-kick in via the underside of the crossbar.

But the Ascot-born defender says he already puts expectations on himself to get on the end of any dead-ball deliveries.

Eleven minutes before Cooper got his first goal of the Championship campaign – his third in total for the South Londoners – he was a whisker away from sliding in Shane Ferguson’s free-kick.

“I was very pleased to score,” said Cooper. “I was waiting for that. I missed one a few minutes before at the back post and I was gutted.

“I was so close. It just took a touch and I lost sight of it. I couldn’t move my feet quick enough in the end.

“But I was glad to get the header – I’ll take that over the little tap-in.

“I don’t feel pressure [to score more due to his height]. I want to score as many goals as I can and help the team out. I go up for every corner and set-piece to do my best and try to score.

“We work on set-pieces out on the training pitch. We are a big threat from them.”

One skill needed is to evade your marker. So often shirt-holding goes either unpunished or unnoticed by officials.

“You do have to be careful,” he said. “If you let players have a free run it can be dangerous – as you see with people who mark zonally from set-pieces. You have to have contact but not cross that line of too much contact.

“You get a lot of scuffling. For me it is just about concentrating on the ball, trying not to get too involved with the defender and attacking it as clean as I can.”

Neil Harris’ successful period in charge of the Lions has seen them rarely deviate from a 4-4-2 formation – only changing to a 4-3-3 when they are chasing a result.

But last weekend saw them shift to a 3-5-2 formation which allowed Ferguson and Wallace to operate as wing-backs.

“We’ve never worked on it,” said Cooper. “The last time we played like that was for a short spell up at Bramall Lane against Sheffield United. It was a bit of a surprise for the lads at half-time but it definitely wasn’t one we were worried about. We took it in our stride.

“We’re delighted with the result. We played well. We had a great first 15 minutes in the game. We scored, then we sat a bit deep and let them come on to us a bit.

“We changed our formation at half-time and matched them up. It just shows the quality of players we have got that we can do that against a Sheffield United side who were third in the league and go on and beat them in the second half.

“It’s not too dissimilar from 4-4-2, just personnel in slightly different positions. We needed more players in the wider areas – that’s just how we dealt with it.

“The gaffer made a big call at half-time to make us change to that formation and it paid off.”

Cooper’s run in the starting line-up started in mid-September when Byron Webster suffered a major knee injury which quite conceivably has ended his season.

The Lions have produced four clean sheets since then, three of those coming at The Den.

Only Wolves (seven) and Cardiff (nine) have conceded less on the road in the Championship than Millwall (10) as they head to Aston Villa tomorrow.

The prolific Clarke did not get a sniff of goal last weekend.

“I’m happy,” said Cooper. “Defensively we have been really good. I’m loving every minute of playing.

“We just faced him like any other striker in this league. There are plenty of top strikers around that we’ve played against already.

“Whoever was up there we were going to make it difficult for them.”

Harris said there will no fear as Millwall head into a tough December schedule – including a home clash with leaders Wolves. And Cooper agrees that there is no scare factor: “Not at all. We take teams exactly the same this season as we did last season.

“Aston Villa are doing very well and have a great manager in Steve Bruce and great players in their ranks. We’ll go there fully-equipped and do the best we can on the day.

“I’ve been there to watch a game, I’ve never played there. It will be great. This league is obviously so strong. We know we’ll have brilliant support there. It’s one we definitely look forward to.”

Millwall’s Midlands mission will not see them face the most high-profile player in the division – John Terry. The Chelsea legend has broken his foot and is unlikely to return until the new year.

“He was someone who I massively admired,” said Cooper, a Tottenham fan. “He was England captain when I was growing up and a top defender in this country for many years. It would’ve been nice to play against him but his absence is not down to us. They are top quality in all positions – no matter who they have got on the pitch.”