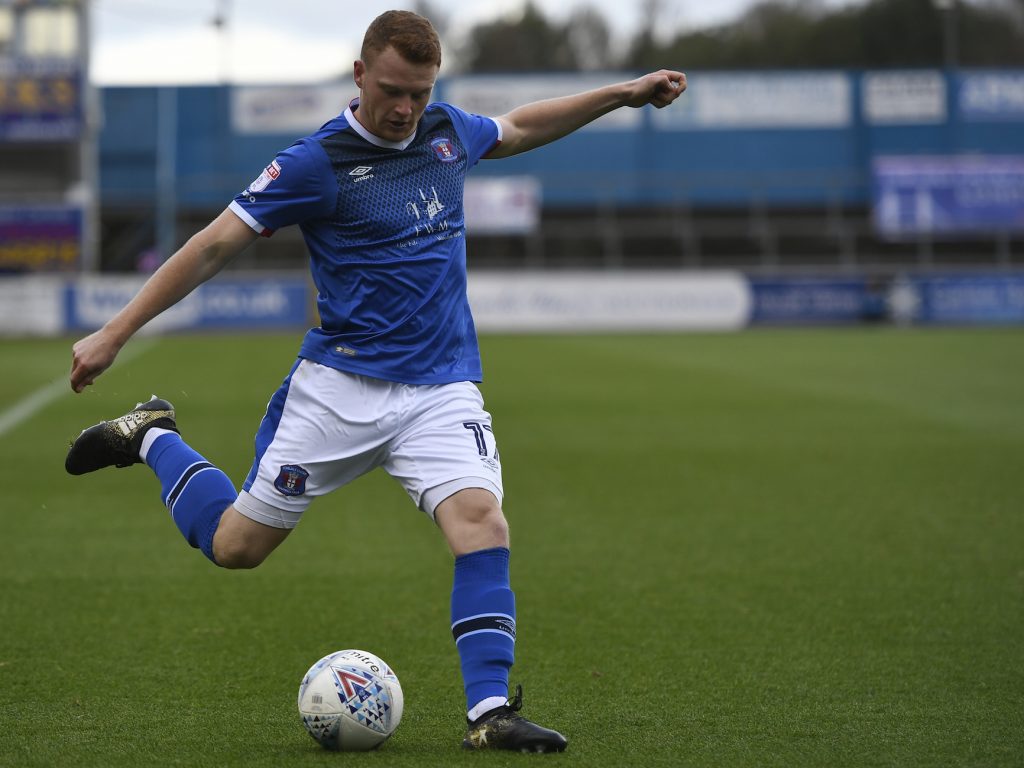 James Brown is feeling good – and that is no surprise considering his performances on loan for Carlisle United.

The Millwall right-back has been a regular for the Cumbrians in League Two since heading to Brunton Park at the end of August.

Brown saw a temporary move closer to his Dover roots fail to materialise. A daily 800-mile round commute was out of the question. But the 19-year-old has flourished after moving outside his comfort-zone.

“There was another club linked closer to home that fell through earlier in the transfer window,” said Brown. “I also had other clubs interested, but Carlisle did very well last year.

“I heard how the manager [Keith Curle] likes to play good football and it seemed the most attractive option.

“Since I’ve been here it has been brilliant. It’s something I’ve got to do if I want to get games.

“I knew Carlisle was one of the most northern clubs in England. I looked it up on the internet and it is miles away. I’m in Dover, so it is literally one end of the country to the other – a seven-hour drive.

“The main thing was to come here and try to prove myself.

“My family came to their first home game on Saturday against Oldham in the FA Cup. If we are playing away or in London it is not too bad for them.

“At the back end of last season when Millwall got promoted I knew I wouldn’t get a chance in the Championship.

“All summer I knew I would need a loan. I did my pre-season at Millwall and then it was a bit of trial period with Carlisle, to see if they liked me and I liked them.

“It was a bit of security for both parties. I’ve never played mens’ football as such – they probably wanted to make sure I was up to it. The move went through about a week later.”

The EFL Trophy was Brown’s senior debut for the Lions in October 2016 – a 2-1 win over Gillingham at The Den.

And it was the same oft-criticised tournament which sparked his run in the Carlisle side, making his bow for the League Two club in a 2-0 success at Morecambe.

“It’s strange because making your debut is something you have wanted all your life but it is also what you have worked towards for a long period – so you can’t get over-hyped,” said Brown. “Everyone has their own thoughts on the competition but for us young ones it gives a platform to get a first-team match and impress.

“I pulled my hamstring against Gillingham and had problems after that – I did it twice more that season. Last year was a bit injury-hit. I missed half a season through hamstring troubles.

“I can’t complain. The trophy has given me my debuts for Millwall and Carlisle.

“I got my first League Two appearance against Coventry and have kept my place at Carlisle. I didn’t expect to get an opportunity that early, I thought I’d have to battle it out.

“It’s better than chilling and playing under-23s football. There are some good aspects of that level, but you can’t really be judged until you go out and play in front of a crowd and it means something. Everyone is in it together, you need three points and are trying to achieve something.

“It has been a big help on the mental side. It’s made me grow up. Mens’ football is completely different to the development stuff.”

“As a player, no matter what level it is at, you get to judge your direct opponent pretty early in a game,” responded Brown. “If you look up to it then they give you a bit more respect.

“There have been games, for example, where the striker has pulled onto me for goal-kicks. But that is the same in any division. If you have weaknesses then experienced opponents will exploit it. I don’t feel I have struggled or felt uncomfortable at any stage – that is a good sign.”

Brown signed for Millwall at 15 following his release by Gillingham. And he pulls no punches about the reason why he was let go by the Kent outfit.

“Looking back at the time it was obvious. I was told I was not technically good enough – but I was overweight. I was only 11 or 12 at the time. I left and played local football, including Dover under-15s.

“Millwall offered me a one-year scholar and I then got a professional contract. The way it worked out, after getting released, is good. I’ve got a different pathway to some other boys who have been in the academy system a bit longer.”

Brown’s current Lions deal is due to run out next summer but Millwall are in discussions to extend it.

“Coming through the youth system at Millwall was good because I had Livers [David Livermore] as my under-18 manager and he is assistant boss now.

“It’s a club where everyone knows everyone. You never feel isolated from the first-team staff or players.

“Millwall gave me my chance. I’d love to break through to the first-team at some point but I know now is not my time. I need to wait for my chance, and rightly so. If there are better players ahead of me or I am not good enough yet then I have got to keep developing. But that is the ultimate aim.”

His decision about which club to support as a kid will go down well with Lions fans.

“My dad supported West Ham and he said it was a choice between them and Arsenal,” explained Brown. “West Ham were crap back then and Arsenal were winning everything.”