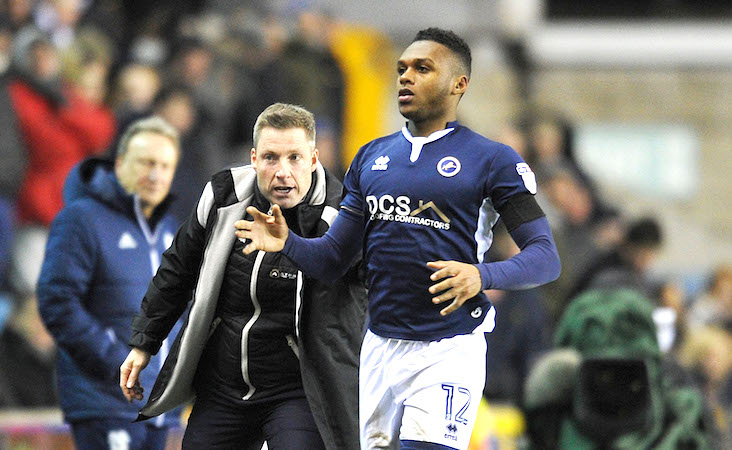 Millwall Sport
13 February 2018 Richard Cawley 0 Comments
By Richard Cawley
richard@slpmedia.co.uk
Millwall boss Neil Harris has praised Mahlon Romeo for the way he recovered from a costly early mistake in Friday’s 1-1 draw with Cardiff City.
The right-back, 22, was dispossessed by Junior Hoilett, who went on to smash the Welsh side ahead with just four minutes on the clock.
Harris said: “Mahlon’s response was outstanding. You could see his disappointment and what it meant to him. Let’s not forget he was booked after two minutes and was up against their most dangerous  player.
“I was really impressed with his next 10 minutes. He went really solid, took no chances and grew into the game. Some of his runs forward were top-drawer. It is definitely a learning curve for him.
“He is still only at the 70-80 game mark, so playing against a top side vying to get into the Premier League is a great experience – you don’t always get the time on the ball that you do in other games.
“The crowd got behind him and his team-mates certainly did. You saw their reaction to keep him going – that is a sign of the team spirit.
“It’s not the be-all and end-all, but 100 career games is an important milestone. As a young pro, coming in and out of the side, you are usually talking about three or four years of football. I don’t think you really settle down until after that.
“I like the 100 games as a mark of finding your feet and when you get to 200 you are established as a senior player.”