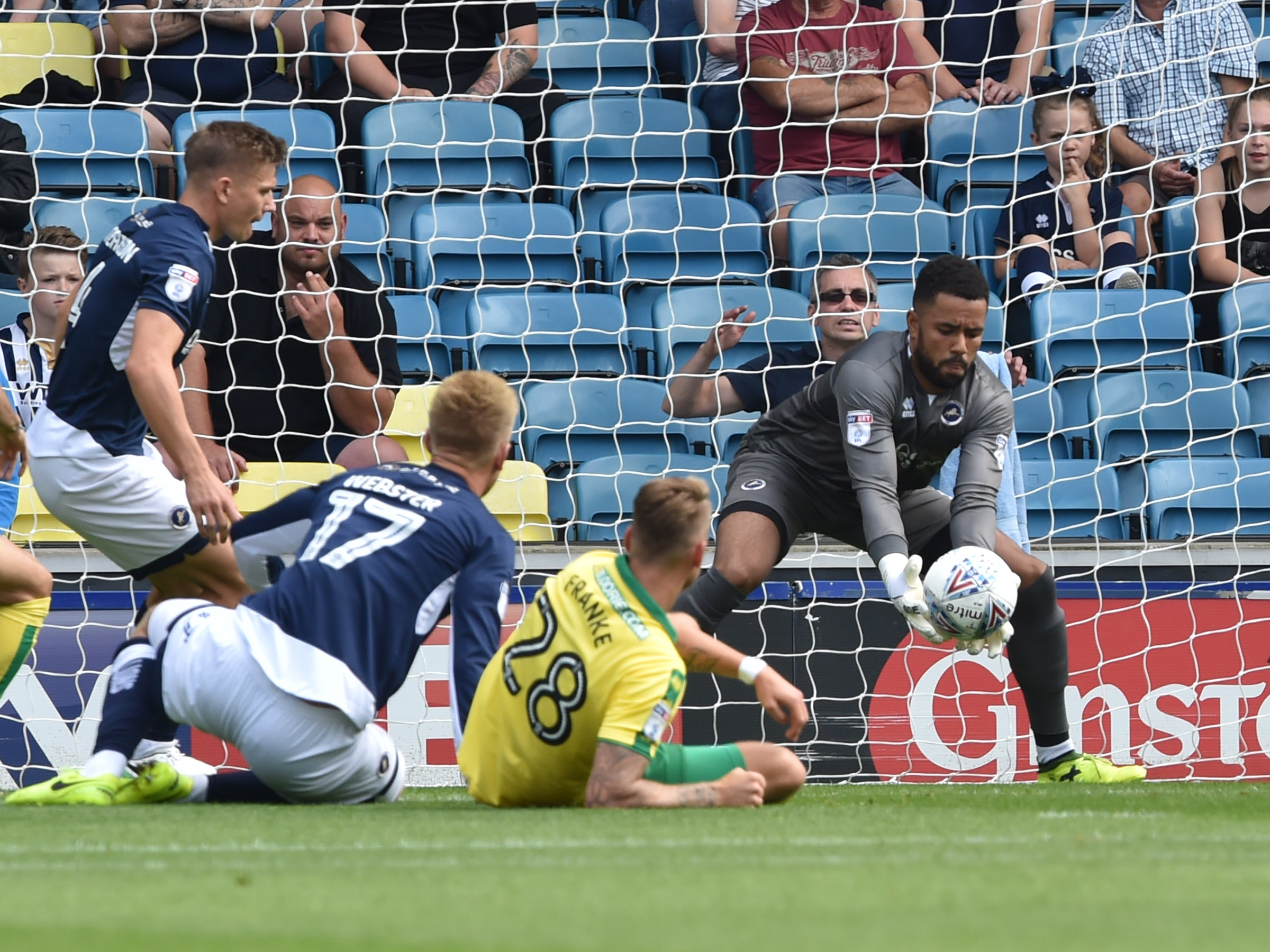 Life is pretty good for Jordan Archer at the moment.

The Millwall goalkeeper earned a first call-up to the senior Scotland squad in August and also made Gordon Strachan’s playing party for the last international break as the World Cup qualifiers came to an end.

Archer, 24, has been a consistent performer for the Lions and collected a fifth clean sheet in 13 Championship appearances in last weekend’s 2-0 win over Birmingham City.

But the stopper has spoken about how vital Lions goalkeeping coach Kevin Pressman has been to his development.

“He is fantastic to learn from,” said Archer. “As a keeper there is always ups and downs – some struggling times as well as good times. To have someone like Kevin Pressman around has helped me massively.

“I made a mistake against Ipswich at the start of the season, but since then I haven’t looked back.

“Nowadays you see a lot of young goalkeeping coaches – but I’d choose Kevin over another other one. When times are hard he has been through it. He always has the answers and advice.

“He had a fantastic career, playing a number of games at the top level in this country. I’d like to emulate that as well.”

While Pressman is a sounding board for Archer, he talks about his own mental toughness in a position where mistakes are magnified and also come with an extra layer of criticism.

The former Spurs trainee has played at every level in the Premier League and has 134 matches under his belt.

“It’s natural for a goalkeeper to have a dip in form from time to time,” said Archer. “I’ve always backed myself. I’ve always been a confident goalkeeper. Even if I make mistakes I will pull it around.

“Some of the performances I’ve put in for the team this year definitely cover those mistakes I’ve made. It never plays on my mind. You’ve got to be really thick-skinned and believe in your own ability. That’s something I’ve got in abundance.

‘I’m enjoying my football in the Championship. Football at this level gets more scrutinised. Standards have risen and the gaffer has done well in terms of preparing us for that. It’s definitely a step up from League One but it’s a challenge we’re all enjoying.”

Archer had been capped at under-21 and under-19 level for Scotland but it took promotion at club level to make the breakthrough to the main squad.

“Now I’m in the Championship and feel like I’m holding my own there. It’s about time my performances have been noticed – thankfully they were. I’m grateful to Gordon Strachan giving me my first call-up.

“I’m under no illusions I am going to go and play. I’ve got established goalkeepers ahead of me. I’m being like a sponge, taking everything in and learning a lot. The natural progression in a couple of years time is to be knocking on the door for a starting place.

“At the moment I’m just happy to go and learn from the best.”

A shorter-term target for Archer is to play his part in Millwall claiming a first victory on the road.

Tomorrow they head to a Cardiff City side who have yet to lose on their own patch this season.

“In the first 13 games we have been more than comfortable – there has only been a couple where we haven’t been the better team,” said Archer. “We’ve been unfortunate in a few games and taken a few draws when we should’ve won.

“At QPR we went 2-0 up, were unfortunate to get a red card and just couldn’t hold on. We’ve been unlucky a numerous amount of times. I’m sure we’re not too far away from that first away win.

“Cardiff are a good team with a good manager. There are a lot of teams in this division who are possession-based but Cardiff are like us – they mix it up.

“It will be a tough game – but we don’t fear anyone. If we keep playing like we have been then we’ll be fine.”