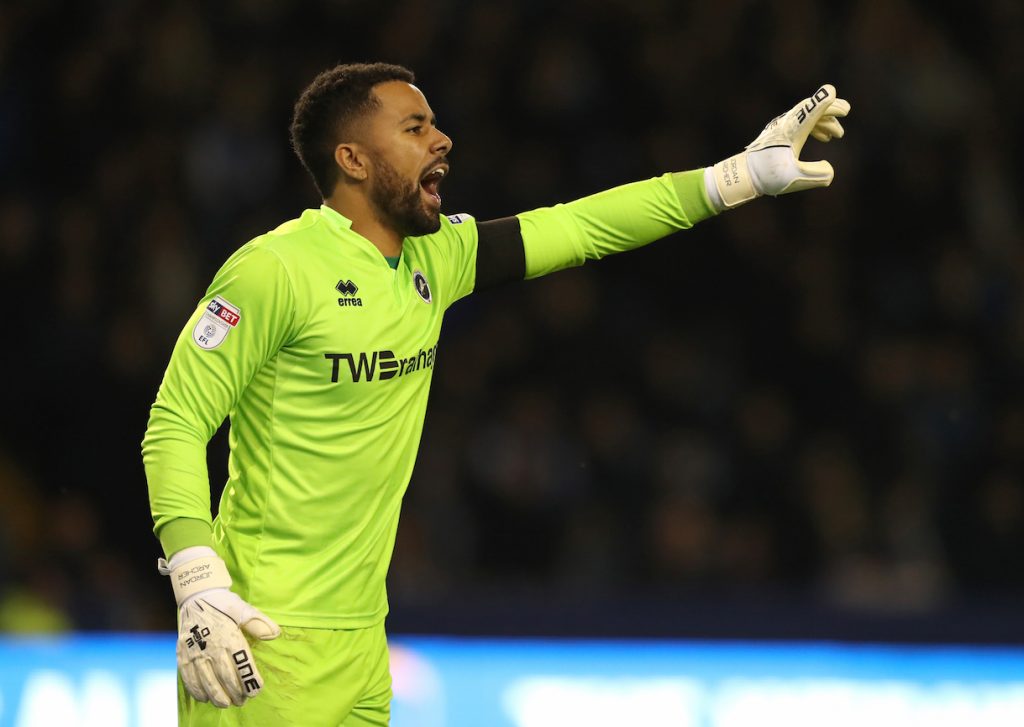 Jordan Archer has made the third most saves in the Championship this season – but insists he is not interested in personal records.

The Millwall goalkeeper has made 63 saves in the current campaign, a figure that is only bettered by Ipswich’s Bartosz Bialkowski (77) and Barnsley’s Adam Davies (64).

Archer has been in goal for seven of the Lions’ eight clean sheets – although a viral infection saw him miss Saturday’s 0-0 draw at Aston Villa.

Asked about his high-ranking save total, the former Tottenham youngster said: “I was aware of a similar stat, but I don’t look too much at them.

“Personal statistics and clean sheets doesn’t bother me too much – that’s for the statisticians to do their bit. I just focus on the three points, if a clean sheet comes with it then that is very pleasing.

“I’ve got a great back four in front of me and I’m just happy to do my part.

“I wasn’t aware it was eight clean sheets so far – the boys have done well and it could’ve been more. It shows we can hold our own.”

Archer had been an ever-present in the Championship until sickness ruled him out at Villa Park. Although David

Martin kept  a clean sheet, it would be a surprise if the 24-year-old did not return for Saturday’s visit of Middlesbrough.

“Those things are not up to me – it is the gaffer’s choice,” said Archer, who has broken into the Scotland senior squad since the Lions won promotion.

“I think I’ve started the season strong – like the other boys – so we’ll see what happens.

“I’ll be fit for Saturday. I was knocked for six [with the infection] and struggled all through last week.

“I set myself a goal at the start of the season to play every single game. Last season, I suffered a quad injury, so I was hoping not to get a recurence of that. Unfortunately you can’t control an illness. I don’t aim to miss another game.”

Millwall are heading towards the Christmas period in good shape. An unlucky 1-0 defeat at Fulham is their only loss since November 4.

The Lions’ big strength has been their defence. Archer said: “A lot of people wrote us off this season but we have only had one or two matches where I have felt we have been outplayed – Wolves away being one of them. In all the others we have held our own and if we’d been a bit more clinical we’d have taken three points.

“You looked at the teams in the league before we started and there  are some top, top clubs who have either come down from the

Premier League or are pretty much a Premier League club in terms of their set-up. We didn’t know how well we would start but 21 games in and I’d say we are a comfortable Championship team.”

As 2017 draws to a close, Archer can reflect on a good year.

His first-half save from Billy Clarke in the League One play-off final in May denied Bradford – on top at the time – a chance to take the lead. Steve Morison’s winner grabbed the headlines but the Lions stopper also played his part.

His recent errors in the 2-2 draw at Sunderland in mid-November drew attention but his consistency levels have been high.

“As a goalkeeper you always get microscoped if you make mistakes – like at Sunderland,” said Archer. “You get a lot of criticism on social media but I just turn a blind eye to it.

“I know every time I make a mistake I always put it right.

“I had a bit of stick last season and after the Ipswich match but I do not let it faze me. Every time I cross that white line I’m confident in my ability.”