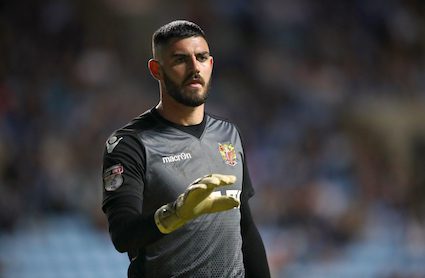 Goalkeeper Tom King, even at the age of 23, is close enough to tasting success at his own club, Millwall.

What he lacks in experience of ‘men’s football’ he makes up for with confidence.

That’s not surprising, as he has suffered only six defeats in his 19 Millwall appearances. But some of the reflexes are missing – and he readily admits it.

That’s why he agreed a loan move to AFC Wimbledon last week, where he hopes to be the first choice and learn the habits which might enable him to knock Jordan Archer off his perch.

“I have found that with Ashley Bayes. He is very similar to Lee – their techniques, their intensity and their characters are similar. They like goalkeepers who play the same style – the whole set-up is a lot more alike than I expected.”

The two managers are friends, having met at Millwall when Willie Donachie, the Lions’ manager from 2006-07, brought Harris back to The Den for his second stint at the club.

“I know that communication between the managers when you are on loan is important,” said King. “It would be nice to have them be in constant contact, so that one can say if he sees it one way and the other can say if he sees it another. That is an integral part of a loan, which is an important part of the process of becoming a keeper.

“Some of the top stoppers have gone out on loans to learn their trades – Asmir Begovic, Ben Foster and Joe Hart. So the blueprint is there. Few of us go straight into the team. Instead, we go down the divisions – and hopefully I can follow in the footsteps of some of those guys.

“There was a dilemma at the end of last season. I came back to Millwall in good shape and given the manager something to think about.

“But he has told me he thought I would benefit more from the experience of being out than from biding my time and waiting for a chance. I appreciated his honesty.”

King has gone from a loan with Welling and Braintree in the National League in 2015-16, to Stevenage in League Two in 2017-18, and now AFC Wimbledon in League One.

He also spent a lot of 2016-17 on the bench at Millwall in League One – the campaign where he made 17 of his 19 of his Lions appearances.

“Hopefully, everything is going in the right direction,” he said. “It was never intended to be one step at a time, though – it was about finding the right place to be. The manager said it was not about the division, but about developing my attributes. I feel like I am ready for League One now – my performances at Stevenage warranted the opportunity.

“I was back-up for two years including Millwall’s promotion year and when I came in, I did what was required.

“Now I am ready to play games and getting closer every year to that spot which I have so coveted.

“That target will be closer when I get closer to 100 games.”

King joined Millwall four years go, after being released by Crystal Palace. One of the people who helped the stopper get where he is now is former Millwall goalkeeping coach Kevin Pressman, who left The Den last month.

“He was great for me,” said King. “He took me from the ultimate disappointment, of being released, to a guy that believed he could be the best keeper every time he stepped on the pitch.

“At the time, I needed an arm around the shoulder – someone to tell me I would be OK if I worked hard.

“His mentality helped no end – and he improved me technically as well. He played so many times in the Premier League with Sheffield Wednesday and I was learning every day working with him, drawing from his experience.

“When you are a kid, it is easy to get caught in the headlights of professional football. The main lesson for me was not to take it for granted. I was not pushing to the maximum of my ability.

“It is not about turning up, catching a few balls. Growing up, you have to develop new mentors. The people I associate with now have to take the credit for that.

“It should be about going in every day, trying to be better than you were the day before. You do really need to work.”

King is charismatic and confident in conversation and is not backward in agreeing he would like to be a captain one day.

“There is no beating about the bush about it,” he said.

“I am not afraid to voice my opinion. That is a vital characteristic in a leader. Some lead with how they play, others with how they speak. I talk in the dressing room. The Dons’ goalkeeping coach Bayeso said that was an important part of bringing me in. The armband would be nice one day but it is not my focus. I would not shy away from the opportunity. If the dressing room is down, I am the one dragging everyone up.

“At Stevenage, though, I learned when to speak up and when to shut up. One manager [Darren Sarll] encouraged me to voice my opinion; for the second [Noureddine Maamria] I learned that maybe I had said too much.

“I am at about 60 games now and hopefully as I get closer to 100, I will be able to weed out the technical and concentration issues.”