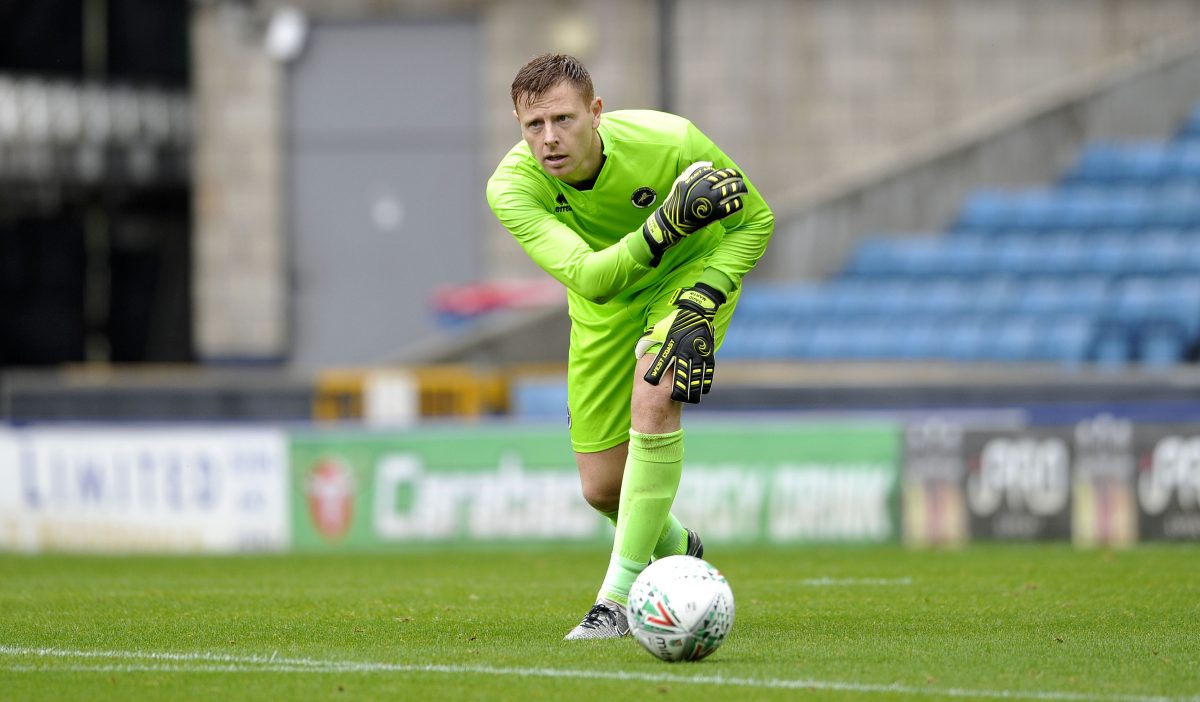 David Martin has played just under 400 games in his professional career – so playing back-up is a new experience.

The experienced goalkeeper signed for Millwall just after the summer transfer window closed on a short-term deal until January.

Martin opted to leave Milton Keynes, where he had played 334 matches, at the end of last season.

And despite training with Charlton Athletic for much of pre-season, it was to be another South London club who acquired his services.

Martin has been on the bench for the Lions with Jordan Archer – called up by Scotland for the last two international breaks – retaining the number one slot.

“It’s been difficult because I’m clucking to get playing,” said the shotstopper. “It’s my personality – I’m itching to get involved and show what I can do.

“But there is the goalkeepers’ union. I’ve got to support Jordan every way I can. If that is in training, by pushing him, then great. I’d like to think so far I have made a difference. Jordan has been pretty good.

“I’ve got to wait for my chance and take it.

“The last time I was in this situation was when I was at Liverpool. I was third choice and on the bench for a number of games. I had Pepe Reina in front of me – which was almost a mountain to go up.

“It is a change. It is in training sessions that you realise the differences. When you are playing and might be mentally tired in training it is okay – because you can make up for it in games.

‘But when you are out of the side you can’t have an off-day in training. It is like having 90 minutes every day in training to impress. If there is something you think ‘I could have done a bit better’, it is a bigger deal when you are not playing.”

When asked about his time at Charlton, Martin takes his time before providing a response.

He was part of their pre-season training camp in Ireland but did not play any of their friendlies.

The Addicks signed Ben Amos on a season-long loan from Bolton Wanderers just before their League One campaign started.

“It was a strange situation – I probably don’t want to go into details,” said Martin. “It was what it was, I got some great training there with Lee Turner, the goalkeeping coach. It’s probably the best pre-season I’ve had. It was pretty tough, and I’ve done quite a few.

“It put me in a great position to go wherever I needed to go.

“It [joining Charlton] wasn’t meant to be, for one reason or another. It went on for a long time.

“I’m here now and looking back, I’m in a much better position with the potential of this club. I’m just pleased it gave me a foundation with the training. I was ready when I came to Millwall.

“I left Milton Keynes because I needed a new challenge. At the start of last season I kind of knew it was my last year there. I still went into it giving everything I’ve got.

‘It was taking that chance, when you don’t have anything concrete.

“There were times I thought I was going somewhere and it fell though. It was like a jigsaw, Millwall came up really quite late doors.

“Once you have turned down quite a few clubs I knew I couldn’t just settle for anything. It had to be the right club. I went past the point where I had to hold my nerve. Thankfully something came up.”

January will be the next decision time for Martin. If he is staying at Millwall, a new deal is likely to have been sorted by then.

“It is a chance to review things – for both of us,” he said. “It gives the gaffer a look at me.

“I’d like to think I’m exactly the same whether I’m in the team or not. I try to make the club better.

“We’ll see if the club want to extend it or vice-versa. I’ve got a really good feel about the place.”

Martin picks out a former Crystal Palace goalkeeper when asked about who is the best he has worked with in his career.

“Before I went to Liverpool I trained with Everton,” he explained. “I trained with Nigel Martyn and thought ‘wow’. He was pretty special.

“I could sit here and bore you for hours with goalkeeping. He made the hard things look easy. A lot make the easy things look hard.

“Seeing it first-hand I’ve tried to take a philosophy in my career of trying to help the team – if I can save a corner or start a counter-attack than I will.”