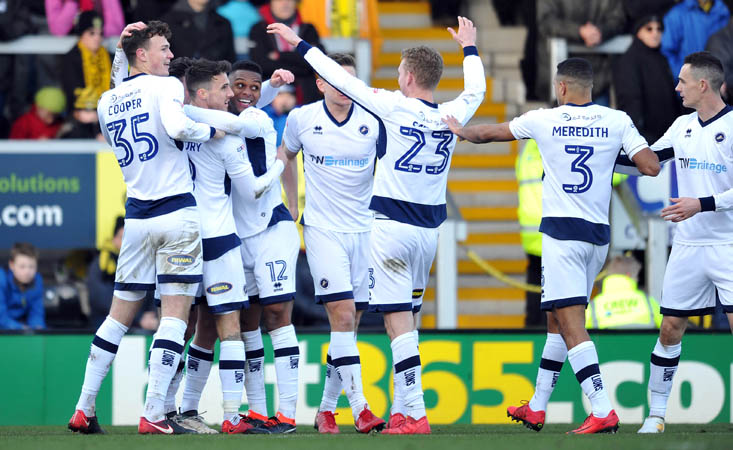 By Harry Arckless at the Pirelli Stadium

Seven league games unbeaten, four consecutive away wins and 12th in the Championship table. Being smug is a hard thing to avoid if you’re a Lions fan right now.

It was not, by their own standards, a pretty performance. More one of discipline and organisation.

Harris admitted that it was their worst performance on the road this season but after the reverse fixture – a contentious 1-0 defeat at The Den – he was clearly here for blood. His midweek comments claiming Burton “absolutely robbed us” did little to calm the tension at the Pirelli Stadium either. A soft red card for Jed Wallace in SE16 and the Brewers scoring with just their second shot of the match meant he had a justifiable gripe.

Burton went into Saturday’s match without a win at home since September 16 and had suffered 11 home defeats in 13 outings.

But they performed anything like a team scrapping for their lives at the bottom of the table. 19-year-old Manchester City loanee Jacob Davenport, highly-regarded by Pep Guardiola himself, shone in midfield for the Brewers. Couple that with veteran former Charlton Athletic striker Darren Bent leading the line and on paper they look like an established Championship outfit.

Putting the ball in the back of the net has been a big problem – and their lack of confidence in front of goal showed again at the weekend.

Bent had two glorious opportunities which could be argued would have been taken several years ago when Aston Villa paid £24 million for him. The first came from a mistake by Jake Cooper but the former Reading man recovered brilliantly just as the trigger was about to be pulled. The second fell to the frontman’s weaker foot and was blazed wide.

Millwall’s two strikers are not strikers who have been movers in transfer windows for head-turning amounts. Instead they are gritty, hard-working and intelligent. With the little service they had, they still made it difficult for the Burton defence. Steve Morison’s ongoing battle with Kyle McFadzean was always intriguing. The advantages of a stadium holding just 6,700 is that the verbal exchanges were easily heard.

The experienced Tim Cahill, a dream signing for fans when it was announced two months ago, carried on where Morison and Gregory left off. Hassling and getting under his opponents’ skin. His booking was deserved, but it slowed the game right down when Burton were threatening to get up the pitch.

The last time the sides met at this venue in 2015, Burton ran out 2-1 victors to move two points clear at the top of League One. Saturday’s result saw Millwall go 19 points above the Brewers. Even more remarkable is that the play-offs are just six points away.

With the form they are in, why not harbour that ambition? Harris made it clear that his players fear no-one in this division – and why should they?

Credit has to go to the January transfer business. It shows how powerful Wolves are that a player like Ben Marshall cannot get in the team but can shine in this side.

His goal typified the performance, scrappy but effective. Wallace with a rare forage forward down the left-hand side, cut back onto his right foot and whipped a wicked cross into the box. Marshall rose above Damien McRory, the ball ending up in the left of the net.

“Sometimes in football you get goals like that – you have to take them when you get along,” said Harris. The bit of luck was deserved overall. Burton threatened but rarely scared the assured Millwall defence and just six shots with zero on target say it all.

Sunderland – another relegation contender – are up next at the Den and the way things are going, the Millwall train should keep on rolling.