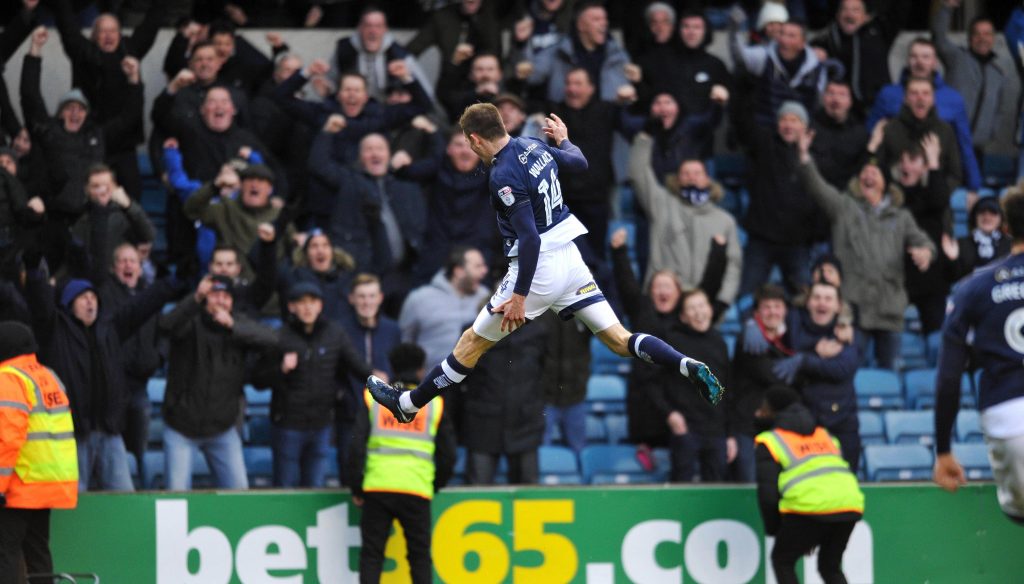 Jed Wallace doesn’t think Millwall have got the credit they deserve for their achievements in the past 12 months, writes Conor O’Sullivan.

The winger scored the opening goal in the Lions’ 2-1 victory at home to high-spending Middlesbrough.

“We haven’t got enough credit for what we’ve achieved in the last few seasons particularly in terms of the promotion and the FA Cup run last season,” said Wallace. “This is a very special group, there’s no egos in the dressing group which is annoying in terms of the Christmas Party because the players only want to spent £20 for a night out in London!

“We’re geared not to have the ball which suits us when the top sides come to the Den. The crowd is bigger when teams like Middlesbrough come here and there’s a great atmosphere which raises our performance levels. You see teams who have spent a lot of money and there’s an emphasis on keeping the ball but it plays to our strengths because we can keep our shape and then it them on the counter which we executed very well for both our goals against Middlesbrough. We did the same at Villa Park and we should have won that game as well but didn’t take our opportunities on the day.

“It’s a special atmosphere at the Den. On paper, we should be lower in the table but the unity in this squad and throughout the entire club is transmitting onto the pitch. We’ve we’ve earned the right to be in this division and we just need to replicate our home form to move further up the table.

“We’re in a false position in my opinion and just need to improve our away form. We should be higher in the table we’ve missed so many good opportunities in a lot of games that we’ve lost and there’s been some controversial decisions that have gone against us. We should be 7 or 8 points better off than we are and we’ve had to show some real grit to earn seven points from our last three very difficult fixtures.

“We can’t look up the table, we can only look the next game because it’s so difficult in this division, there’s very little between all the sides. We’re competing against teams with £45 million transfer budgets who we can’t compete with financially so we must work extremely hard on the training ground and in every game to match these teams. We‘re not under any illusions that we’re the best team in the division at passing the ball but we can mix it with any team like we had to do in the first half against Middlesbrough we’re happy to do that and today we came out on top.

“We look forward to playing teams with big budgets because this is the level we want to play at and it shows how far we’ve come as a team when last year we were struggling to beat teams in League One like Walsall and Chesterfield at home. This season, we’ve turned over teams with Premier League quality in their squads so it’s a huge source of pride for the team.”

Wallace has thrived this season since completing a permanent move to SE16 from Wolves with four goals and two assists.

He said: “You’re only as good at the opportunities as you get and I didn’t get enough chances at Wolves where I can’t remember starting more than two games in a row so it was very difficult to build any kind of momentum. They brought in a player like Helder Costa for £15 million and I end up cleaning his boots while he’s helping them to win the league!

“I’m a very honest player and play front foot football which involves working hard and getting in behind players which I can do a lot of here at Millwall. It’s an old school club, a real throwback with the old stadium and magnificent atmosphere. I’m really enjoying being at this club and thankfully things are going really well for me at the moment.

“Steve Morison was outstanding against Middlesbrough. We’ve missed him so much when he’s not been involved throughout this season and the lack of goals won’t bother him. The goal drought won’t bother Steve, he’s one of the strongest characters I’ve met in football and there’s a lot more to his game than scoring goals, he contributes all over the pitch with his link up play and creating chances for teammates. He’s our leader out there.

“Lee Gregory is a proven goalscorer at any level and he is a quality player at this level because he always creates chances for himself. I’ve played with £5 million players who don’t have a shot for a month.

“It’s very hard to stop a game that turns into a brawl and in the first half they put in a few stong tackles which got the crowd up for it and it played into our hands. We turned the game into a battle and put ourselves in a very strong position after scoring our goals before half-time. This is a very down to earth dressing room and we’re very good at playing to our strengths.

“We’re a tight group and we have great personalities who have come into the squad like Tom Elliott and Ryan Tunnicliffe who have never the let the team down when they’ve been called upon and with the crowd on our side at home we are a team to be reckoned with. We have a tough trip to Derby next weekend but we’ll be ready for it.”