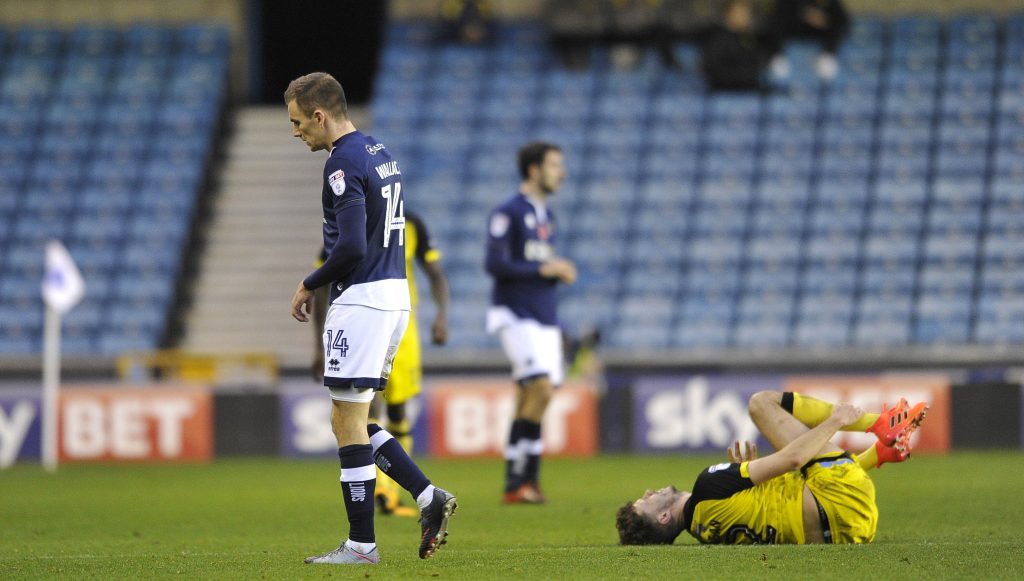 Millwall have lodged an appeal to overturn Jed Wallace’s red card against Burton Albion – with boss Neil Harris describing the dismissal as “unacceptable”.

Referee Tony Harrington sent off the Lions winger for a late tackle on Tom Flanagan which prevented the visitors from counter-attacking just before the hour mark.

Wallace is the fourth red card that Millwall have received this season in the Championship.

They also appealed Lee Gregory’s sending off at Queens Park Rangers but an FA disciplinary panel upheld the decision.

“We are awaiting written confirmation of what he has put in his report but we were told it was given for dangerous play,” explained Harris. “He has said it is a high tackle.

“It is late, it’s a foul and a yellow card. Jed definitely caught the boy. It’s cynical – not dangerous.

“My gripe at the time is that the referee is so quick to get the red card out of his pocket. He didn’t take a minute to compose himself or speak to his colleagues. Everyone in the crowd of 12,000 thought it was a yellow.

“We’ve got eight players behind the ball and the foul is committed in their half. I think the linesman, fourth official and the assessor were amazed when it was a red card.

“It is another major call that a referee has got wrong against us. If it is a 50-50 call it has not gone our way. It’s not acceptable.

“There’s no telling if we’d have won the game or not with 11 v 11. But we were on the front foot, we had the ball and never looked in danger of conceding a goal. The worse case scenario at that point was that the game ends 0-0.

“I was making substitutions to try and impact the match and we still finished strongly despite it being 10 against 11.

“Does the referee come with a pre-conceived idea, because Mezza [James Meredith] gets booked in the first half for stopping an opponent playing a one-two around him but then he lets one go in the second half when the same thing happened to Conor McLaughlin.

“Burton came to frustrate us and get players behind the ball. They took forever on goal-kicks, from 10 minutes in. I spoke to the fourth official early on, saying the referee needed to let it flow, but he did nothing about it until he booked Stephen Bywater for time-wasting late on.

“The frustration was there from my players and the crowd that we couldn’t build momentum. The play was consistently broken up, Burton did well with it. They picked a big side to combat us. We didn’t use the ball wisely enough, that’s for sure.”