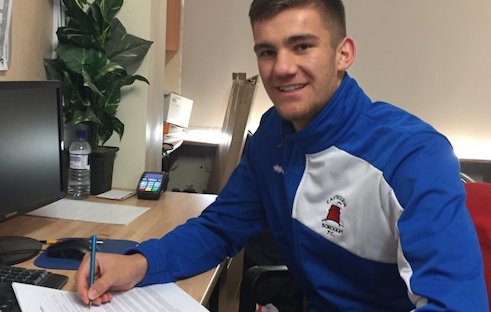 Millwall have agreed a deal for Eastbourne Borough defender Harry Ransom – with the teenager joining them in the summer.

The 19-year-old can train and play U23 matches for the Lions but will still feature for the National League South side.

“Harry remains an Eastbourne player at the moment and concentrates on them amassing as many points as they can until the end of the season.

“He can train with us and play in U23 games, if they are at the right time. But his main focus is still with Eastbourne Borough until the end of the season.”

But Harris says that it was the club’s recruitment department which identified Ransom as a player of interest.

“Non-league is big for us – especially young players playing regularly at a good level,” said the Millwall boss.

“Having played for Mark and knowing his wealth of knowledge – his eye for a player is second to none – I spoke to him about young Harry.

“For us it is about giving young players an opportunity to show their potential. They are playing mens’ football at a young age and you want to give them a chance in the professional game.

“Harry Smith was the last one we took [from Folkestone Invicta]. He did very well for us in a short period – he is now playing week in and week out for Macclesfield.

“He has gone from Folkestone Invicta to League Two and we were a big part of his development.

“We want players to come through from our academy or from non-league and into our first team. If they don’t but still have Football League careers then it is still an achievement.”