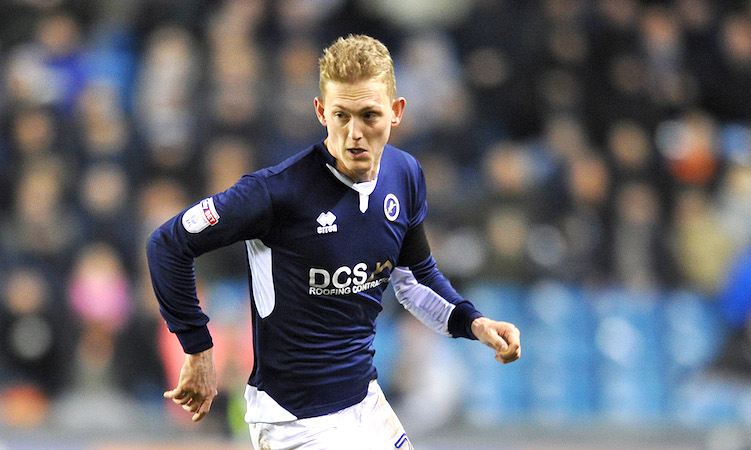 George Saville has revealed how he played through the pain with a foot injury this season – with the Millwall midfielder on course to start every Championship match in the current campaign.

The summer signing from Wolves has been an ever-present in midfield apart from the final seven minutes of  the New Year’s Day defeat at Norwich City.

The only Lion in with a shout of playing every minute in the league is Shaun Hutchinson.

But Saville’s starting stats are a nod to his own desire to not let any knocks sideline him.

“I went through a period where I had quite a sore foot – that lasted quite a while,” he told the South London Press. “You just get through it. In this day and age, with the amount of games in the Championship, you are never going to be going into games like you feel on the first day of the season. It’s inevitable there is going to be a bit of pain here and there.

“It is about getting your mentality right and getting through it.

“You can’t just assume you are going to start every game but you set yourself a target of playing as many as you can. I’ve played every game so far, touch wood. I want to maintain that form and keep my place.

“Starting every Championship game would be a nice stat, but I also want to play well. Not just roll out another game.”

Saville’s form in a Millwall shirt has seen him win international recognition with Northern Ireland. He played for Michael O’Neill’s side in their World Cup play-off ties and has four caps.

When you add in 32 club outings this season – and seven goals before the new year – his Den move has paid off. Last weekend he clocked up 50 appearances for the Lions.

“I’m really happy with my season so far,” he said. “But over the

Christmas period and a few games after that I felt a little fatigued, my performances dropped ever so slightly. They have picked up again now.

“In the Championship you are not going to have 10 out of 10 games every week. You have to pick yourself back up, which I have done.

“There is always room for improvement and different goals to set.

“I’ll keep working on things and see where it takes us.”

Saville has gone nine matches without a goal but is already in his most productive scoring season as a professional.

“It is a slightly dry patch. I feel I’m due a goal because I set such high standards. It would be great to get some more goals but the priority is to get points on the board and climb up that league.”

Saville played his own part in Ben Marshall’s recent loan move to SE16. The Wolves winger sought his thoughts before joining on loan at the end of January.

“I’m expecting my commission,” joked Saville. “He had a couple of options and I only had positive things to say about the club. The club did well to sign him.

“It’s great to have someone of his quality down here at The Den. Sometimes we have maybe lacked that bit of spark. You’ve seen this season we have played well and not won games. He’s a great lad to have in the camp.

“The club have recruited really well this season. They’ve had two good years making the play-offs and this is the next step. They made a couple of recruits they needed to do.

“They’ve done well in January. We’re probably in the strongest position we have been in all season.”

Millwall are five unbeaten in the Championship heading to Birmingham tomorrow. But that sequence could have been over if referee Keith Stroud had not controversially halted play just before Sol Bamba hit the net in last Friday’s

1-1 draw against Cardiff – initially not calling a halt despite Joe Bennett’s head injury.

“We probably got away with one,” said Saville. “But we have had decisions go against us that have been awful.

“We had one at Cardiff’s place. Gregs [Lee Gregory] was through and got ripped down – that’s a red card and straight at the start of the first half.

“Decisions come and go. They say over a course of the season they even themselves out. It was good for us. When you are in that position you feel hard done by. It’s not right.”