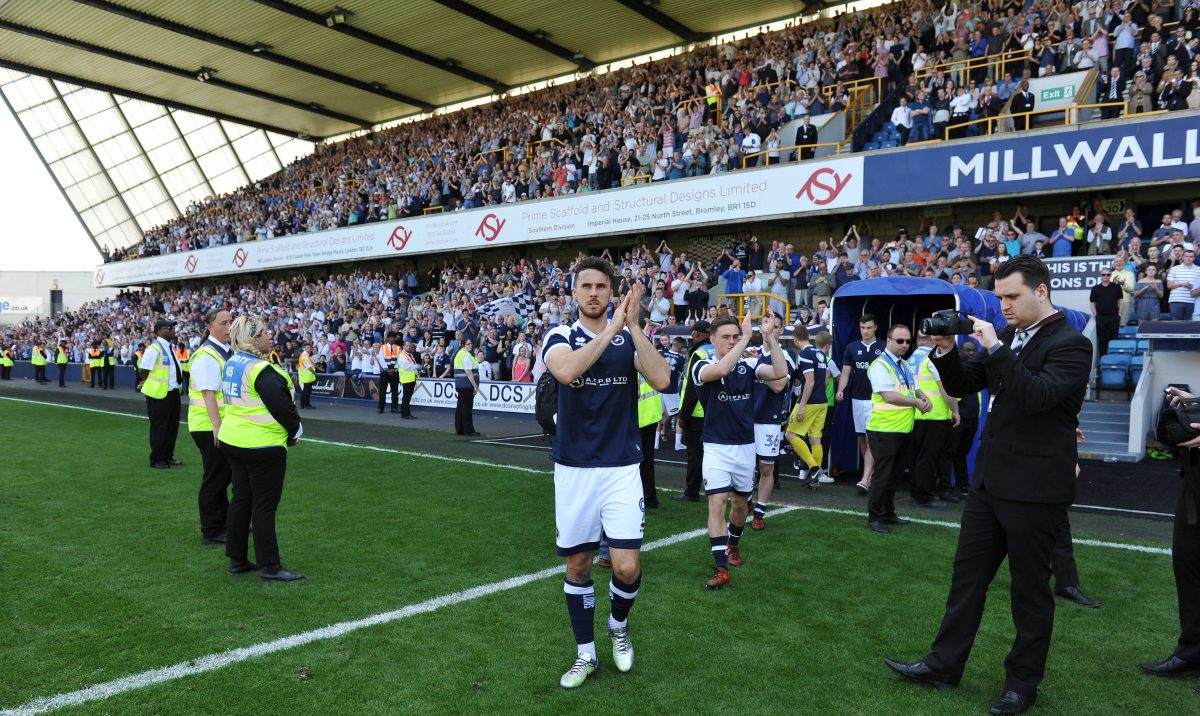 Millwall chief executive Steve Kavanagh has revealed that losing any land around The Den would be hugely damaging to meeting Premier League requirements.

The Lions produced a 17-game unbeaten run this year which saw them move into the Championship top-six with only three matches remaining.

And Kavanagh says talks with the Premier League – outlining the stadium requirements for top-flight football – only make it more vital that they do not lose any areas surrounding their home.

Kavanagh has made it clear that costs would run into the millions if Millwall were to reach the top flight in terms of a checklist from the Premier League.

And there were discussions when the prospect of Neil Harris securing back-to-back play-off promotions was a possibility.

“When you look at The Den and where it is, we talk about the regeneration and those conversations taking place – it is quite clear that substantive development would have to happen to this ground.

“We have to look at that and set it out, to make sure in discussions with Lewisham council about what would be needed – it’s massive.

“I spoke to Middlesbrough. They had been out of the Premier League for four years and they had to do over £6million in changing requirements over that period. The Den, as it stands, would not be fit for the Premier League.

“Because of the growth in overseas TV rights the outside broadcasting and the area needed for those OB trucks is huge. I’ve had conversations with architects as part of this process – about what the needs of the ground and club are to ensure it is protected going forward. And every single one of the architects has said to me ‘you haven’t got enough land here, you can’t give up anything – you need more to meet those requirements’.

“That was quite a chilling proposition, when you’re sitting there and thinking we could have two months to get this into shape. It would have been extremely difficult. The press gantry, for example, would need to double in size.

“We’d lose substantive seats in that stand. How do we get the capacity of the Den last season – when we were selling out the last four games? We’d lose lots of seats and would then need to look at how we created additional capacity in the ground. They’d be great challenges to have.

“In my discussions with the new mayor, we want to get it clear to him so that he understands that protecting this club isn’t about putting on a little bit of new cladding, as the property developers feel is right.

“It’s a bit bigger than that – quite a major piece of work. It doesn’t leave a lot [of land], if anything.

“It’s given us something to really think about in terms of what we need going forward for this club to function and be protected, so the ultimate goal of the Premier League can be achieved.

“The media area and mixed zone – to accommodate the overseas press – that would be a huge extension on the front of this building just to deliver those requirements.

“Never mind anything else like press gantries and what would be needed to make us sustainable.

“Is there a number? No, but it’s big though.

“You’ve got the Premier League money coming in but it is something we have got to seriously consider and make sure we it set out with clarity so that Millwall can stay at The Den, no matter what. That has to be enshrined in everything the council does going forward.”

Millwall ended up finishing their first season back in the Championship in eighth, hugely impressive considering they lacked the spending power of Middlesbrough and Derby – who they are battling with for a play-off spot.

“We know what our financial structures are,” said Kavanagh. “In League One and League Two you work under what is called salary costs management – so you do know what the other clubs are spending on player wages.

“You get those tables, it is validated data. You don’t have the names of clubs but everyone has great fun guessing them and working them out.

“Because in the Championship it is profitability – a funny word when it is actually about losses – there isn’t the same qualitative data about what people are paying in wages. You have to piece it together from other areas.

“There is never any certainty on where people really stand, but we have assessments of other teams and speak to other clubs. We believe we know roughly where people are and pound-for-point we would have won that league – Preston were second.

“We were definitely in the bottom half of the table. But also we need to remember there are teams out there that have spent huge amounts of money – look at the stars on show in the play-offs? In one game there was something like six ex-England internationals on the field of play. John Terry, Scott Carson, Stewart Downing, Jack Grealish – the stars that exist in this league are unbelievable. [Aleksandar] Mitrovic on loan at Fulham – there are rumours what they are paying for him and it is eye-watering if true.

“Are we ever going to be in the position to compete with that? No, but then also that is what the sustainability and profitability rules are about.

“Clubs have got to operate within those. We operate clearly within those. Those rules are set there. There have been meetings and some clubs want to remove those, but I stand strongly that it is what the rules are for – to try and make this league competitive. While it is competitive and we deliver what we have delivered, with other clubs doing the same, then actually it is a fantastic product as a result of that.

“The Championship is a superb league. What it can’t be is an absolute car crash financially. It is just not sensible behaviour.

“Looking forward, we can only get stronger from that position because we are doing it in a sustainable way and sensitive way. But we are putting all the players at the core and they are in it together.”

Millwall have always been moving forward under Neil Harris – who is building a hugely impressive reputation as a manager. There is no reason to think that will not be the case again in the 2018-19 campaign.

But the Championship is an unrelenting beast.

“There are no self-congratulations, slapping ourselves on the back and thinking we have made it now and sitting back on our laurels,” said Kavanagh. “We know we have got to start next season how we finished last season.

“Look at Reading. In the 2016-17 season they were in the play-offs – one penalty away from getting to the Premier League – and this season they could easily have gone down. That’s how tough this league is.

“Sunderland were the early season favourites to win it and they went down with 37 points.

“We set targets and benchmarks and making sure you get to the 50-point mark – no matter who you are – is objective one. Get to there and then see where you are.

“That will be our objective again next season. You go on that [unbeaten] run and you dare to dream, of course you do.

“We’ve achieved nothing. We’re back on zero with everyone else. It starts again, I wish it didn’t have to! I didn’t want it to end but it has to. People are just trying to be realistic about that. It’s why people are trying to add that bit of quality to the squad and keep driving forward.

“We’d love to have a similar season and go one more. But it’s not easy to do because of the quality and money being spent in this league.

“It will be doubly hard. The fans have a huge part to play in that. Our season ticket sales are up already. We want this place rocking week in and week out  – filled to the rafters. If we can do that and keep going, who knows?”