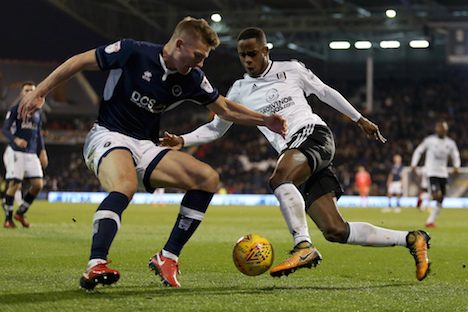 BY RICHARD CAWLEY AT CRAVEN COTTAGE

What have we learned 19 matches into the Championship season? That Millwall are not getting a whole lot of luck.

The old saying is that these things level themselves out over the course of the campaign. You’ll win matches that you should have lost. Pick up a point when you don’t deserve it.

But the Lions have stockpiled enough bad breaks that Lady Luck is going to have to start smiling upon them soon for there to be any chance of evening things up.

I’m not making excuses. Finding an easy way to justify their away form. We’ll get onto the lack of goals from Neil Harris’ attacking players in a moment.

But Saturday’s short trip to Craven Cottage should have since them take at least a point back to South London.

Neil Harris’ side did not do a whole lot wrong. If we are going on passing stats then Fulham – who would probably like an extra touch on a penalty kick – were majorly on top.

But that isn’t how football works. And it is also not how Millwall play. They were the same in League One. Other clubs might be more worried about caressing the ball towards the opposition goal – the Lions do not care if they get criticism for taking a far more direct route.

As soon as you saw the teamsheet on Saturday – Tom Elliott and Steve Morison paired in attack – you knew that the Lions thought they could win this derby in the air.

And against a Fulham side majorly lacking size, it had a fairly big amount of success in terms of the pair winning a big majority of the balls played up to them.

One gripe was that the Lions did not do better with their set-pieces – not only corners but also free-kicks which allowed them to turn the physical screw on Slavisa Jokanovic’s side, which seems to put style above every other attribute.

Elliott was so unlucky not to give Millwall a sixth-minute lead. Conor McLaughlin’s cross was guided goalwards by the former AFC Wimbledon man but struck the left post.

George Saville curled beautifully past David Button in the final quarter-hour of the contest – displaying fine technique – but the ball pinged back off the woodwork.

Two game-changing moments which went against the Lions. That is before you add in the panic they induced in the Fulham box. But that big break failed to materialise.

Saville, one of Millwall’s star men this season, picked out Morison just before his own effort but the veteran could not hit the target as he aimed to float the ball over Button.

Lee Gregory, dropped to the bench after his late miss against Hull City a week ago, turned in the box but his rising strike lacked conviction as soon as it left his boot.

The return of Jed Wallace after a three-game suspension is a major boost for Saturday’s home game against Sheffield United. Fred Onyedinma failed to take his chance on the right of midfield and looks highly likely to make way.

Millwall’s attacking players need to step up. Their season depends on it.

Saturday was another disciplined defensive display only undone by an Oliver Norwood penalty which both managers disagreed upon post-match.

Jokanovic saw it as a “clear” foul while Harris reckoned Rui Fonte went down under minimal contact from McLaughlin, who had earlier made a vital tackle on Neeskens Kebano as he raced onto a Tom Cairney pass – it was a rare moment when Fulham’s captain unpicked the Lions backline.

The biggest surprise is Morison’s barren spell, now 19 Championship matches. His influence is so big – the goals he has netted absolutely vital to Millwall being back at this level – that it is a head-scratcher over his run of blanks.

Onyedinma is yet to open his account and Aiden O’Brien is into double figures for his own barren spell. Next comes Wallace (nine) and Gregory (eight).

There has been a clamour from Millwall fans for Elliott to be handed a run in the side and only the width of the upright prevented him taking his scoring haul to five. But there was also a heavy touch inside the box which allowed Tomas Kalas an opportunity to snuff out a dangerous attack during a spell of heavy late pressure.

Going into the weekend only Sheffield United (seven) had conceded less goals than the Lions in away matches – but they have produced just five goals at the other end in 10 fixtures, only better than Burton and Birmingham.

The problem is plain to see. But the solution is still evading them. Until they can find a fix, this campaign is going to be a grind.