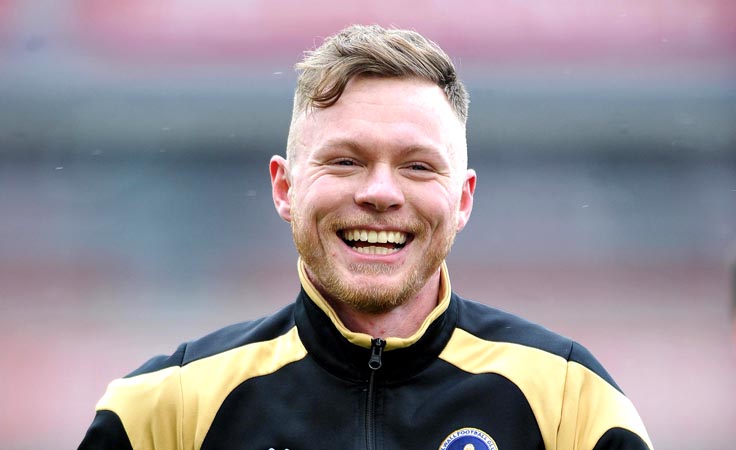 Aiden O’Brien reckons Millwall have shocked the footballing fraternity with their 12-game unbeaten run in the Championship and warned: “Don’t rule us out of the play-offs.”

The 24-year-old is back from an ankle ligament injury which he suffered in the Lions’ epic 4-3 victory at Leeds United.

O’Brien scored the opening goal at Elland Road – the first away success of the season for a Millwall side who have gone on to win their next five league games on the road and can set a new club record at Ipswich on Easter Monday.

“Other teams have got a lot of tools in their team to win matches and are expected to be in the top six but this is David against Goliath – anything is possible,” said O’Brien. “I’m not going to rule anything out and I don’t think anyone should rule Millwall out right now because we are on a roll.

“In this world you can create your own dreams if you put your minds to it and luck is on your side. We can be in that play-offs, without a doubt.

“We are more open to attention from other clubs at this level now because we have been winning lots of games that people didn’t expect us to win.

“But we are still under the radar, because of the football club we are. People are glancing over their shoulders because we don’t look like stopping this run any time soon.”

O’Brien scored in the 18th minute at Leeds but was forced off just past the hour mark – Jed Wallace’s goal two minutes into stoppage time sparking scenes of jubilation in Yorkshire.

“It is one of the best games I have been involved in in my life,” said O’Brien. “To get the first goal and kick it off was something special – especially at that place with the rivalry between the clubs.

“It was a precious moment. It is up there in terms of best moments in my career, also because it kicked off our season – we haven’t lost in the league since. That game definitely played a part in that.

“Coming off with an injury is just one of those things. It wasn’t a challenge – literally the surface was wet and soft, my ankle just rolled over as it gave way. I knew straight away there was no chance of me carrying on. I literally had to hold around my ankle to support it.

“I’d been in good form but you have to brush these things off, it is what it is. I wanted to get back fit as quickly as possible.”

O’Brien’s battle for game time has increased with the arrival of Ben Marshall shortly after he was ruled out for a number of weeks.

The on-loan Wolves winger has scored twice – including in the most recent action for the Lions as he produced a superb strike in the 2-0 victory at Barnsley.

“He is a good lad and it’s always nice to get fresh faces in,” said O’Brien. “I’m happy he’s doing well and Ben has bonded really well with the other lads. But on the business side, it is time for me to get cracking. There is only one place up for grabs on that side, we’ve all got to work hard and try and take it.

“You want to play every game but at the same time the team is doing so well and you are buzzing about that. We are getting the results – whether we have scraped them or deserved it – and that is all that matters.

“I want to be out there doing what I do best – putting the ball in the back of the net.”

O’Brien was an unused substitute at Oakwell and admits he was left frustrated to miss out on the latest international break with Republic of Ireland.

His displays earlier in the campaign saw Martin O’Neill include him in his squads. But he failed to make the cut this time around and is still waiting for a senior bow.

O’Brien said: “I heard they were calling our physio all through the week leading up to Barnsley, even on the Saturday, but they made a decision on the Sunday not to take me because I had just got back from injury.

“That is fair enough, but at the same time I watched the Ireland game [against Turkey] and he [O’Neill] did give a lot of people chances, so I was gutted about that – it could’ve been me.

“But it won’t be the last time I get called up by Ireland, hopefully. I’ve got to wait patiently and let it happen.”