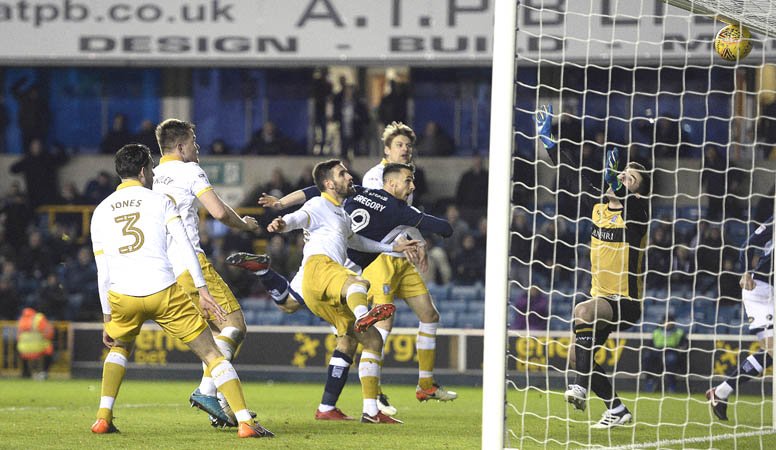 Lee Gregory has underlined the confidence flowing through the Millwall squad at the moment after admitting: “We feel unbeatable.”

The Lions came from deep in the pack to reach the League One play-offs in 2015-16 and once again are producing a strong push in the second half of the campaign.

Tuesday’s 2-1 victory over Sheffield Wednesday took them up to 11th in the Championship standings before Norwich and Leeds picked up draws the following evening, seeing the South Londoners drop back to 13th.

Millwall are nine points behind Bristol City, who occupy the sixth and final play-off spot.

“In the camp at the moment we just feel unbeatable,” said Gregory. “The aura around the club is brilliant. Everyone gets on – I’ve said it loads of times before. We’re in our own little bubble at the moment and hopefully we can keep it going.

“What are we off the play-offs at the minute? What were we a couple of weeks ago? So, you never know. If results keep going our way, we keep performing like we do – the possibilities are endless.

“You never know, do you? It’s important to keep picking up results away from home. Burton is going to be a tough game on Saturday.”

Gregory is top of the club’s scoring charts after notching his eighth goal in midweek. He has three in his last five outings.

“I’ve always backed myself to score. Just at the start of the season everything was going against me – I was playing well but keepers were pulling off saves, posts and just going wide. Now it is going my way.

“The gaffer knows how we work. Some games it doesn’t go for you, some games it does. Moro [Steve Morison] is one of our better players in our team. If he doesn’t play well and the ball is not in and around him we kind of struggle, because we don’t get the second balls and stuff. Steve is a vital player.”

Morison played his striker partner through in the first half but he was unable to hit the target.

“The defender is coming across – I’ve seen him and just hit it as hard as I can, unfortunately it has gone over the bar,” explained Gregory. “You dust yourself down and get another chance, which I did.”

The goal came from a diagonal free-kick by Ben Marshall. So many of the Millwall deadball deliveries are put to the back post for Jake Cooper or Shaun Hutchinson to head back across the face.

“Yeah, we work a lot on training with the set-pieces. Thankfully it came off and he [Cooper] didn’t go for goal, instead he put in a cross and I was there. I’m happy to score.”

Burton were the last side to beat Millwall at The Den. Boss Neil Harris has described the result as a “robbery” and once again mentioned the dismissal of Jed Wallace in that contest – the club contesting the straight red card but failing to get it overturned.

The former Wolves winger was a bundle of energy in midweek.

“Jed’s energy levels are there week in and week out,” said Gregory. “He is up and down [the pitch]. Special mention to the centre-halves and full-backs – they are solid every week too. Without them we wouldn’t be winning.

“For us it [Burton] is just another game. We know we have to go there and get three points. We don’t look at the past. Maybe the gaffer does, thinking he wants to get another one over them.”

Millwall showed resilience to come back from trailing to Joey Pelupessy’s searing opener on Tuesday.

Gregory said: “We were the better team in the first half – it was just a great goal from them. It is one where the keeper can’t save it and we’re 1-0 down at the worst time, just before half-time.

“We knew if we came out like we can in the second half that we could win. The gaffer told us to keep doing what we were doing, pick up the tempo a little bit, get the decision-making a bit better and we’ll win. In the second-half the lads did great.”