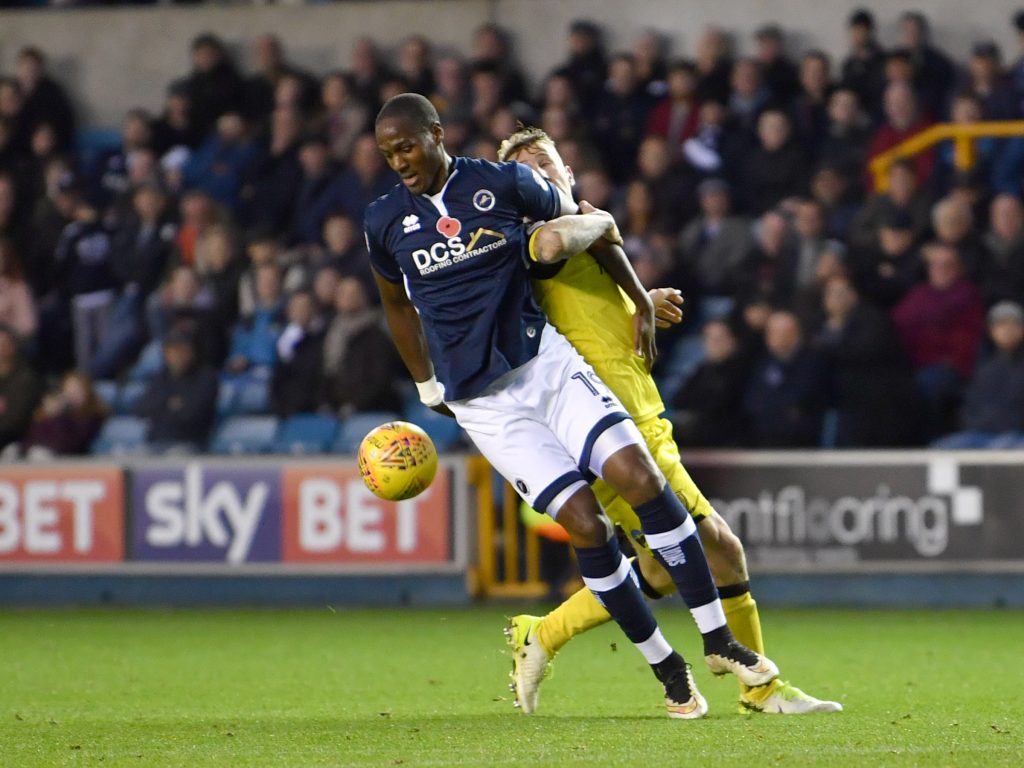 Millwall Sport
17 November 2017 Richard Cawley 0 Comments
Tom Elliott has attracted interest from Saint Kitts and Nevis over an international call-up – but does not feel the time is right to take that step.
The striker is joint top-scorer at Millwall despite not being a guaranteed starter for Neil Harris’s side following his summer switch across South London from AFC Wimbledon.
He qualifies to play for the Caribbean island through his grandparents.
“I know they have come sniffing but I’ve said I just want to focus on my club career and see what happens,” explained Elliott. “Romaine Sawyers [Brentford winger] plays for them.
“I’ve not thought about it too much because Millwall comes first. I’d have to speak to my parents and agent about it in the future.”
Elliott scored his fourth goal of the campaign at Sheffield Wednesday – his first Championship start – but was back on the bench for their next game, a 1-0 home reverse to Burton Albion.
His game time has not been aided by a couple of injuries.
Elliott said: “I’ve had two months out – a quad injury kept me out for five weeks in total and then I had an ankle injury. They have set me back a bit.
“After my quad injury Gregs [Lee Gregory] got sent off [at QPR] and there was only Moro [Steve Morison] up front, Fred
[Onyedinma] had a little knock. So my injuries have come at unlucky times.
“I did my quad injury the day before we travelled to Wolves. I pulled it in our Friday session doing some shooting.
“It’s part of football, you get used to it. You have to be a good professional, come back as strong as you can.
“I’ve got four goals but I want more. I want to do more, play more and score more goals. Four is nice but I feel I can bring more to the table.
“I want to play every game. If the gaffer picks me on Saturday I’ll put my all into it. The gaffer selects the team. I’m ready and waiting. I’m always going to tell him I’m ready. I feel I can help the team, score goals and do well at this level. I’m onto him and the coaching staff.
“If I get a run of a few games in the side then I’m going to back my ability to do well. I let him know that I’m disappointed not to play [from the start].
“If he brings me on for 10, 20 or 30 minutes then I’ll do my utmost for the team. I’m not going to sulk. We have got four really good strikers here and I know I am going to have to bide my time for periods as well as starting.
“Selfishly I want to want to play and score goals – but it’s a team game. I’m part of this team and happy to be a part of it.”
Steve Morison – a talisman for Millwall as they won promotion – has yet to open his goal account in the 2017-18 campaign.
“Moro is an experienced pro who has probably been there before,” said Elliott. “He got 19 goals last season – including the all-important one in the play-off final.
“When I have been in that situation before it is hard because us strikers are paid to score goals, some people judge you on that. But Moro and myself have a little bit of a different role  – we have to be that figure who bullies defenders and fights.
“But goals do put a smile on your face.
“It helps if you’ve got experience. I’ve just turned 27, Moro is 34 and Lee is 29. Fred is the young pup at 20. We back our ability. We wouldn’t be at this level if we couldn’t score goals.
“When you’re hot, you’re hot – it is coming off your knee and shin. When it is not going for you have got to keep working hard and it will come.”
Elliott has quickly been accepted by Millwall fans.
“Everyone has welcomed me to the club,” he said. “I’m literally just being me and playing how I play. They seem to like that. I’m only going to do more of it as I get more experienced in this league and the team.”
Only four teams have scored less than the Lions this season but equally only the top-six have managed to concede fewer times.
Harris has called for a more ruthless touch offensively.
Elliott said: “We should have won 4-0 at Nottingham Forest on the opening day and ended up losing 1-0 – crazy.
“He wants the strikers to score more goals and get behind each other – which is what we do. No-one is gunning for anyone, there is no hate. We’re working together. That applies to the whole team.
“If two of us are running down the keeper I’m sure whoever has the ball will pass to the other for a tap-in.”