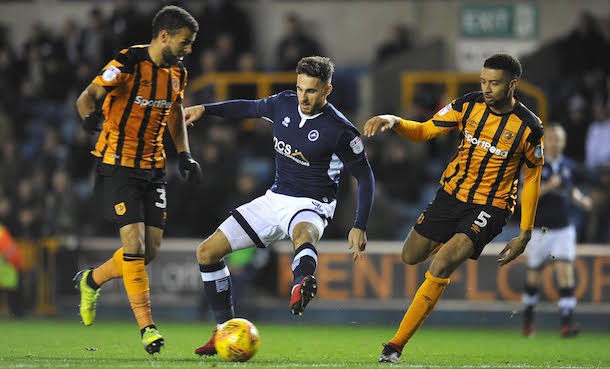 Neil Harris is not worried about Millwall striker Lee Gregory’s goal drought as the Lions drew a blank in their 0-0 draw at home to Hull City, writes Conor O’Sullivan.

The 29-year-old has not scored since the end of September, when he netted a penalty in Millwall’s 3-1 home defeat to Barnsley. Gregory has two goals this season and has not hit the back of the net in his last seven games.

Harris has tweaked his forward pairing between Tom Elliott and Steve Morison to partner Gregory in an attempt to increase the Lions’ 19 league goals in 18 games.

“Unfortunately at the moment, Lee (Gregory) is just looking for that elusive goal to get him going and if you look at those chances we deserved to win the game against Hull,” said Harris.

“Lee will be disappointed and we’ll have to pick him up again, but as a fellow striker I can say it’s only a disaster when you’re not getting chances.

“When you are getting opportunities you know the next goal is coming, it’s just about that bit of luck, either a penalty, tap-in, one to go in by any means just to end that drought and go on a run. Lee knows he’s getting the chances and it would only be a problem for me if he wasn’t getting in those positions.

“He was denied a goal by a great save against Sunderland, he had three good chances tonight and did the right thing for all those attempts – apart from hit the targe. I’m confident he will score soon.

“Everyone including Steve wants to play every game. I would play if I could. I was very pleased with the Sunderland performance at the weekend, particularly the first 70 or 75 minutes, and I wanted to give Shane (Ferguson) and Tom (Elliott) another opportunity after their good performances at the weekend.”

Jordan Archer produced a clean sheet and a solid performance in net following his two errors that gifted Sunderland two goals in the 2-2 draw at the weekend.

Harris said: “Jordan Archer was outstanding. He showed great character to come back from the weekend and he’s a young goalkeeper, only 24 years of age, and most goalkeepers mature in their early 30s.

“He made two mistakes against Sunderland that cost us goals but he came in Monday morning bright and bubbly around the team. He offered a commanding presence tonight even though he didn’t have much to do for long periods. But his response to the weekend was very impressive and Jordan showed great strength of character.”

Millwall missed a host of good opportunities during an open contest against the Humberside club and remain 18th in the Championship table on 19 points. The Lions face Fulham away on Saturday in a derby.

“The next half hour they controlled possession well and missed two good chances off the counterattack when we didn’t quite get out defensive shape quite right but in open play we defended our box very well. Hull are very good at getting from box to box and getting bodies behind the ball and keeping the ball without really looking threatening.

“We were excellent in the second half particularly after Steve came on, who changed the swing of the game with his skill, guile, link-up play, experience and organisation was outstanding. Their goalkeeper has made two excellent saves, one from Shaun Hutchinson’s header and the other from Shane Ferguson’s low drive late on.

“Ryan Tunnicliffe and Fred Onyedinma should have scored and Lee Gregory had a great chance in stoppage time.

“I thought there was a goal on the game which is why I put on Kris (Twardek) near the end because he’s scored a few late goals for our under-23s this season and Hull have conceded a lot of late goals this season. I knew there was going to be another late chance for us but I didn’t know where it was going to come from and obviously Lee had a chance to win it in the 94th minute.

“It’s another game where we’ve created a host of chances and not quite had the end product and even though I’m so pleased with so many aspects of our performance but ultimately you want to pick up points when you’re on top in games.

“Let’s not forget that’s a Hull team that have £33million worth of talent that didn’t even travel with their squad tonight. You just look at the back of the programme to see the talent they have in their squad and they’ve scored 30 league goals this season so we’ve done very well to keep a clean sheet.”