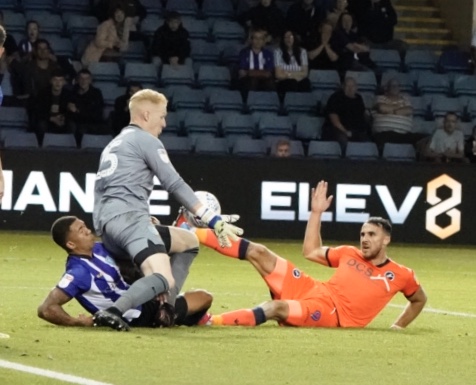 Millwall fell to their first defeat off the 2018-19 campaign after losing 2-1 at Sheffield Wednesday.

A Barry Bannan screamer put the Owls ahead before Tom Lees doubled their advantage a minute into the second-half.

Ryan Tunnicliffe pulled a goal back for the Lions, but it was too little, too late.

Wednesday started the brighter and had an early chance that Steve Fletcher wasted – heading straight at Jordan Archer from eight yards after neat play from former Crystal Palace midfielder Bannan and Marco Matias down the right.

The Owls continued to threaten, winning a series of early corners and their pressure finally paid off on 16 minutes as Bannan volleyed home a stunning effort into the top corner from 20-yards after Millwall could only half-clear.

That still didn’t wake the Lions up and they could have fallen further behind. Joey Pelupessy got hold of an effort from long-range, but it swerved just over the bar.

Neil Harris’ men finally gained a foothold in the contest and started to create some openings. Lee Gregory had the first, but overhit his cross when Millwall had a six-on-three attacking break in their favour – with Steve Morison and Aiden O’Brien waiting unmarked in the box.

It took the visitors 37 minutes to muster up their first attempt on the Wednesday goal. Jed Wallace broke away but could only roll his tame effort past the far post after hesitating.

The winless Owls should have gone into the break with a two-goal lead, but Jordan Thorniley somehow headed wide from close-range, when it looked easier to find the back of the net.

Wednesday didn’t have to wait long for that second goal though, as just a minute into the second-half they went 2-0 ahead. Bannan sent over a dangerous cross that Millwall didn’t deal with and Lees was there to convert at the near-post.

Millwall were much better in the second half and after Jiri Skalak and Tom Elliott were introduced they got themselves back into the match. Gregory found space and beat the Wednesday defence to the ball before crossing for Ryan Tunnicliffe to coolly tuck home at the back post.

Despite a strong end to the game, with the home side somehow surviving a goalmouth scramble, they held on for their first league win of the season and ended the Lions’ unbeaten start.