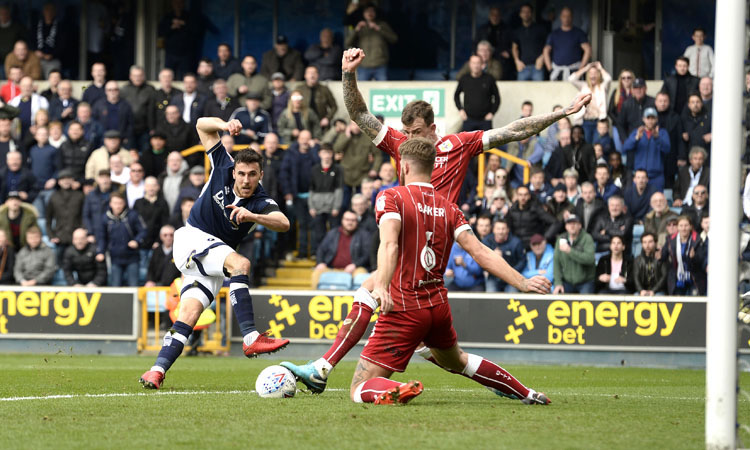 Millwall Sport
10 April 20189 April 2018 Richard Cawley 0 Comments
Millwall 2
Wallace 11 Morison 52
Bristol City 0
By Richard Cawley at The Den
The dictionary definition of relentless is ‘unceasingly intense’ and that perfectly sums up Millwall’s 2018 form which has seen them come storming through the Championship pack to make reaching the play-offs a realistic outcome.
The Lions are just a point behind Middlesbrough and lie seventh in the standings.
They look like a side who will not be denied a third play-off campaign in a row with some of their competitors for a top-six berth buckling under the pressure.
Millwall have gone 15 matches unbeaten in the league – winning 10 of those – and banking 35 points from a possible 45.
That’s why there is bound to be heartbreak if the South Londoners do not manage to extend their campaign. For all the talk of a lack of pressure on Neil Harris’ side – absolutely true when you consider they have spent a fraction compared with the other clubs going for promotion to the Premier League – this is a genuine opportunity of an incredible outcome.
And, what’s more, the Millwall players are performing like they believe they can get into the play-offs and win them.
With the Lions in this mood, it is hard to see where the next defeat is going to come from. And I’m convinced that behind the scenes, confidence has been high for a number of weeks that they can be the side to come through late in the campaign and set up a third successive year of heading to Wembley.
To supply some context, the Lions were 15th on New Year’s Day after a 2-1 reverse at Norwich City. But at the weekend they moved three points ahead of Bristol City – who were 17 points clear of them at the start of the year – and they are only a win behind matching fifth-placed Derby’s total. The Rams had a 19-point advantage going back to the beginning of 2018.
Next up is Bolton Wanderers tonight at the Macron Stadium. Phil Parkinson’s side finished 13 points ahead of Millwall in the 2016-17 campaign to take the second automatic promotion spot in English football’s third tier but now trail the Lions by 26 points.
You can rightly make the point that the Greater Manchester outfit have had financial difficulties since going up in May. But Sheffield United – who amassed 27 points more than Millwall in League One and have undoubtedly spent more  –  are also now left chasing a club who only squeaked into the play-offs last season with a last-minute Shaun Hutchinson goal at Bristol Rovers.
People will be wondering what the secret is to the Lions’ momentum. The answer is more than just one thing.
Firstly, they have some fine players capable of moments of quality. Take Jed Wallace’s superb opening goal against City, curling the ball brilliantly beyond Frank Fielding to push Millwall into an early lead.
The second was hardly scrappy either. Lee Gregory’s deft flick into the path of Steve Morison showed excellent awareness, the skipper’s ice-cool composure saw him delay shooting until he was sure he could tuck the ball past Fielding to claim his 90th goal for the club.
The second point worth making is the continuity in team selection. Harris has made just two changes to his starting line-up in the last 11 matches and Saturday was the fifth game in a row without any at all.
That consistency has helped in terms of partnerships right across the park. The weekend’s shutout was the 17th clean sheet of the season with 10 of those coming since early December.
They stay solid, don’t often concede and then hope for some moments of quality from their attacking players. Wallace’s delightful curler is a prime example of that.
This was a comfortable win over Bristol City but that also makes it sound like Millwall did not need to work hard – and they did. The visitors are certainly not the first to run out of ideas of how to break down the Lions, who have a rock-solid defensive structure, and they soon resorted to hopeful strikes from distance which failed to hit the target.
And it is the team ethic that comes to the fore time and again. A prime example is when Jamie Paterson managed to slip the attentions of the imperious Hutchinson, only for his break into the box to be ended by a sliding tackle from Shaun Williams. A sequence of half a dozen full-blooded challenges in quick succession in the closing stages got The Den – about 1,000 shy of capacity in the home areas – roaring their approval.
If Millwall do reach the play-offs then no-one is going to want to face them, particularly in SE16.
They have not lost at The Den since November 4 – a shock 1-0 reverse to Burton Albion. Barnsley and Ipswich are the only other clubs to leave with maximum points. The Lions are not so much  a different animal now, more one that has a fearsome appetite for the battle and confidence their tactics will yield positive results.
Millwall (4-4-2): Archer 6, Romeo 8, Hutchinson 8, Cooper 8, Meredith 8, Wallace 9, Williams 8, Saville 9, Marshall 8 (Onyedinma 80), Gregory 9 (Cahill 83), Morison 9 (Shackell  87). Not used: Martin, O’Brien, Elliott, Tunnicliffe.