BY RICHARD CAWLEY AT THE CHERRY RED RECORDS STADIUM

Millwall have not had a dull season since Neil Harris took charge, and that statement is still going to apply at the end of the 2018-19 campaign.

Just to summarise, Chopper’s management with the Lions has seen them win one promotion, reach two play-offs finals and also the quarter-finals of the FA Cup – twice.

That’s impressive in anyone’s book, especially when you also add in that eighth place finish in the Championship last May.

Without the ability to write this report after last night’s sixth round draw was made, it’s impossible to estimate how likely it is that they could be off to Wembley once again.

But only one more match separates them from another big day out at the national stadium.

Millwall and the FA Cup just work. Since the 2003-04 season, only four clubs have won more matches in the competition than them – Chelsea (58), Manchester United (52), Arsenal (46) and Manchester City (36). Their 31 victories puts them joint fifth with Tottenham.

The key for Harris will be ensuring that the FA Cup doesn’t have a negative effect on making sure they secure Championship football for a third successive year.

But it was a win-win for the Lions chief, who no doubt made finding out league results one of his first priorities after coming back into the changing room on Saturday. Bolton and Reading were both beaten heavily, rock bottom Ipswich’s point does not make their plight any less forlorn 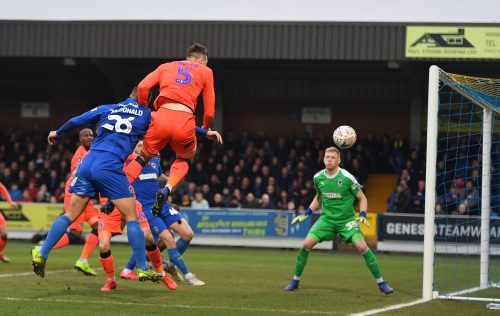 You can’t see Millwall’s players mentally switching off to the threat below – even though they have two matches in hand on all of them. It’s more the extra risk of knocks or suspensions from cup exertions that could have a greater effect on selection in the league.

But this isn’t the time for worrying about ifs, buts and maybes. It’s a chance to revel in another big win in a tournament that has alluringly entwined itself around the Lions.

It wasn’t as impressive as beating reigning Premier League champions Leicester City. It lacked the same kind of prestige as taking out Everton last month. But this was still big. Trips to Wembley never get tiresome.

Next month will mark four years since Harris took caretaker charge of the South London outfit. No blame can be attached to him for the relegation in 2015 when he replaced Ian Holloway – not only were all the nails in the coffin, the casket had been lowered and the mourners dispersed.

Their all-time record goalscorer has restored their identity. And he has stayed totally true to his principles of what a Millwall side should be about – uncompromising, willing to graft and playing as a unit.

They needed that resilience at stages on Saturday as they ensured that they did not follow in West Ham’s footsteps at the Cherry Red Records Stadium.

This was a third clean sheet in four for Millwall. And even a change to the backline – Shaun Hutchinson’s neck muscle injury seeing Alex Pearce start – did not unsettle the defensive unit. 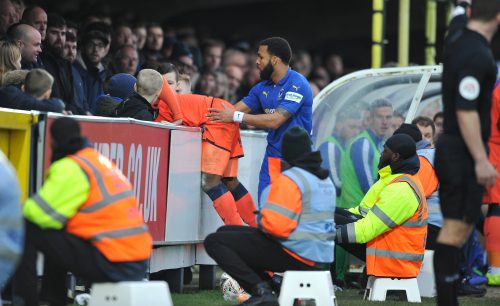 Pearce, despite a lack of significant action since arriving from Derby, was amongst their top performers. He gave Joe Pigott no encouragement early on as he won nearly everything in the air.

If there was one thing that did seem to spread a little nerves in those opening stages, it was Jordan Archer’s kicking. It led to the home crowd zeroing in on the goalkeeper, but he settled as the match went on. He made at least a handful of important punches and claims from testing balls coming into the box. And one quickly-taken release very nearly put Lee Gregory in – Andy Barcham just getting in a vital tackle.

There was also a correct – but tight – call that Andy Barcham was offside before being brought down by Mahlon Romeo in the box.

The Dons have failed to score in four of their last six fixtures – making that 4-2 victory over the Hammers such a stark anomaly.

Murray Wallace made no such mistake as Millwall took a fifth-minute lead. Ryan Leonard’s cross from the right was delivered with real purpose, and that was also an apt description of the Millwall left-back as he planted a bullet header past Aaron Ramsdale.

The summer signing from Scunthorpe has scored the decisive goal in the last two rounds – earning combined prize money of £540,000. The fee for his switch from Glanford Park was undisclosed, but it’s a safe assumption that cup booty would cover his cost with something to spare.

Millwall were unable to get a second goal, even though they fashioned the better opportunities after the interval.

Mitch Pinnock’s fresher legs allowed him to chase down Jed Wallace after the winger was threaded through by Shaun Williams. And Aiden O’Brien’s heavy first touch, after being cued up inside the box by Gregory, left him unable to find the requisite power on a shot, Ramsdale making a save. 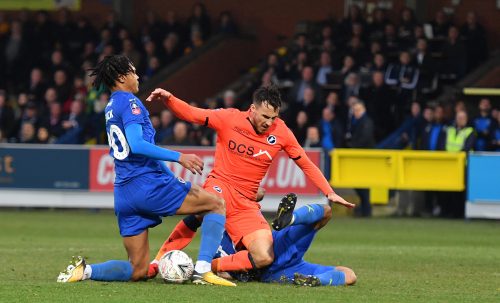 The on-loan Bournemouth goalkeeper also pushed away Williams’ low strike, the Lions captain showing slick control as he seized on a miscued clearance by Anthony Wordsworth.

Wimbledon were unable to make moments count. Michael Folivi was a nuisance as he drifted into pockets of space, willing to drive at Millwall, and he got their effort on target. It was straight at Archer, who seized full control at the second attempt.

Rod McDonald’s excellent raking cross from the left was walloped onto the signage on the top of The Chemflow End stand by Dylan Connolly.

Deji Oshilaja had headed over a Toby Sibbick cross too in the first period.

A little more poise could have boosted Wimbledon’s prospects of ending an unwanted run of never beating Millwall – a record that stands at three defeats and two draws.

This was only the second FA Cup fixture in the last 14 that the Lions had played away. It ended a run of four straight losses in the tournament when on the road.

Harris is only the second person to win promotion as a player and manager at Millwall – the other being Billy Gray in the mid-1960s. It would be some story if he did the same in terms of reaching an FA Cup final, he and assistant boss David Livermore starting the 2004 showpiece against Manchester United at the Millennium Stadium.

Stranger things have happened – it’s the FA Cup, after all. Expect the unexpected. 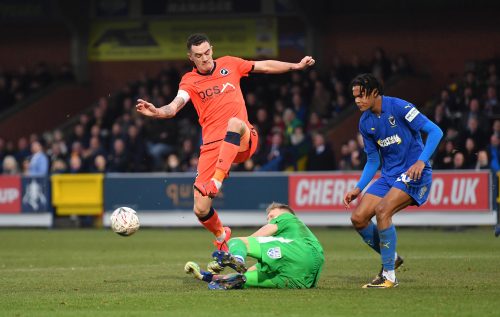