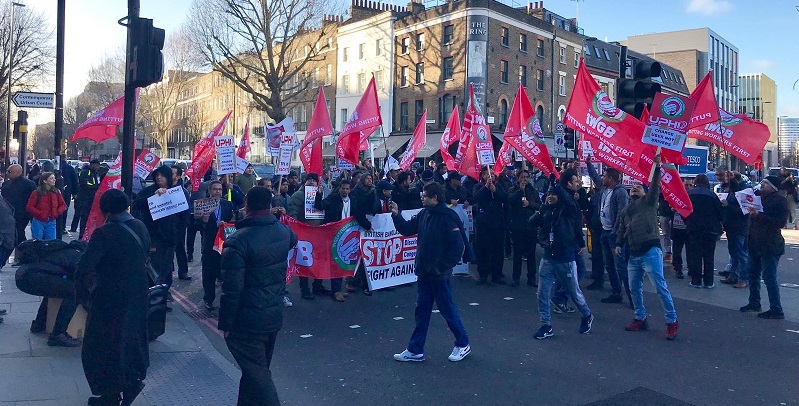 Up to 1,000 minicab drivers blocked one of South London’s busiest roads in protest at the announcement last month at congestion charges for minicabs, set to be introduced in April.

The protest by the Independent Workers Union of Great Britain (IWGB) blocked Blackfriars Bridge and Blackfriars Road on Monday from 10am until noon.

It was staged by United Private Hire Drivers branch (UPHD) and saw cabs parked along the Cut, Union Street and Blackfriars Road.

Protesters assembled outside Transport for London’s (TfL) Palestra House office and marched up to Blackfriars Bridge.

The drivers vowed to repeat the protest every Monday over the policy introduced by the Mayor of London and TfL, which they say amounts to a “tax on the poor” and will do little to reduce congestion.

TfL’s own impact analysis showed a disproportionate impact on poor and BME workers with 71 per cent of TfL licensed minicab drivers hailing from designated deprived areas and 94 per cent identifying as BME.

Black cabs drivers, which are 80 per cent white British, continue to be exempt from paying congestion charge. James Farrar, chairman of the United Private Hire Drivers Union, said: “Today we can see the anger felt by drivers. Hundreds of us have come out on the streets today to call on Sadiq Khan to halt his plans to extend the congestion charge to minicab drivers.

“We are not going to stop until he listens to the exploited workers of this city – every Monday we will protest against TfL until they undo the damage they are planning to do.

The ball is now in TfL’s court as we have raised our collective voices and stand united against this unjust and regressive tax on the poor.”

Caroline Russell, Green Party Assembly Member, said at the protest: “I am one of three Assembly Members who supported the Mayor on congestion charging for PHV, so I’m an unexpected supporter, but I believe that these drivers and UPHD are right in calling for TfL to charge the operators who make all the profits and not the drivers who are working long hours on low pay to cover rent on their home, the loan on their car and keep food on the table.

“Abdura Razzak Hadi, Uber driver and chairman of the London committee of the IWGB’s UPHD branch, said: “Drivers like myself, already suffering from Uber’s poverty wages, are now being hit by this ill thought out congestion charge.

Instead of targeting the pockets of multinational corporations, Sadiq Khan has chosen to introduce this tax on the poor, leaving us no option but to protest.

“Unless this charge is scrapped many of us don’t know how we will continue feeding our families and paying for a roof over our heads.”