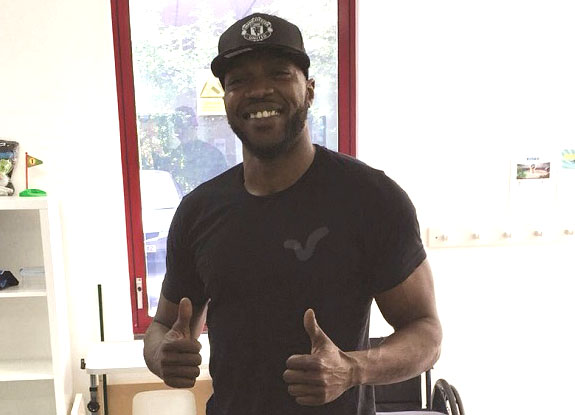 A shooting victim who was told he would never walk again is dreaming of working as a chef as he is now taking steps again, unaided, nine years later.

Darren Hinds was caught in the crossfire outside a house party in Lewisham in 2009. Surgeons told him when he woke up in hospital that he was paralysed from the waist down.

The bullet had shattered his spine. At first the athletic 24-year-old felt suicidal. He had to learn to cope with the depression and thoughts of his old life. But then, six months later, just as he had almost given up hope – and as his treatment was coming to an end – he started feeling a “fluttering” in his toes.

The Shell Road resident was studying for an NVQ in hospitality at Thames Valley University at the time. He loved to cook and play football.

He said: “The police came in to ask me some questions. But I didn’t know anything. I still don’t like talking about it. “Lying in hospital I felt like ‘I can’t do this. I’m going to have to kill myself’.

I felt like this is the end. “I get flashbacks. There was a big crowd, then everyone started screaming and scattered. Suddenly I fell over. I thought someone had just punched or pushed me. “Then I saw the blood.

My first year I dreamed about it a lot. It used to feel like the bullet had hit me again and I would wake up.

I wasn’t interested in the news reports. The memory is there, but I try to block it out as much as I can. It gets me thinking negative thoughts.”

He was transferred from Kings College Hospital in Camberwell after two weeks at specialist spinal hospital Stoke Mandeville.  It was more difficult for his relatives to visit him in the Buckinghamshire hospital.

Darren, who was on a ward with up to six people, said: “There were so many people in the same position as me there, or worse. It helped me accept it a bit more.

“Other people had broken necks and couldn’t even feed themselves. “One guy helped a lot. He used to laugh and joke. He accepted his accident. He had been in a motorbike crash.

He was happy to be alive more than anything. “He taught me not to think, he said to me ‘I am in a wheelchair for the rest of my life.’ Take it an hour at a time. Try to feel nice and uplifted for an hour. ‘Then maybe look to another hour. If you start to feel better. Then a day will pass. Then another day.’”

Darren stayed there for five months from August to December 2009. Then he felt a movement in the big toe of his right foot a week before he was due to be discharged. He said: “It was the best feeling I have had in my life. No partying or good times could beat it.”

This breakthrough came too late for his treatment at Stoke Mandeville, though. The process to have him discharged was underway and he was back home by Christmas. “I felt abandoned,” he said. “I went home and lay there for about seven months. It really hit me. I could see other people walking around and living like I used to. “But, I started being able to control a bit of movement in my toe.

Then feeling in my right knee came after that.” He had watched physiotherapists work with patients in Stoke Mandeville and used that as a model to create his own regime. His family clubbed together to buy him a walking frame.

At first he hauled himself up and tried to stand for as long as he could. Then he begun taking tentative steps.

Darren said: “Before the accident, my room was upstairs. My mission was to get back up there. “I’m also a bath man. Our bath was on the first floor. When I finally made it up, the first thing I did was have a bath, then lie down in my own bed. One of the best feelings ever.”

Then he was due back in to Stoke Mandeville for a check-up. They referred him to physiotherapists at Lewisham Hospital, but Darren felt they were not pushing him enough.

The 32-year-old, who was born in Jamaica, said: “My mum was a determined person. You have go through things and keep going. You can’t sit back and complain. “Maybe she gave me some of that determination.”

A doctor suggested he contact the Neurokinex specialist spinal cord injury unit. He said: “They have had endless, no holds barred enthusiasm. I felt like there was no limit. They set me task after task. “Then I took my first steps without the crutches.

These small little things have become the best in my life. Small steps, just being able to move a toe or walk without crutches. “I still have down days. Days I feel I can’t do this anymore. I just have to deal with it, try to reset myself, and think hour-by-hour.”

Darren wants to get to the point where he will be stable enough on his feet to work safely in a kitchen. When he gets there, he will return to training and look to become a chef. T