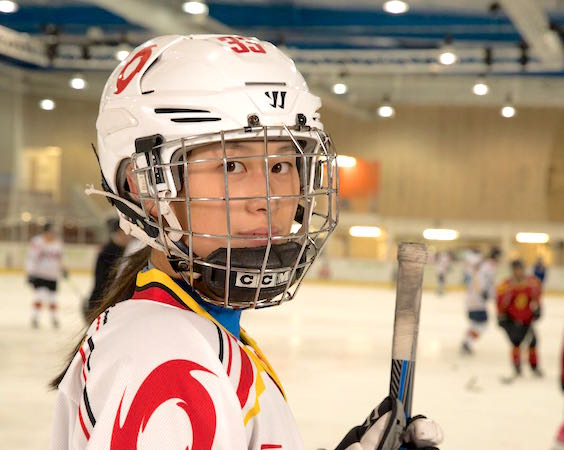 There were mixed fortunes for Streatham Storm in a home double header on Saturday with the club’s Division One team bagging a high-scoring win to keep up their push at the top of their league, while the Elite squad suffered a frustrating loss in the top flight.

Storm D1 ran out 10-6 winners in a goal-fest against Peterborough Penguins as leading goal scorer Parris Moore clocked up a hat trick to keep up the pressure on league leaders Basingstoke and stay well in contention for promotion to the second-tier Premier league.

The Elite team put up a strong performance against Solihull Vixens, outshooting the visitors 37-21 and leading into the final period, but eventually going down 5-2 to the league’s second-placed team. The weekend’s results left Streatham still standing clear of the relegation spot and there was plenty in their showing to give encouragement with 11 games still to play.

“The D1 gang are going very well and banging in the goals,” said Sam Nicoll, Storm head coach. “We need to be able to play a stronger third period in the Elite league, but we are still making progress.”

Against Peterborough, D1 took an early lead through Jehna Devraj, then gave up three goals before Shauna Mann and skipper Sorana Churchill combined to set up Sue Parsons to leave Storm trailing by a goal at the first period break.

The home side came out all guns blazing in the second, rattling in four unanswered goals in five minutes through Parris (2), Mann and Alina Tuerk. The Penguins pulled two back, but a third goal for Parris sent Storm into the second break leading 7-5.

With the visitors still posing a threat, Storm were grateful for a plucky performance in net by debutant Charlotte Field-Howick who grew in confidence as the game went on, batting away some big shots to hold Peterborough to one goal in the final period.

Up the other end, Tuerk netted her second and there were two goals for surging defender Jessica Preece. She scored the goal of the game with a minute to go with an end-to- end rush capped by a stinging wrist shot that ripped into the top corner.

“That’s three wins in our last four, plus a draw against Basingstoke,” said Churchill.

“We are determined to keep up the pressure at the top of the league.”

Storm Elite showed their potential with a strong performance in the first two periods against Solihull in a fast-paced, end-to- end game that was a fine advertisement for the women’s game.

Trailing by a powerplay goal on a bench minor in the first period, Storm dominated the second session, heavily outshooting the visitors. Sarah Barton equalised in the 28 th minute after good work by Danielle Hogan, then Storm took the lead with a peach of a goal by Margaux Cesar. Tiffany Trood stormed down the left wing to send an inch- perfect pass to Cesar arriving at the far post. The young French woman took one
touch and converted with panache.

The game turned in the 45 th minute when Storm looked all set to take a 3-1 lead with the net begging after a strong play down the right. But the puck stayed out and Solihull swept up the other end to catch Storm cold with an equalizer.

A Vixens powerplay goal two minutes later was a heavy blow and the visitors stretched their lead to two goals with five minutes to go. Storm pulled their goalie on a powerplay with a minute left to give them two extra skaters, but Solihull managed to grab the puck and fire in a long-range empty-netter to end a contest that was more even than the score suggested.

“It’s frustrating as we are so close to really competing with the top teams, but our confidence is still high and we will get results in the second half of the season,” said captain Joanna Li How Cheong.

The next Storm home game is an Elite league clash with Kingston Diamonds on Sunday February 17. Face-off 18.50, entrance free.