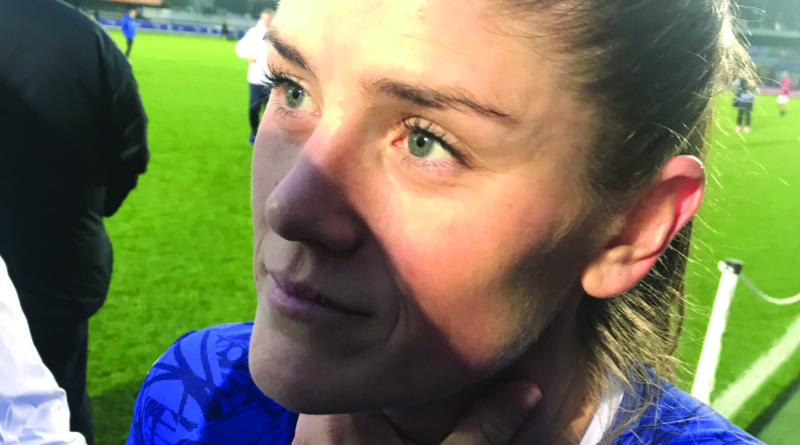 BY PAUL LAGAN at Kingsmeadow Stadium

Chelsea won 1-0 thanks to a Maren Mjelde second half penalty, but this was a well below par performance from the league leaders as Manchester United came to town to prove that they deserved to be in the WSL1.

That they did with a highly disciplined if rugged display, that suggests Casey Stoney’s side will be, in the not too distant future, a serious contender for the title should they progress even further and add a killer instinct to their counter-attacking philosophy.

Chelsea had a shocker, truth be told but the introduction of ‘Mini Messi’ Fran Kirby was the catalyst for the three points that keeps the Blues top of the pile.

Within 20 seconds  of her introduction  for Guro Reiten, Kirby was upended in the United penalty area.

Up stepped Mjelde to crash the ball home.

At the end of the season, should the Blues prevail, this result, not display will be the thing that is remembered.

Excellent to build-up play on five minutes by the home side almost reaped dividends but Jonna Andersson’s goal-bound short, having being set up by Beth England was cleared for a corner.

But the visitors, on the break looked dangerous every time they crossed into the Chelsea half.

United’s Amy Turner was given a yellow card for not releasing the ball when she fell on it, on 15 minutes.

Lauren James, brother of Chelsea men’s Reece almost twisted Millie Bright into the ground, on 17 minutes, after which, her curling, edge of the penalty box left-footer was well wide.

Katrin-Ann Berger made a simple save from Jackie Groenen, two minutes later as United looked to take advantage of the Blues’ sluggish start.

Chelsea forced United keeper Mary Earps into  her first save of the game on 23 minutes when Bright fed the ball to So-Yun Ji. She knocked the ball onto in-running Ramona  Bachmann, whose powerful, drive was parried away for a corner by Earps.

Ji shot wide a minute after a four-minute break in play after James left a trailing leg in the body of goalkeeper Berger who needed on-field treatment.

Seconds later Cuthbert should have put the Blues ahead when she beat the offside trap, raced to the edge of the United area, but screwed her right-footed shot wide of Earps’ goal.

Within 15 seconds of entering the pitch referee Packman pointed to the spot after Kirby took a tumble after what looked like a legitimate tackle by Mille Turner.

Up stepped Maren Mjelde to smash the ball low and to Earps’s right and into the back of the net to put the Blues 1-0 up.

A slip by Ji allowed James a clear run to goal, on 78 minutes, but she thumped her shot high and wide of Berger’s goal.

Bachmann was replaced by Drew Spence with 11 minutes to go as Hayes sought to add a bit more steel in the midfield.

Quite how Chelsea’s goal wasn’t destroyed on 83 minutes is anyone’s guess but Ella Toone’s thunderous right-footed bullet smashed off the crossbar, bounced on the line and was cleared my Mjelde.

Ji was replaced by Jess Carter with five minutes left on the clock and that helped to run the clock down and to three vital points.

The Blues are at home on Wednesday when they face Tottenham Hotspur in the Conti Cup.