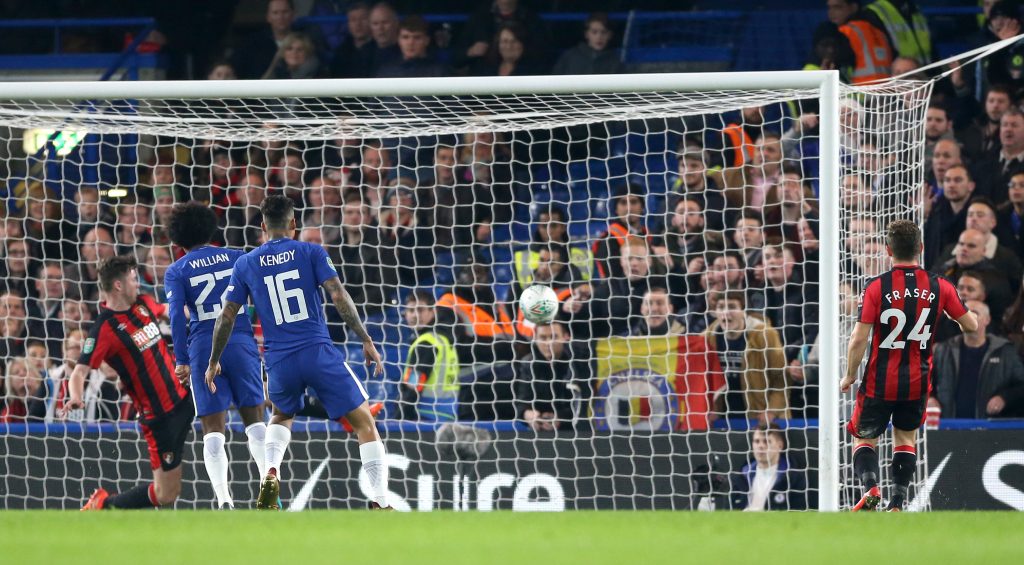 A sensational final two minutes saw Chelsea almost throw the game away but then win it as Alvaro Morata slotted home to see the Blues into the semi-final of the Carabao cup at the expense of luckless Bournemouth at Stamford Bridge tonight.
Willian had opened the scoring for the Blues on 13 minutes and for the remainder of the game, were on the back-foot as the visitors prodded the Chelsea rearguard.
With 90 minutes on the clock, they got their just rewards though Dan Gosling, before substitute Morata broke the hearts of the vociferous South Coast fans who dreamt of taking the tie into extra time – the Blues winning 2-1.
Numerous changes by both managers from the starting 11 of the weekend, made of a mix of uncertainly and dubious quality.
Chelsea’s Nathan Ampadu, an outing for Brazilian Kenedy and a stint between the sticks for Willy Cabakllero were the stand-out performers for the boys in Blue. Amnpoadu for his coolness, Kenedy for his trickery and Caballero for his experience.
Other than that it was another game notched off in the already hectic festive scdheule that we the Blue face resurgent Everton at Goodison Park on Saturday
Ethan Ampadu took just 80 seconds to announce his intent by carelessly hacking frown Jermain Defoe.
The 17-year-old was justifiably booked.
The Blues took the lead on 13 minutes with when Michy Batshuayi’s deft flick found Cesc Fabregas on the left of the Bournemouth penalty area. He cut the ball across goal and Willian was on the spot to side-foot home from six-yards out.
Defoe’s night ended early. he failed to recover from that clatter by Ampadu and was replaced by Jordan Ibe on 18 minutes.
Willian bizarrely stopped and allowed his challenger Lys Moussett race clear and get away a shot, which thankfully fo the Brazilian, the ball went in to Willy Caballero’s side-netting.
Willian committed the cardinal sin in football of not stopping until the ref whistled for a foul.
There was no foul and Willian should have attempted to close the player down.
A beautiful volley by Gary Cahill inched over Artur Boruc’s crossbar on 21 minutes after another attack by the Blues fizzled out and the Chelsea skipper saw no option other than take matter’s into his own hands.
There was no change of personnel at half-time., but the visitors certainly decided to have a go. Chelsea ere forced back to defend deep and Mousset was unlucky with a slice left-footer.
So concerned by this was Anton io Conte that he replaced speed merchants Lilian and Pedro and brought on Eden hazard and Tiemoure Bakayoko to stem the tide.
Batshuayi was replaced by Alvaro Morata on 73 minutes.
Right on the stroke of full-time substitute Jordan Ibe fed dawn Gosling who smashed the ball home for a deserved equaliser.
With four added minutes on the clock, Chelsea needed only one of them as they instantly went right up the other end. Hazard back-heeled to Morata who tucked the ball home under Boruc’s body to seal victory.