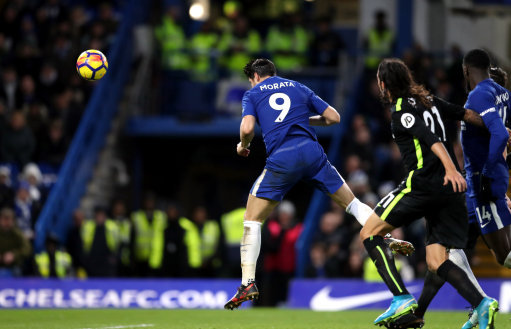 Eden Hazard teased and ultimately destroyed resolute Brighton & Hove Albion this afternoon as the Blues overcame the South Coast side 2-0 at Stamford Bridge with Alvaro Morata and Marcos Alonso netting for the champions.
Chelsea remain in third place behind the two Manchester sides, and face Stoke City at the Bridge on Saturday to end a frustrating and inconsistent fist half of the season for Antonio Conte’s side.
While Champions League qualification is still very much in their hands, they are relying very heavily on the services of Hazard.
He was everywhere for the Londoners against Brighton.
If he was not running riot at the visitors’ defence, he was popping up in his own half to pick the ball up from his defence to start another attack.
With the ball at his feet, he looks up, see no one to play it to, and decides to take the initiative and push forward himself, generally creating a chance or getting hacked down in the process.
Either way, he currently make him pivotal to any potential success for Chelsea this season.

The game itself was bitty in the first half, but with Hazard in full flow they dominated the second half. Some sloppy defending almost raps some dividends but it was too late for the away side.
The best effort of the first half came on 19 minutes. After excellent build-up play by Eden Hazard, Cesc Fabregas and Antonio Rudiger, set up Tiemoure Bakayoko, who somehow, from six yards managed to drive the ball wide of an open goal.
A Fabregas effort from the edge of the Brighton penalty area five minutes before the break took a slight deflection on the way but was comfortably held by Mot Ryan.
Conte must have given his tired charges a rollicking at half-time as they scored after just 40 seconds of the restart. The ball was clipped in perfectly by Cesar Azpilicueta and it was met, full on the head of Alvaro Morata, who planted the ball firmly past the desperate dive of Ryan.
That was they Spain forward’s 12th Chelsea goal of the season.
Hazard should have doubled the score two minutes later, but he screwed his right-footer wide of the Brighton goal.
A fine save from Ryan denied Marcos Alonso a trademark free-kick on 58 minutes when the Spain defender curled in a goal-bound a tantalising left-footer from 25 yards which the stopper tipped away for a corner.
But seconds later he was on the spot to glance home from six yards a Fabregas corner to double the home side’s goal tally.
The Blues should have scored a sensational counter-attacking goal on 67 minutes when Hazard and N’Golo Kante ripped right through the heart of the Brighton rearguard. Kante fed Hazard again and the mercurial Belgium jinked his way through a couple of defenders, before slotting the ball past Ryan, but in the goal line was Lewis Dunk who hacked the ball clear.
Conte decided to give man-of-the-match Hazard a rest on 73 minutes, replacing him with Willian.
From that point on, it was game over anyway – three points in the bag. Now the Blues have to hope Manchester City lose three or four games.