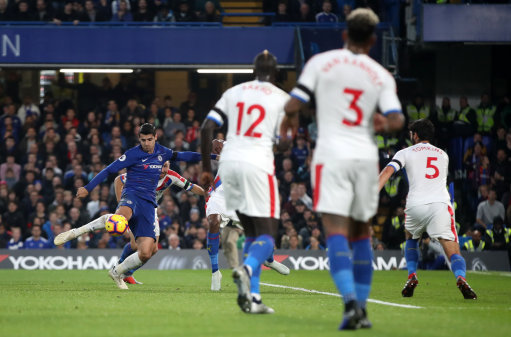 Alvaro Morata smashed home a brace to put the Blues on the coat tails of Premier League leaders Manchester City as the Blues dispatched tough but limited Crystal Palace 3-1 at Stamford Bridge this afternoon.

Chelsea leapfrog Liverpool with a superior goal difference with 27 points, two behind City.

This was far from a vintage Chelsea performance as the visitors made it difficult for possession-based Chelsea to do much when they arrived in the final third of the pitch.

The Eagles looked dangerous on the counter-attack but those became fewer as the game wore on.

It was the introduction of Eden Hazard in the second half with the game tied at 1-1 that returned the match in the home side’s favour.

His mere presences lifts his team-mates and sends shivers down the spins of the opposition.

Pedro almost glanced the Blues into an early lead on two minutes, after excellent set-up play by Willian on the left.

However for the next 20 minutes, the Blues failed to create much and Palace were happy to counter-attack when the opportunity arose.

But with 73 per cent possession under their belts, the Blues would eventually get close enough to to Wayne Hennessey’s goal. And on 32 minutes after Pedro had two strikes, the ball fell to Alvaro Morata who comfortably scored from close range.

It was the Spain striker’s third goal in the last four Premier League games.

There were no changes of personnel at half-time but it was the visitors who struck first, eight minutes after the restart. Andros Townsend smashed home a low, right-footer from just inside the Chelsea penalty area across a prone Kepa Arrizabalaga and into the back of the net.

Luiz had an excellent chance to restore the lead on 63 minutes – a Willian free-kick was met full on the head of the Brazilian, but Hennessey, produced a ‘Hollywood’ save to parry the ball around the post.

Head coach Maurizio Sarri had seen enough of his lumbering players and opted for a double substitution – Hazard and Mateo Kovacic for Willian and Ross Barkley.

Within seconds, the Blues had scored. A simple Hazard curling free-kick went deep to the far post. Up popped Morata to, firstly control the ball, and then in one swift movement lash a low left footed drive past Hennessy from an acute angle and into the far corner of his near.

With 20 minutes on the clock, Pedro found himself in the right spot to cooly side foot home Alvaro Alonso’s left byline cross to stretch the lead.

Cesc Fabregas entered the fray with 10 minutes left to shore up the midfield – he replaced Jorginho.

Morata had a glorious chance to net a hat-trick but instead of taking the ball around Hennessey after racing clear, he opted to chip the goalkeeper. But no one had told Hennessey and the stopped gleefully snaffled the sloppy effort.

Next up or Chelsea is a trip on Thursday to face BATE Borisov in the Europa league before returning to the Bridge on Sunday when Everton come visiting.