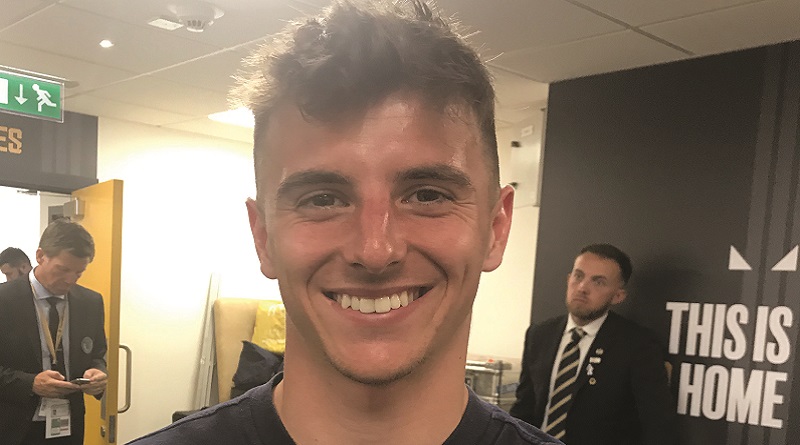 Mason Mount is determined to play as many games for the Blues as possible, and hopes to show boss Frank Lampard he is back to full fitness.

The young attacking midfielder was expected to sit out last night’s Carabao Cup match at home to Grimsby and be fully ready for Saturday’s must-win home league encounter against Brighton.

Mount limped off with an ankle problem in tears in the Champions League defeat to Valencia last week, but surprisingly returned on Sunday as the Blues lost 2-1 to Liverpool.

Mount, 19, said of the injury that he felt could have derailed his season: “As soon as I did it, in my head I thought it would be a long-term injury.

“We iced it and we let it calm down a bit. Then we realised it wasn’t as bad as I first thought. The next day I was kind of jogging on it a little bit.

“From then I knew there was a chance of being involved at the weekend.

“Obviously there was swelling and there is still swelling there now but it is solid. It felt good as I trained on the day before the game so I was pretty positive leading up to the game that I could be involved.

“I think you have got to block that out of your head and to just try to focus on the game. When I had that chance at the end which I thought I should have scored but I rolled my ankle a bit.

It still felt fine afterwards. It was fine. It was good throughout the game. It felt solid so it was alright.

Chelsea have yet to record a win at Stamford Bridge this season – something that Mount sees as an anomaly but one he wants to sort out.

“If you look at the games we have had we can take positives from every game we have had. We need to win games at home, that’s a big focus.

“We are doing well away and now the focus is building that fortress at home and when teams come here they know it will be a tough game. We showed that in the second half against Liverpool.”

Are the players doing something different away from the Bridge? Mounts thinks not.

“I don’t think it is too much of a difference. I think Liverpool are a very good side and they start the game well from two set-pieces which you can’t do very much from that with their quality. I thought they didn’t create much in open play.

“So I think we just need to be concentrated when the ball goes out of play so we are switched on and ready for anything to happen.

“The set-pieces are causing some trouble. Liverpool scored from two and when you go 2-0 down then it is quite tough to get back into the game.

“I thought we were at the end but if you switch off at set-pieces at this level then you get punished. It happened twice so that’s something we will look at and we have been looking at. We need to keep working on it.”

Despite the lack of home wins, there is still a lot of goodwill flowing from the fans in the stand.

“Yeah, I think obviously the fans watching saw how much we put into the game,” said Mount.

“How hard we worked throughout the whole game.

“They probably feel as much as us that we could probably got something from the game at the end.

“It could easily have been a draw if we nick a goal so, they are watching the game and can see how much we are running, and want to win the game and want to play for the badge, so, yeah, that home win is due and we need to focus on that and hopefully against Brighton on Saturday, we can do that.”