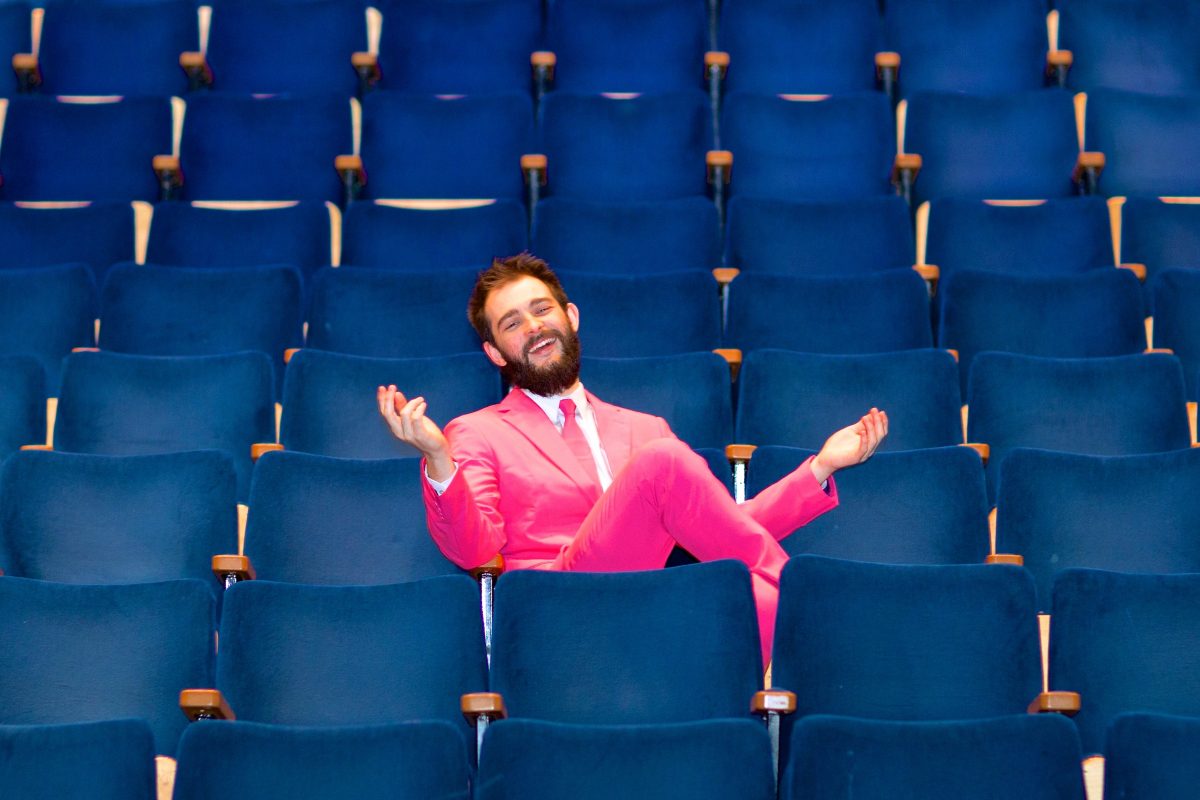 For the past decade or so, we have been supporting the development of new theatre here in Greenwich, with many of the companies and artists involved going on to great things in London, around the country and around the world. Since opening our new studio theatre in 2017 we have a space dedicated to that process, and the latest artist to benefit from that is Nick Gilbert.

Nick has been a member of Zoo Co (regulars here at Greenwich Theatre since they won the Les Enfants Terribles Edinburgh Award in 2014), but now he is striking out on his own to make a new show. We have hosted two periods of development rehearsals for Nick, trying out new ideas and sharing them with invited guests, but now for the first time he is ready to share his new show – Mr Brightside – with public audiences.

I asked him to describe how the idea for the show came about.

“I work in a theatre company with three women and about four years ago during a workshop the facilitator asked me what it was like to be the only male in the company. I had never thought about it before but the more I looked into it and talked about it with both men and women it was interesting to see how gender was at play all the time. Most of us, as soon as we are assigned our gender at birth, are then probably raised a certain way and treated a certain way by everyone we meet. This then affects how we act in the world and the things we do.”

The prevalence of discussions around gender are currently at an all-time high. From the #MeToo movement, which has unmasked an avalanche of often (though not always) gender driven abuses, to singer Paloma Faith’s headline-topping decision to raise her baby gender-neutral, to the pay-gap that still exists across almost all fields of employment, gender is topping news feeds on a daily basis. We exist in a society where it remains near impossible to avoid the impact of our gender on our life experience.

However, regardless of lived experience, I am always cautious about encouraging autobiographical theatre – making and performing a show can be very rewarding, but autobiographical theatre can often become more about the performer and the process than the audience. That is not the case here though. As well as reflecting on his own life, Nick has taken a diverse set of voices and combined them in the show, interviewing a wide range of men about their experiences and weaving their thoughts, some directly as audio recordings, into the performance – and the result is undoubtedly as fun for the audience as it is reflective.

“Inspired by the song by The Killers, our Mr Brightside gradually became this game show host and the audience become the studio audience for his TV show – and they will certainly get involved with some weird and wonderful games during the show. It goes beyond that as well though. There is also space for the audience to offer thoughts and ideas to the mix which will hopefully inform what happens on stage.”

This kind of work is exactly what the Greenwich Theatre Studio is for. New ideas, presented in a new way, with artists given the chance to experiment and local audiences given the opportunity to support, and celebrate, the work going on right at the grass roots of British theatre.