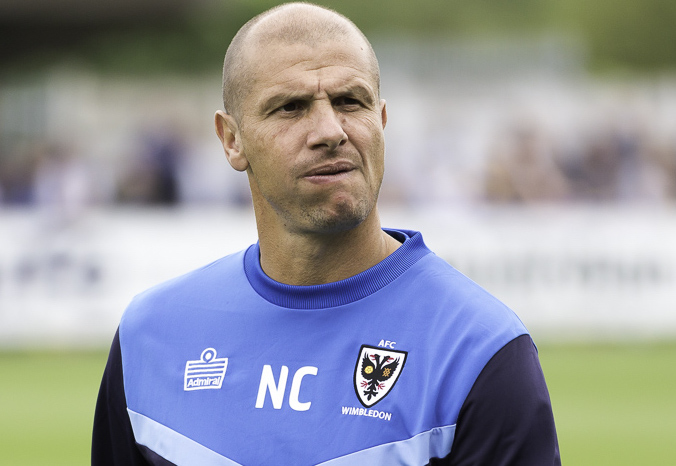 AFC Wimbledon Sport
2nd November 20171st November 2017 Richard Cawley 0 Comments
AFC Wimbledon assistant boss Neil Cox reckons Saturday’s FA Cup first round tie against Lincoln City has all the ingredients to be a classic, writes Tom Edwards.
The two sides have a great history in the tournament.
Wimbledon famously won the trophy in 1988 when they beat Liverpool – the powerhouses of the domestic game in that era.
Lincoln dumped out Brighton, Ipswich and Premier League Burnley as they became the first non-league side to make the sixth round since 1914 – losing 5-0 to Arsenal.
The Imps won promotion from the National League last season and sit three points outside the League Two play-offs.
The Dons have lost three games in a row but the FA Cup gives them a chance to turn their attention away from their struggles in League One, dropping to 20th after Saturday’s 1-0 derby reverse at Charlton.
Cox said: “Considering what Lincoln did last year, and our own history in the cup, it should be a real classic.
“This is the FA Cup first round – everybody looks forward to it – and there is no danger that we won’t be up for it.
“We went to watch them last week and we know it’s going to be a difficult tie for us – we’ll be ready for it though.
“There will probably be a lot of press around the game, but we’re ready for that added pressure. It’s nothing that we shouldn’t be able to handle.
“We know our fans will be behind us all the way.”
One issue Wimbledon will have to deal with is the potential absence of striker and top-scorer Lyle Taylor, who limped off before half-time in their midweek EFL Trophy defeat to Luton Town.
The Dons have only scored nine league goals this season – the lowest total in their division and the 27-year-old has accounted for a third of those.
Cox said: “We think he’s got a bit of a kick on the calf.
“We’re hoping he’s going to be okay, but we’ll have to wait and see what happens.”
Cox is confident of the depth that Wimbledon’s young guns and players rested in midweek should provide.
“Every place is up for grabs – that’s what we tell the youngsters,” he said.
“If they train hard, the chances will come. The more minutes young lads like Toby Sibbick and Egil Kaja get, the better we will be.
“It was good to see Jonathan Meades back against Luton. He’s been out for a while and we’ve missed him. For him to get through 70 minutes was a real bonus for us, and it was good to have Harry Forrester back as well.”