SGN – formerly Southern Gas Network – have also agreed to donate £5,000 to the A&E department of St George’s Hospital in Tooting, as well as £3,000 to Wandsworth Foodbank after the problems.

The damage to the network was caused by a third party contractor on Friday 6 March and work lasted for two weeks.

SGN also thanked the 1,300 families and firms which were affected. Glenn Norman, director of operations (South), said: “We appreciate it wasn’t easy for people to be without their gas supply and we

are very grateful for the tremendous support we received from the Tooting community. Our
engineers were particularly grateful for the ‘thank you’ card and chocolates that one young
resident handed them after her family’s gas supply was restored.“When a third party damaged our gas

network in Tooting, water flooded our pipes which affected gas supplies to more than 1,300
local properties.
“It was a highly complex engineering operation to remove all the water and sludge from our
pipes and restore gas supplies. In some areas, we had to completely replace pipes and gas
meters because they had been so badly blocked by the sludge. We had over 100 engineers on
the ground each day, drafted in from across the south of England. They pumped out over
115,000 litres of water from our gas pipes using syphon tankers operating day and night.”

Many of those who were affected are front-line NHS staff and students at St George’s Hospital, Tooting. 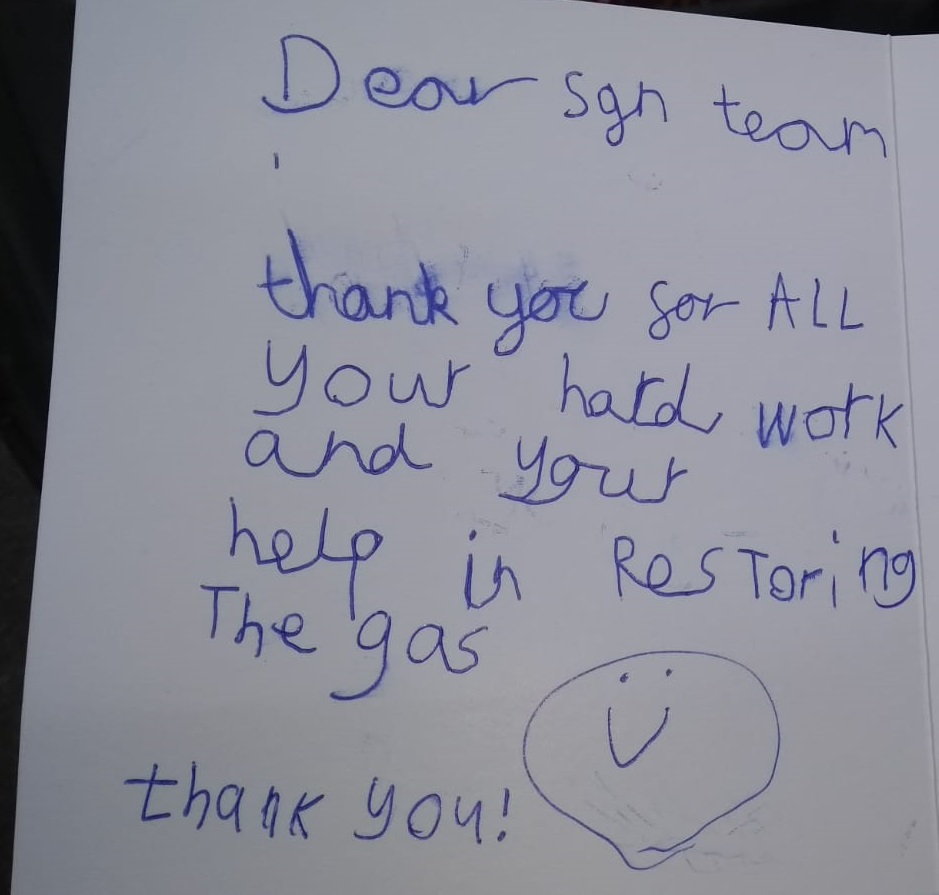 Glenn Norman added: “We would like to show our
appreciation to them, as well as the wider Tooting community, by making a donation of £5,000 to
the local NHS Accident and Emergency department at St George’s Hospital.Doctor Rosena Allin-Khan, MP for Tooting, has been in daily contact with SGN since the disruption started to make sure they were providing full support and compensation to those affected. SGN agreed to provide a heater and a hot plate to everyone who needed one, as well as organising free showers at Tooting Leisure Centre, free laundry at a launderette and eventually hotel accommodation for those who were without gas supply for more than 10 days. Doctor Allin-Khan suggested the £3,000 to Wandsworth Foodbank – and SGN agreed to pay an additional day of statutory compensation for all those affected.Dr Allin-Khan MP said: “I’m glad Southern Gas Network have agreed to donate this money to St George’s Hospital A&E department, and to Wandsworth Food Bank. I know it won’t make up for the problems and discomfort caused to many people by the serious disruption to the gas network, but the money will be put to good use and will help those in need. As many of the worst-affected buildings were apartments for NHS workers, the donation to the hospital is particularly appropriate.

“I’ve been in daily contact with Southern Gas Network to get these problems sorted and to ensure they were providing people with important resources to get them through the disruption, such as heaters and hot plates, as well as showers and hotel accommodation where necessary. I’m also glad they’ve agreed to pay an extra day of statutory compensation to all those affected.

“Everyone should now have had their gas supply fully restored, but if they are still experiencing problems then please do get in touch with my office and we’ll respond accordingly.”