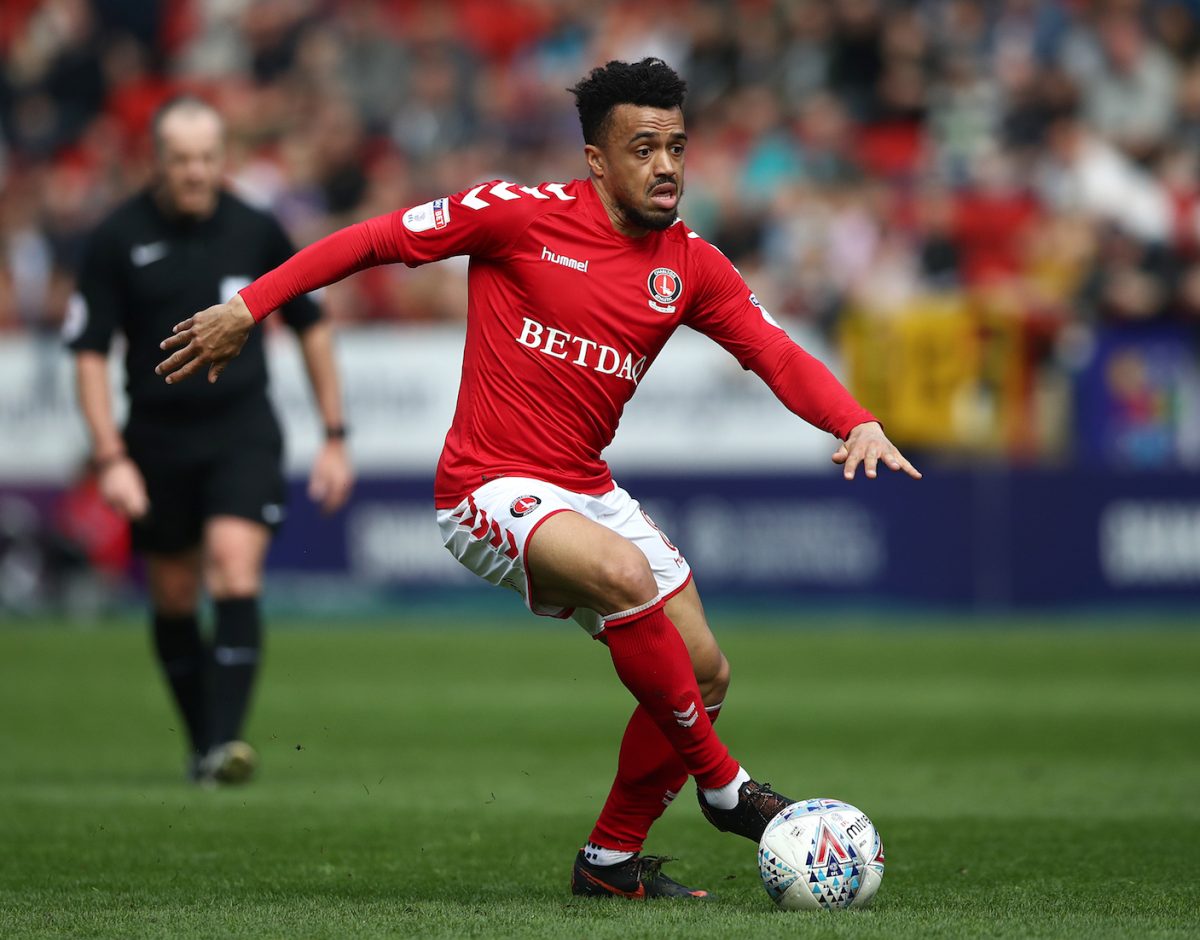 Nicky Ajose has revealed his Charlton team-mates played a big part in his January recall to South London.

The 26-year-old striker was loaned to Bury at the start of the season but ended up being recalled in January after struggling for game time at Gigg Lane.

Ajose scored the vital winner at Portsmouth last weekend to boost Charlton’s play-off hopes – his first goal for the club in exactly 12 months – and seems to have a new lease of life in SE7 under caretaker boss Lee Bowyer.

The former Manchester United youngster is still unhappy at comments made by former Addicks boss Karl Robinson that he wanted out in the summer.

Arguably only the transfer shackles being placed on the Liverpudlian in the January window saw Ajose heading back to SE7 to boost the number of attacking options.

“I think a big part of me coming back were the boys,” said Ajose. “Karl asked a lot of them if they wanted me to come back and they all said yeah. That is nice for me to hear. I’m not sure Karl was too bothered, to be honest. But it meant me getting back into the building and I have trained well.

“I knew if I was given an opportunity I could do something.”

Ajose has had a wait to be back on the scoresheet for Charlton, who he joined in an £800,000 deal from Swindon Town in the summer of 2016.

He featured just three times after netting at Millwall and was loaned back to Swindon at the end of January 2017.

His first start for the Addicks this season came in Bowyer’s first game in charge, a 2-0 victory over Plymouth just over a month ago.

“Scoring at Portsmouth was special for me,” he said. “It’s probably the first proper chance I have had. I’m used to scoring regularly and having lots of chances coming to me, individually that has not happened.

“I try to stay focused and ready. It might not have come until the last day of the season. I feel I’ve contributed anyway to the team and the results but as a striker I’m never going to shy away from the fact I want to score goals, it’s my number one priority.

“I’ve shown another side to my game. People might label me as different things, like I’m lazy. Slowly but surely people are realising that is not the case and everyone knows I can finish when I get an opportunity. If I show both sides I should be a good player for Charlton.

“I never wanted to leave in the summer. It was difficult, the way it was portrayed. If I’d been told [by Robinson] ‘you and Josh [Magennis] are my number nines I would have happily stayed. But it looked like there were five strikers at the time because he was bringing Stephy [Mavididi] in.

“It didn’t fill me with any confidence and I felt I was a bit-part. I have come back and Bows has said to me from day one that he likes me as a player, to work hard and that my qualities will shine through.

“I don’t think my quality has really come to the fore yet but I have been effecting the games in a different way.

“It hurt me to leave but I couldn’t afford not to be in squads all season. I came to four or five games when I was at Bury. They were one of the favourites for promotion but have been relegated with five or six games to go – the move looks silly looking back.

“That’s all in the past. I’m back in the building. I’ll be at Charlton for the remainder of my contract as long as I have anything to do with it. I want to show the fans I want to be here and hopefully next season that will be in the Championship.”

Ajose arrived with a big reputation after 24 goals in 38 matches for Swindon.

He recently described Russell Slade’s football as “minging”. And he is not convinced that the experienced boss even had him as a transfer target.

“I was told that Charlton were in a strong position to sign me even before he got the job,” said Ajose. “I signed for the club because of the name, the size of it. My mindset was one year in League One, playing every game and going up to the Championship.

“I had offers to go straight to the Championship but my worry was being involved. I was 24 at the time and didn’t want to be the last choice out of four strikers.

“After a really good season I wanted to be an integral part, not go somewhere and not be involved.

“I do call it how I see it [in terms of Slade’s spell in charge]. We had a meeting and Russell was there because he called it. I said the same thing – the style was not right. It was not what is should be for Charlton. Ademola Lookman couldn’t get in the team every week and now he is apparently doing wonderful things in the Bundesliga 18 months later.”

Charlton’s hold on a play-off spot was strengthened by Plymouth only drawing at Rochdale on Tuesday.

A second promotion of Ajose’s career – he was part of the Bury side which finished League Two runners-up in 2011 – would finally bring some success both his and Charlton’s way.

There must have been silverware at Manchester United, coming through the youth ranks?

“That doesn’t count,” he responds. “That is building you up to be a professional footballer. I’ve won a few bits and bobs but the only thing of note is being promoted out of League Two.

“All I’m thinking about now is can I be a part of the team which gets Charlton back to the Championship? That would be magnificent really. The older boys at Bury kept drilling into the young lads at Bury that promotions don’t come around every year – even just fighting for it.

“On Saturday at Portsmouth it felt like something is happening.

“If we get through these next two games – we could need two more points, six points or a swing on goal difference – then I’m confident we’ll beat any team over two legs.

“We’ve got big characters, if we get to Wembley then I’m sure we’ll be fine.

“At the start of the season Charlton has got to be in the top six in this division, but you should break the season down into thirds. Up until October or November the lads were flying, then there was a horrible run until just before Karl went to Oxford and then we’ve done really well again.

“We’d have been comfortably in there with just a few more points from that middle third. Now it is going down to the wire. That’s exciting. If you make the play-offs then it is the best way to go up.”