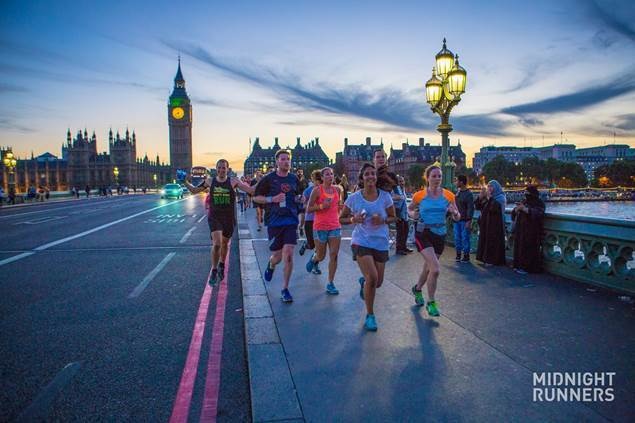 The lighting is amazing, the people are beautiful, the blood is pumping and you are having a fabulous time making new friends.

No, it’s not a night out at the Ministry of Sound. It’s a two-hour jog with Southwark’s Midnight
Runners and your legs will take a lot more punishment than a quiet little bop to My Way at the local Darby and Joan club.

There were about 200 runners on night of April 17 which began at the Sama Bar near Upper Ground in Southwark. It was started by a couple of friends Greg Drach and Chris Dorffer who organised a jog on community website Meetup.com which ended up having 13 people take part.

But it has already mushroomed into something of a phenomenon – the London event was the
beginning, and there are now similar ones in Barcelona, New York, Berlin and Boston.

Their website says: “When you are running together, why wear headphones? It means you cannot get to know the person next to you. The idea of carrying a small portable speaker made our music more social and suddenly the act of running became a shared experience.

“Different pace groups? They suck. They rip up friend groups and split the team. It is so much better to stop and wait for people close to the back of the pack, right? So when you are waiting you may as well throw in some burpees and situps.”

Just be sure you are properly prepared to be swept along with the enthusiasm, find yourself running far too fast, and suffering for days afterwards as a result.

My legs took a bit of a beating. Three days later, calf and thigh muscles were still creaking like a cupboard door in a horror movie.

The miracle was that my flappy old feet were unscathed, which might have been down to some bendy new Reeboks.

If only I had done some running in the previous days, weeks, years or even decades.

The 13k was the furthest I had run since the Edinburgh Marathon in 1984. The only jogging I had done in the intervening 32 years was solo and not timed, which was, in comparison, well, a walk in the park. I do cycle about 100k a week, so should have been bendy and bullish enough to cope with 13k.

But there are several kinds of fitness and mine was not the required one. I had expected my joints to suffer, but they were not the problem – it was the lactic acid build-up which felt like my muscles repeatedly smashing up against their attached bones.

But the scenery was breathtaking, as were the people.

I was greeted by breezy, beneficent beauties, of both genders, who looked fit enough to sprint the course, have a hearty post-prandial meal and then patronisingly applaud me home.

The route started on one of South London’s most beautiful plots of land, the silver birch-lined patch of green north of Tate Modern.

The gentle warm-ups and accompanying music were deceptive – I made the mistake of standing at what  turned out to be the front of the pack as the starting gun sounded.

Over the course of the next six minutes, what seemed like thousands of people trotted past me on the way to City Hall. By the time I reached Potters Field, staggering, they were already on their 40th sit-ups.

There was some respite, but then I was expected to join my neighbour in a two-person flexing exercise, the benefit of which escapes me. The 20-somethings near me lowered their eyes and looked elsewhere for partners.

The next leg was across Tower Bridge, dodging irate pedestrians, down to the bottom of Petty Wales, followed by crouching excruciatingly to the sound of Moby’s Sally Up Sally Down. I won’t be putting that song on my MP3 player.

Burpees, by the way, are some sort of masochistic jumping and crouching exercise for people who feel they deserve eternal punishment.

This time, the bending and pumping and stretching exercises were thankfully interrupted by a wedding party procession, with accompanying marching band. It’s a long time since I felt such relief at seeing members of the military.

Then to Peter’s Hill near St Paul’s Cathedral – with me muttering under my breath “Dear God, when will this end?” To my consternation, Triathlete Irishman John, suffering from acute back pain, told me I might be half-way. I eased off to let him hobble ahead of me.

Passing the start point on the way was hard. I could have lived with myself if I had stopped, but my conscience – and my ego – got the better of me. I wasn’t going to extract myself from the golden circle of beautiful people unless something broke, not including my heart.

It starts to get a bit hazy at this point.

We might have done some squats or press-ups or somersaults, flick-flacks and back flips near the IMAX cinema. Equally, I might have had a dream about that. Whatever – me and a couple of new buddies decided on a short cut back to the Tate. One was a TV producer called Jacqueline, who seemed to know the short cuts.

The other was a 62-year-old called Bromley – “I’ve got children called Beckenham and Penge,” he joked.

I had approached him to ask him if he was the oldest there, in the hope he might be more my kind of pace. Sadly, he had done 17 marathons and ran like a man half his age.

He was jogging alongside us to be nice. Especially the short cut he showed us, which enabled us to watch the front-runners streak past at a sprint on the final league, but also to avoid crawling in 10 minutes after the slowcoaches. I might have enjoyed applauding in the later finishes if I had not felt such a fraud. I am sure one or two suspected I looked much too fresh for an old bod.

Fellow participants at the end asked me: “So you’ll do it again?”

I replied with a firm “No.”

They seemed to think this was a joke.