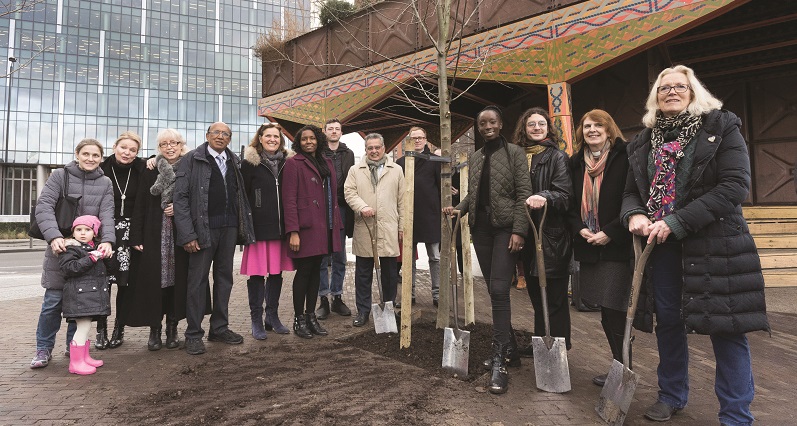 Elm trees have been replanted to replace the two blown down in the ‘Great Storm’ of 1987 – meaning that Nine Elms can again fully justify the use of its name.

Many trees across South London were felled by the massive storm which wreaked havoc in October 1987.

Elms in Battersea was one of the victims. It lost two of the nine trees, even if the name did not change.

Now, almost 30 years later, the Nine Elms community have joined forces to replant next to the Battersea riverfront the two lost.

Wandsworth council leader Cllr Ravi Govindia, along with Cllr Steffi Sutters, cabinet member for open spaces, led a team of nine residents and businesses to plant the remaining two trees along Nine Elms Lane, opposite the US Embassy.

Cllr Govindia said: “It was a privilege to play a part in restoring the namesake of this historic part of the borough.

I would like to thank the Nine Elms community for coming together to replant the elm trees – they included residents and established businesses as well as new residents and entrepreneurs who have recently moved into this fast-growing district.”

The tree-planting starts a year of elm-related activities in Nine Elms.

A piece of music called Nine Songs for Nine Elms, written by Lucy Cash and Fraya Thomsen, will be sung by The Battersea Power Station community choir at various venues during 2019.

The lyrics were developed with residents of Nine Elms and the Doddington Estate, Battersea.

Nine Elms gets its name from Nine Elms Lane, which was called that from around the year 1645, because of a row of elm trees along its border – but there had already been a track there for probably 400 years.

Vauxhall Motors was formed to make marine pumps in 1857 by Scottish engineer Alexander Wilson at Nine Elms, originally as Alex Wilson and Company, before starting car production in 1903 and then moving to Luton in 1907.

A plaque commemorating the site of the factory had been at the Sainsbury’s petrol station in Wandsworth Road but the site has now become a new supermarket and high-rise flats as part of the Nine Elms regeneration.

The USA announced in 2008 it would move its embassy to the area.

The £2billion, 2,000-home Embassy Gardens development and a similar-sized one around Battersea Power Station will transform the area from an industrial zone to mainly residential.