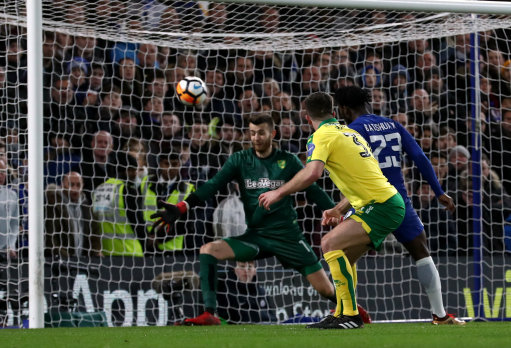 Nine-man Chelsea produced a sequence of exceptional penalties following 120 minutes of ineptitude to inch brilliant Norwich City out of the FA Cup in a match of breathtaking drama at Stamford Bridge tonight.
The Blues, 1-0 up thanks to a close range effort by striker Michy Batshuayi in the second half were pegged back in the 94th minute of regulation time to send the 3rd round replay into extra time.
With a host of yellow bookings by Graham Scott on Chelsea players, Pedro and substitute Alvaro Morata fell foul of the referee and were sent off in extra time. Pedro’s first yellow for a dive to try and pinch a penalty was followed by a yellow for a deserved foul – Morata’s was also for a dive to secure a spot kick, but he got a second yellow for contesting the decision.
Scott was the centre of attention as he refused flatly to refer any decision to the new VAR system – instead he stood by his decisions as the Blues went into mental meltdown.
The drama ended only by their class of nine excellently taken penalty’s – five from the Blues, four from the visitors – the only blemish saw the Canaries exit the cup after Nelson Oliveira kick was acrobatically saved by Willy Caballero – the first and only of Norwich’s efforts to faile tom find the back of the net.

Eden Hazard was the hero with the fifth and winning kick.
But the match overall was a terrible one for the Blues and the misfiring of a host pf players.
The first effort of the game, in a subdued Stamford Bridget fell to the home side with Danny Drinkwater slicing a right-footer wide go Angus Gunn’s goal on six minutes.
Cesar Azpilicueta somehow conspired to miss a golden effort three minutes later, when he just missed a toe-poke from two yards./ This was quickly followed by a chest down, spin a woeful volley by Willian.
A venomous free-kick by David Luiz, on target, on 12 minutes when straight to Gunn.
A sublime 25-yarder by Danny Drinkwater was tipped by Gunn onto his crossbar and the ball rebounded back and was cleared.
Michy Batshuayi made a terrible pass on 32 minutes giving the bar to Norwich striker nelson ‘ Oliverira. The striker took one touch and sent a powerful drive towards goal. The ball clipped off the top of Thibaut Courtois’s crossbar.
There were no changes by either side at half-time.
But eventually, the Canaries resistance was broken on 55 minutes, excluding injury time from previous matches – 331 minutes since Chelsea’s last goal.
The scorer – under fire and potential loanee Michy Batshuayi, who had the easiest of chances of tucking home from close range after latching onto Kennedy’s left byline cross.
Chelsea almost blew it three minutes later when a failure to clear a regulation ball into the area properly saw Josh Murphy thump the back back towards goal. It went wide of last man Ethan Ampadu but rebounded off the post.
Pedro was yellowed-carded for a dive inside the Norwich penalty area. Before Willy Caballero produced an excellent save, diving to his left to thwart James Maddison.
Antonio Conte brought on striker Alvaro Morata and centre-back Andreas Christensen for Batshuayi and Ampadu with 10 minutes left on the clock.
Morata then missed a sitter on the 90th minute.
But deep into added time, Timm Klose put in a deep cross from the left and up popped Jamel Lewis, unmarked to clip the perfect header past a prone Cabalello and off the far post in to they black of the net.
Within seconds of the start of extra time, Chelsea thought the has a penalty when Willian went to the ground from a challenge by Klose. Referre Graham Scott booked Willian for diving.
Chelsea players and Conte demanded Scott refer the incident to the VAR system, but he decided against it.
Eden Hazard became a pub quiz question when he entered the field for Chelsea, as the first 4th substitution in their history – coming on for Drinkwater on 100 minutes.
Gunn produced a sensational save to thwart Willian, as the Brazil winger left fly with a blistering right-footer.
Morata was soon in action again – missing from close range. And again with six minutes of extra time remaining – his free header from a Davide Zappacosta cross, was downwards in trajectory – but Gunn was equal to the task.
Pedro put in a late challenge on Wes Hoolahan and was suitably given a second yellow card and then a red.
Worse was to follow when Morata was given two yellow cards following Scott’s assessment that the striker dived. The first yellow was for the dive, the second must have been for foul and abusive behaviour.
Boos rang out around the ground at the final whistle.
The match went to penalties and the sequence was as follows:
Chelsea – Willian – goal 1-0
Norwich – Oliveira – miss – 1-0
Chelsea – Luiz – goal 2-0
Norwich – Maddison – goal 2-1
Chelsea – Azpilicueta – goal 3-1
Norwich – Vrancic – goal 3-2
Chelsea – Kante – goal 4-2
Norwich – Murphy – goal 4-3
Chelsea – Hazard – goal 5-3

Chelsea face Newcastle United, at the Bridge in the 4th Round.