Alex Mitchell’s loan move to Leyton Orient has gone like a dream and the highly-rated Millwall centre-back is confident he is yet to hit peak form.

The 19-year-old defender is yet to be on the losing side since joining the east London club at the end of August.

Orient, bossed by former Lions chief Kenny Jackett, have won three of the five matches that Mitchell has played in as well as keeping three clean sheets.

When you add in his short stint with Bromley at the back end of last season, the Millwall prospect’s record is just two defeats in 16 matches as a senior pro.

“Being at Bromley last season was a big step up from U23s football and, with respect to them, going into the league is another step up,” said Mitchell, who signed a long-term contract before his latest temporary exit from SE16. “Millwall have been really good with me, in terms of the loans they have given me. They have sent me to the right places and right people.

“I feel like the environment I’ve been put into is the reason why I’ve done well at the moment.”

Jackett had 307 matches as Millwall manager, winning the League One play-offs in 2010. He took the Orient job in May and brought along Joe Gallen, also his assistant when he was at the South London club.

“I got told quite late [in the window] that I was going to go out on loan so before that I had just been concentrating on doing my best at Millwall,” said Mitchell. “I know there were one or two clubs interested. Kenny Jackett had such a good reputation when he was at Millwall and it was a no-brainer really, being in London as well. I’m loving every minute at Orient.

“Kenny has been fantastic. He’s really into small details on the training pitch. Him, Joe Gallen and Matt [Harrold] are really good. A lot of it is tactical and I’m learning a lot. It’s a privilege to do that.

“You’re nervous going into a club but Kenny and Joe made me feel really welcome. They told me just be a defender, that I’m there to win them games from the back – keep clean sheets. Joe said the on-the-ball side will come with the confidence I get from defending, that it will come naturally. That was the main message.” 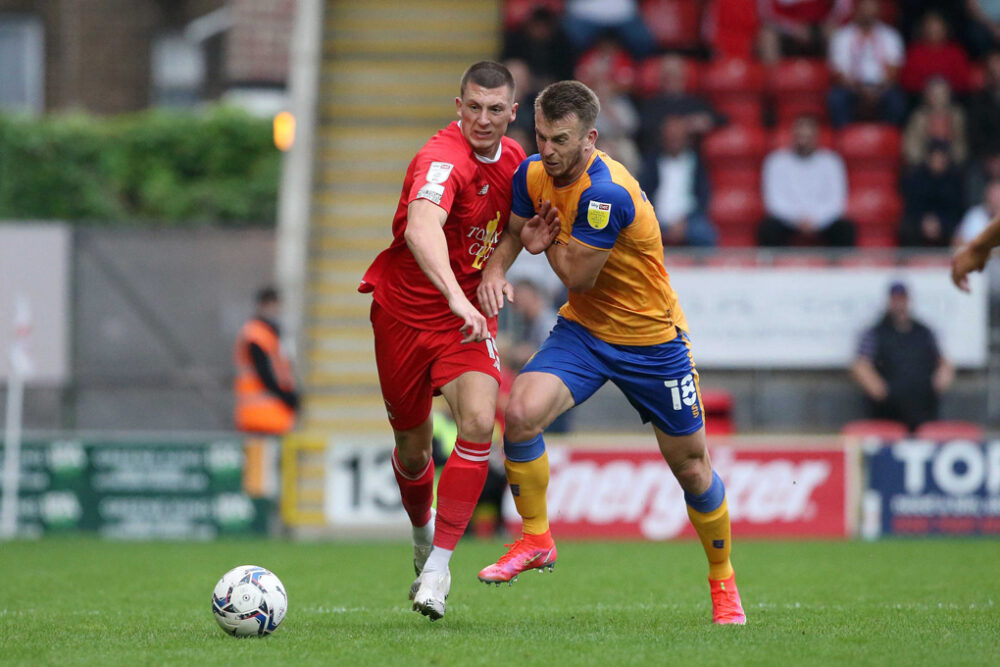 Mitchell has been called a ‘robot’ and ‘meathead’, but he takes both as a compliment.

“Murray Wallace got called a robot all the time at Millwall because he is such an athletic guy,” said Mitchell. “When we’d do one-v-ones it would be ‘oh the two robots’. It was a nickname that has carried on to Orient, which is quite funny.

“I love it. Same with meathead, it’s what is says on the tin. I head balls. As long as I’m scary to attackers I don’t mind at all.”

Windsor-raised Mitchell had trials with the likes of Brentford, Reading and Wycombe before he was picked up at youth level by the Lions.

He made his Millwall debut as an 80th minute substitute for Daniel Ballard in the EFL Cup victory over Cambridge in August.

“I haven’t actually played that much over 90 minutes,” he said. “I’m only six games in, so I’m not feeling 100 per cent and at full potential yet.

“But I feel I’m getting a consistency of being constantly good – trustworthy and reliable.

“As more games come I’m hoping that momentum will follow it.”

The O’s are second in League Two and look well-placed to be in the promotion mix.

After Bromley were knocked out of the National League play-offs in May, it might be second time lucky for Mitchell to pick up silverware.

“That would be the dream,” he said. “Every day we’re in the gaffer, Joe and all the senior players have just the one target – to get promoted. To have the potential to do that would be a once-in-a-lifetime opportunity that we can’t turn down.

“We’re working so hard every single day. It’s the only thing I’m looking at in this moment. Obviously I am a Millwall player but this season I’m wholeheartedly an Orient player.

“I’m grafting so that when we get to the end of the season and look back that we’re really happy with what we’ve done.”

Millwall manager Gary Rowett admitted he agonised about keeping Mitchell in his first-team squad but eventually decided a greater amount of game minutes lower down the football pyramid would aid his development best.

“The gaffer, Ads [Adam Barrett] and Paul Robinson got it spot on with me,” said Mitchell.

“I was with the first-team for two months straight and I feel not just mentally but physically that has improved me a tremendous amount because I worked technically, I got more powerful and learned little tips and tricks here and there – like what Shaun Hutchinson, Jake Cooper and Alex Pearce do off the pitch. They are where I want to be.

“Rightly so I wasn’t playing because we have such good quality at the club. It was the perfect time for me to go and play men’s football for 90 minutes.”