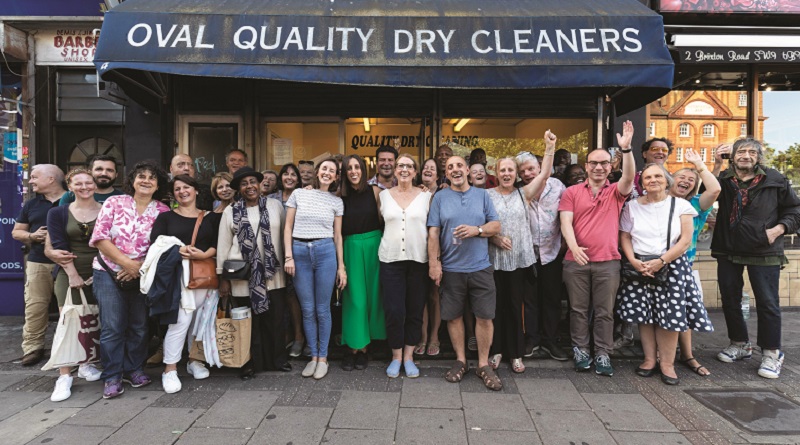 A dry cleaning shop that has handled the dirty laundry of a former Home Secretary, a Hollywood actress, and pioneer comedian, has closed after 40 years.

Angelos Micheal, owner of Oval Quality Cleaners, hung up his iron for the last time on Saturday, shutting his shop in Brixton Road.

He was surrounded by friends and family on his last day – and bags of forgotten clothes which will raise money for charity.

Angelos – known as Mick to friends and customers – has handled the garments of former Home Secretary and Labour MP Jack Straw, and Hollywood actress Greta Scacchi, known for starring alongside Harrison Ford in the 1990 hit Presumed Innocent.

“I’ve known Jack Straw for more than 30 years, along with his lovely wife and his children,” said Mick.

“One day he came by for his fitting and he was in such a hurry that I left my motorbike outside with the key in. His bodyguard joked that I shouldn’t worry because he would shoot anyone who would get close. I quickly said he shouldn’t as it might be a customer!”

With the ITV studios across the road for several years, his shop has also been used by trailblazing comedienne Marti Caine, glitzy actress Tessa Wyatt, and the Queen’s lookalike, Jeanette Charles.

Mick has been the sole owner of the family-run dry cleaning service since his mother, Mirianthy, died in 2008 and his father Charalambos retired soon after.

He said: “I first walked into this place when I was 22. My parents, brother and I set it up from scratch and worked together every day.”

His father, a Savile row tailor and his mother, a seamstress, opened the shop in 1978 and were in charge of repairs while their sons Mick and Alek ran the cleaning services.

Mick said: “People from the area came round all the time. Friends and family from London and abroad all used to meet here. I’ve seen people’s children grow up. It’s a very personal business since you’re dealing with their everyday clothes.”

Mick and his brother would always go the extra mile and on many occasions by collecting and delivering freshly cleaned clothes for the local elderly.

He is donating the abandoned clothes accumulated over the years to raise money for the British Heart Foundation.

Mick once altered a jacket for a customer’s four legged best friend: “Every time the pup cocked his leg he would wee on his new jacket, so it needed to be shortened.

“Trying to get the dog to stay still was difficult, but we were all laughing as we were doing it.”

Fashion changes have hit the dry cleaning business. Mick said: “People are dressing down. They don’t wear as many suits these days.

“I would say the business has decreased by about a third because casual dressing is not good for dry cleaning – when I first started it was rapidly increasing but now its an
industry in decline.”

Mick, 63, is looking forward to retirement. He said: “While I won’t miss the cleaning and pressing, I will miss the people and the community.”

After 47 years of full-time employment, his retirement means he can finally travel the globe, with his wife – and motorcycle.

His first stop will be Normandy, France. He said: “I’m going to bring clothes for all types of weather.”