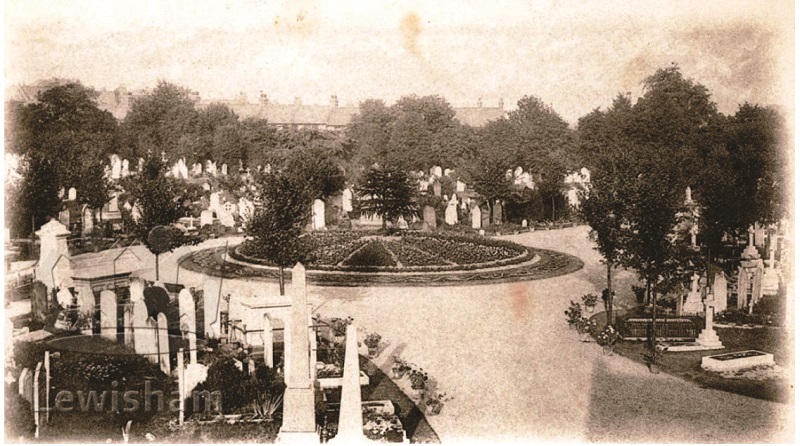 Deptford had already been historically infamous for the killing of one of England’s greatest playwrights, dramatist Christopher Marlowe in 1593. It also sparked the first murder trial in Britain using fingerprint evidence. But from the same area there emerged another serial killer known as the Deptford poisoner, who shocked the nation – but escaped the gallows. FRANK PACHAS tells her gruesome story

The body of a woman guilty of a series of notorious murders by poisoning in the late 19th century lies somewhere in the Brockley and Ladywell cemetery.

Where exactly, no one really knows. All we know is that her body lies underneath within the 37-acre cemetery in unconsecrated ground and that her burial on July 22, 1889 was kept secret, with police present to dissuade demonstrations.

Her crimes were so despicable there are no known pictures of her – finding one is as difficult as trying to locate her grave.

Her name was Amelia Winters, wife of Joseph Winters, and she lived in 153 Deptford Church Street –the house is no longer there – in a time when the area was a busy maritime neighbourhood.

Poison seems to have been the first choice for many murders committed across Victorian Britain – and mainly by women.

There even seemed to be a syndicate of women working together, in a spate of killings which shocked the country between the mid and late 19th century.

Mrs Winters belongs to the evil category of female poisoners such as Christiana Edmunds, known as the Chocolate Cream killer; Adelaide Bartlett, notorious for the Pimlico Mystery; and Mary Ann Cotton, responsible for murdering about 20 people including 11 of her 13 children.

They were all linked to the Winters.

Bolton was the son of a niece living with the Winters; Mr Sutton was an elderly relative; and Mrs Frost was the mother-in-law of the Winters’ daughter, her namesake Elizabeth Frost.

The doctor who examined the bodies found they had been poisoned – there were traces of arsenic.

Mr Sutton looked like he had been killed with an irritant poison. Mrs Frost’s intestines also indicated the possible presence of arsenic. Arsenic was easily bought in Victorian England.

Ladies of fashion used it for cosmetics – but also for killing their husbands or lovers.

After the exhumation, an inquest took place at the Breakspear Hotel, Brockley on July 9, 1889 – the building is now a Wetherspoons pub called the Brockley Barge. The inquest revealed all three victims had been insured by Mrs Winters.

A conniving killer could choose a lodger or a relative to be insured without the person’s knowledge.

They could even pay the premium themselves. Then, the assassins could collect the payouts. Investigators discovered Mrs Winters had insured the lives of 22 people for a total of £240 with the Liverpool Victoria Friendly Society.

Five of these individuals died by 1889. The first victim, in 1885, was a five-year old child. The second was Mrs Frost in 1888 and the third was Amelia Bolton, another 63-yearold relative.

Mr Sutton and Sydney Bolton came next. The old man died on November 10, 1888 shortly after moving into Mrs Winter’s house. He had lived in a workhouse before.

Mrs Winters also had 14 policies with The Prudential, another insurance company; and both societies paid out to her for the same five deaths.

The kid’s insurance had lapsed, but Mrs Winters still managed to collect £20 from one company and £10 from another.

Mr Sutton appeared to have been insured for more than £8 and Mrs Frost for £5.

The jury returned a verdict of “wilful murder” against Mrs Winters and her 30- year-old daughter Elizabeth Frost.

Her daughter appeared in court with a baby at her breast and was immediately arrested. Her husband who witnessed the arrest – one of the charges was the murder of his mother – was visibly distraught with grief.

Mrs Winters’ daughter was initially indicted for murder, but the charge was later dropped. Instead, she was tried at the Old Bailey in July 1889 on charges of document forgery for the payment of money with intent to defraud.

She was found guilty and as a result served seven years of penal servitude. The jury also concluded the system of some insurance companies was loose and an incentive to commit deliberate murder.

The Deptford poisoning cases led to a stricter revision of the 1875 Friendly Societies Act.

Mrs Winters died on July 15, 1889 before she could be brought to trial, but she made a death bed confession of guilt to her husband and daughter. She told them she did not know what induced her to commit the crimes as she had plenty of money.

She also exculpated her daughter from any complicity. George Dear, a 34-year-old miller, who could have shed light on Mrs Winters’ actions as he had been her lodger, unexpectedly committed suicide by hanging himself at his Greenwich house one day before Mrs Winters’ passing.

He was reported to have been very depressed by developments in the poisoning cases. He had also been insured by Mrs Winters for 19 guineas and had complained of sickness and pain in his chest before his suicide.

At Mrs Winters’ interment, a newspaper reported that about 20 young men, neighbours of Mrs Winters, scaled the walls of the cemetery and tried to disturb her quiet funeral attended only by her mourners – her husband and her two sons. As the police kept the demonstrators at bay, they allegedly promised to dig up the corpse and tear it pieces one day.