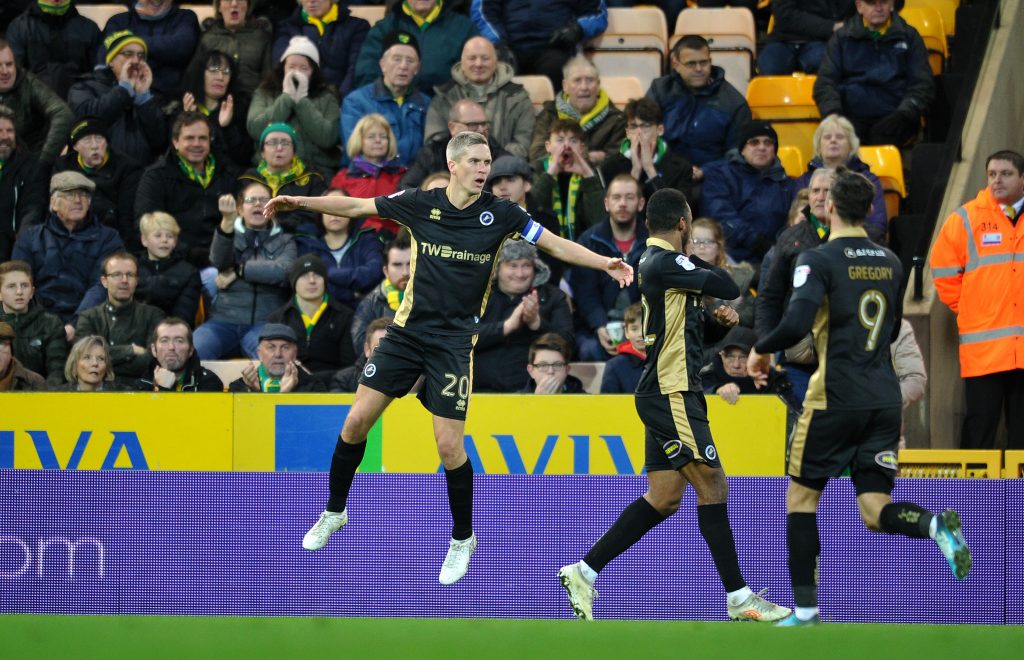 Steve Morison’s goal-of-the-season contender was not enough for Millwall as they threw away a one-goal lead and were narrowly defeated by Norwich City at Carrow Road, writes Jake Sanders.

Morison had given his side the lead just before the interval with an incredible strike, but Tom Trybull’s header and James Maddison’s neat finish earned the points for the Canaries.

Shaun Williams and Fred Onyedinma came into the starting 11 at the expense of Jed Wallace and Aiden O’Brien as Millwall were playing their fourth game in 10 days.

Neil Harris’s side made a bright start – winning two early corners – but it was the hosts who had the first effort of the game;  Nelson Oliveira couldn’t direct his close-range header on target after a fine cross from Josh Murphy.

Alex Pritchard then saw his long-range effort tipped over by Jordan Archer as Norwich started to dominate and Millwall were struggling to contain Pritchard and Murphy.

The latter was next to try his luck from outside the box, but Archer made another fine stop at the expense of a corner.

James Meredith had Millwall’s first attempt of the game, but was denied by a sharp stop from Angus Gunn in the Norwich goal after Ryan Tunnicliffe played him in down the left.

Tunnicliffe then had a chance of his own minutes later, but when the ball fell to him in the box, he couldn’t keep his left-footed shot down. Meanwhile, at the other end, Pritchard’s snap-shot landed just wide of the post.

It looked like the teams would head into half-time on level terms, but Morison had other ideas. The 34-year-old treated the Carrow Road crowd to a moment of pure individual genius as he thumped home a stunning volley from 30-yards that looped over Gunn in the Norwich goal and gave Millwall the lead at the break.

It did not take the hosts long to get themselves back into the game as just seven minutes into the second-half Trybull rose highest to head home from a superb Maddison free-kick.

That goal seemed to knock the stuffing out of the Lions and if Murphy had connected from Pritchard’s dangerous cross, they would have fallen behind, but he missed his kick and they survived.

Norwich came within a whisker of taking the lead as Murphy’s third long-range effort of the afternoon clipped the top of the crossbar with Archer beaten.

The hosts did complete the turnaround just minutes later. The lively Pritchard played a wonderful reverse pass for Maddison, who swept home into the far corner.

Pritchard nearly added gloss to the scoreline, but was one again denied by Archer and despite some late pressure from the visitors, they left Carrow Road empty-handed.