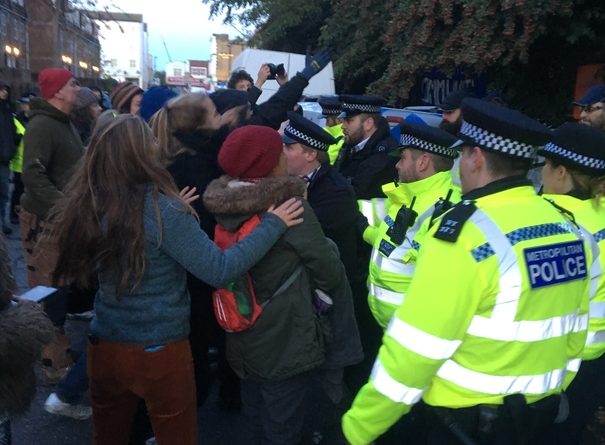 Distraught residents witnessed “shocking” scenes as enforcement officers evicted occupiers of a community garden which is set to be flattened in a development scheme.

One woman in the Old Tidemill Garden in Deptford was upended and dragged down from the fence she had climbed and tied herself to.

Another woman climbed to the top of a tree and defied eviction for more than seven hours.

Deptford resident Heather Gilmore, 62, said: “I am devastated. The feeling is anger mixed with pure heartbreak.

“We barricaded the whole place, but they broke through one of the side gates and came in at the crack of dawn.

“I got down at 6pm and the place was swarming with police. I got a message just saying ‘help’ from the people inside.”

A standoff between police, who had surrounded the garden, and a crowd of around 40 campaigners ensued. Some residents charged at the fence in a desperate attempt to return to the garden but they were blocked and dragged away by police.

Ms Gilmore, who is registered blind, said: “I love this garden. I come hear and it makes me feel safe and calm.

“We’ve created a community down here and it’s going to be torn from us.”

The eviction comes around three months after the occupiers moved into the garden and almost two weeks after Lewisham council won a High Court hearing, allowing it to take place.

Family Mosaic housing association and developers Sherrygreen Homes plan to build 209 homes on land to the north of Reginald Road and south of Frankham Street.

Their scheme would mean that 80 per cent of the Old Tidemill community garden would be demolished. More than 100 of the homes are set to be affordable.

Harriet Vickers, 32, who lives next to the garden in Frankham House, said: “I’m really shaken. I was trying to film what was going on because it is incredibly important that people see what happened and they should be held accountable.

“I was grabbed by one of the bailiffs, they wouldn’t let go and said I couldn’t be filming, which is rubbish.

“He wouldn’t let go of me. It’s horrible and intimidating. I don’t think we expected it to be this heavy.

“I saw them arrive this morning. Two coach loads of bailiffs charged straight in. There was no liaising. They didn’t give people the chance to leave.”

A group of volunteers started running events and maintaining the garden in 2012 after the Tidemill school was closed and moved to a new building.

Resident groups, Deptford’s Neighbourhood Forum DNA and Save Tidemill, submitted an independent planning application, that would have protected the 2,400sq metre garden.

Campaigners are in the process of appealing against the High Court decision.

But planning permission for the Family Mosaic and Sherrygreen Homes scheme was passed in September 2017.

Andy Worthington, of Brockley, said: “There’s a lot of people here evicting the peaceful occupants of the garden.

“It’s an incredibly beautiful space, it is too valuable for the council to destroy.

“The garden means different things to different people. Some use it to escape from the rush of the city, others come here to meet each other.

“We’ve been here for two months and it is the culmination of years of trying to convince the council that alternative plans could be made that would allow the development, while saving the garden.”

In their high court appeal, campaigners claimed that one of the tower blocks in the 209-home development would block out a current resident’s right to light.

But Lord Justice Holgate rejected this on the grounds that Building Research Establishment (BRE) guidelines on right to light, were simply guidelines and were not mandatory.

Lewisham councillor Paul Bell, cabinet member for housing, said: “We gave the protestors notice to vacate the site in August. Unfortunately we had to take enforcement action after they refused to leave. We ask them to respect the court’s ruling upholding our eviction notice, so that we can move ahead with plans to provide the desperately-needed 800% increase in social housing for those who are waiting for a secure place to call home.”