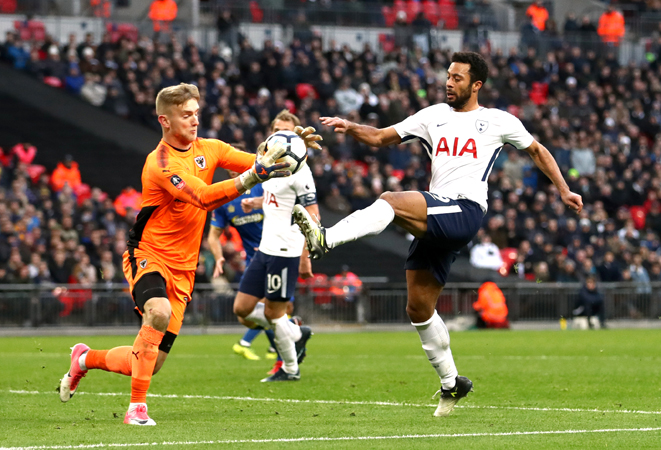 George Long reckons AFC Wimbledon’s good habits on the training ground are beginning to bear fruit in League One.

It was also their fourth successive clean sheet. Long has kept three of them, Joe McDonnell deputising when he was unwell for the stalemate at Milton Keynes.

“It is the first time that Wimbledon have kept four clean sheets in the Football League – which is fantastic for everyone at the club,” said Long, on a season-long loan from Sheffield United.

“Performances have always been there throughout the season but we have not quite turned them into results and points. It is just fine-tuning training.

“Credit to the manager and coaching staff for driving that home to us. We have worked on crossing and finishing in training. We are finishing chances off and being more clinical.

“Coxy [Neil Cox, assistant boss] does a lot of work on the defensive line with Deji [Oshilaja] and Darius [Charles].

We do team-based drills – attackers versus defenders. Coxy has played at the highest level and has that expertise and insight which is vital.

“That work shows when you are in goal and have very little to do in a game. That’s ideal for a goalkeeper, quiet and picking up clean sheets.

“A good result definitely sets up the following week in training. But the hard work doesn’t stop, it’s always onto the next one. We go to Rotherham on Saturday and that is a very tough game, they have got brilliant home form but we know we’re capable of going there and trying to disrupt them.

“It is a busy schedule in February and we have to do the right things to recover off the pitch.

“Probably the biggest thing is nutrition and rest. You’ve got to eat the right things 24 hours after a game – protein shakes, fill up on carbs. Good protein – fruit and veg – and get enough sleep. That’s when the bod recovers.”

Wimbledon have climbed to 16th in the table. A four-point gap separates them from the relegation zone but they are only six off 10th-placed Gillingham.

“If we can get in the top half of the table we can see where we go from there,” said Long. “The play-offs is a tall order at the moment but stranger things have happened – I’m not putting pressure on the boys saying we are going for that.

“We just need to churn out good performances. That doesn’t always guarantee results but more often than not you are going to get the right result.”

Long has played 31 times for the Dons, the most of his loan moves which has also taken in Motherwell (15) and Oxford United (10).

“It’s been brilliant so far,” he said. “Wimbledon has been the whole package. I’ve loved moving down south, it’s a great way of life.

“I feel as a goalkeeper I’m improving all the time.

“Credit to Bayso [Ashley Bayes, goalkeeping coach] – he works us hard in training. We’re out early doing our work. It’s great when things we do in training come off in games, and it is no surprise when you are putting in the effort day in and day out.”