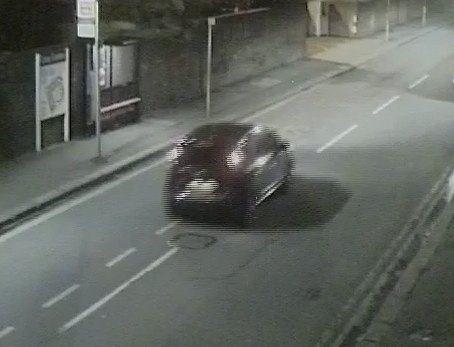 Two occupants of a car involved in a minor collision were both stabbed by the driver of the other car following a high speed chase through busy streets.
Detectives appealing for witnesses and information have released an image of a vehicle involved in the incident.
Officers and paramedics were called at 8.52pm on Thursday, 8 March to Ascalon Street, Nine Elms following reports of a stabbing.
The first victim – a 21-year-old man – was found with stab wounds to his back.
A second man, also aged 21, was also found with stab wounds.
They were both taken to a South London hospital for treatment and have since been discharged.
Police have established that the two victims were driving in a beige Fiat 500 on Wandsworth Road, near the junction with Landsdowne Way, Nine Elms, when they became involved in a verbal altercation with the occupants of another car following a minor collision.
The victims were chased at high speed by the men in the other car which is described as a black hatchback with blacked out windows.
The victims drove to Ascalon Road and jumped out of their car. The suspects also stopped, got out of their vehicle and attacked the two victims before driving off.
The driver of the suspects’ vehicle is described as white or mixed race, aged in his early to mid-20s, 6ft tall, of large build and with a shaved head and stubble. He was wearing a navy blue tracksuit.
His passengers are all described as young black men.
Officers are appealing to anyone who saw either a beige coloured Fiat 500 or a black hatchback being driven erratically and at high speed on Wandsworth Road and in the Patmore Estate at around 20:45hrs that evening. They would also like to speak with any motorists who were in the area and who may have dashcam footage.
Detective Constable Simon Monga, from Wandsworth CID, said: “This was a violent and unnecessary attack. A minor traffic collision has resulted in two men being stabbed. It is only by sheer luck that their injuries are not more serious
“I would appeal to anyone who was in the area of the initial incident and witnessed the altercation to contact police.
“If you have any information about the stabbing and the identity of the suspects, please call police without delay. It is vitally important that we trace these people.”
There have been no arrests.
Anyone with information can contact Wandsworth CID on 0203 276 2603 or 101 quoting ref: 7495/8March. Information can also be tweeted to @MetCC.